They say that you will never know the sacrifices that your parents made for you until you have your own children. I do not have children of my own but I think I know the little things that my mother had given up because of me. She had tended to my every need from the first day I broke my neck nineteen years ago. She stayed with me throughout the three months that I was hospitalised at the Kuala Lumpur Hospital, which is 400km away from home. She had to endure the abuses of rude nurses. There were good nurses, too, which made the three months more bearable.

Back home, she would dress my pressure sore three times a day without fail until it healed, cleaned me up after I empty my bowels, bathe me and spoon-fed me initially when I could not hold a spoon. She cooked my favourite dishes all the time and made herbal soups for me several times a week. Anybody who has prepared Chinese herbal soups will know how much time and effort is spent, as the charcoal fire has to be constantly fed and at the same time ensuring that there is sufficient water in the pot.

She had never given up on me even though I had given up on myself many times. She was always there for me, no matter the time of day. She is a symbol of perseverance. As soon as she recovered from her back surgery, she was back tending to my needs although she was walking with a limp. Even when she was diagnosed with Chronic Lymphocytic Leukaemia, she did not give up. She went about her daily chores like she used to.

I seldom hear Mum gripe about anything. She takes all the good and the bad in her stride. Distressing times do not put her down. She does not gloat over the good. She is humble and ready to lend a hand. Ask any of her friends if she has ever turned them down when they went to her for help.

And then there are those intrinsic things only a mother would do for her child. She thought of all the possibilities. She kept stock of my supplies of suppositories, lubricants and catheter so that I do not run out of them. She had a hoard of herbs that she specially used to make soups for me. She made sure that all my needs are taken care of and she had never once complained about it. Nineteen years is a long time to be doing that day in and day out. Nineteen years is a long time to be nursing an adult child. 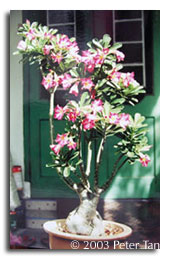 Mum was an avid gardener, a trait she inherited from her father. I guess she found solace in her plants. I guess the garden is where she let all her sorrows and unhappiness wash away. Mum was a good gardener; I think she still is. All the plants that she grew flourished and flowered. Mum was adept at cultivating Adenium (Desert Rose) which is a very popular plant among the Chinese who relish in the significance and auspiciousness of its name ? Fu Gui Hua, literally translated meaning Flower of Prosperity. We have moved to an apartment since and there is nary a place for Mum to continue with her hobby. She still keep a few potted plants in the apartment though.

I never knew how much Mum have been doing for me until now. The three weeks since her discharge from hospital, I have been playing nurse to her. I wake up in the wee hours of the morning to prepare light meals for her so that she does not go hungry. She does not eat much during meals because of nausea. Her appetite is poor due partly to her medication and constant back pain. Therefore, she is taking frequent but small meals. She has a pressure sore which needs to have Povidone applied to three times a day. I make sure she takes her medicine accordingly. There are soups to be cooked and dishes to be washed. The daily chores occupy most of my time now.

Three weeks into it and I am beginning to unravel. I suffered a migraine two days ago due to lack of sleep. I have been sleeping less than six hours everyday. There is a pressure sore on my buttocks from the long hours sitting. It is a wonder how Mum kept that up for nineteen years. It is time for me to take charge of my own life and lessen my dependence on her. This has made me appreciate Mum even more, knowing what she had to go through each and every day that she had to look after me. I know I will never be able to fully comprehend the sacrifices that she had made those years that she took care of me but I know that she would go out on a limb for me if ever that is needed, even now. Mum?s love for me knows no bounds. That is my Mum! Thank you for everything. Here is wishing you a speedy recovery.

One thought on “A Mother’s Love”