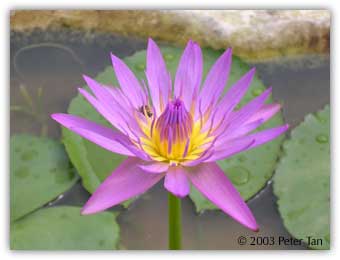 The beauty of a journey lies in the unexpected. When the senses are stirred, the journey itself is already fruitful. The loveliness of new sights, the intensity of new smells and tastes add colours to the interesting characters that we meet along the way. Unhurried steps, an open mind and an innocent expectation are all that are needed to make every trip a pleasure. This beautiful photo of a waterlily was the consequence of a journey that was as annoying as it was a gratification and unanticipated.

After having travelled to KLIA on the Express Rail Link (ERL), Wuan and I decided to experience the trip to the airport by road. We started out early to give ourselves some allowance should something untoward happen, like the taxi breaking down, and at the same time, we wanted to spend some time wandering around at the airport.

As fate would have it, the taxi ran out of petrol and gas just as we were about to reach the toll plaza to KLIA. We were stranded there for more than half an hour while waiting for the Elite Ronda Truck to rescue us with some petrol. I cannot imagine how one can drive a taxi without keeping an eye on the fuel gauges. And to run out of petrol and gas at the same time still bewilders us.

The petrol provided by Elite Ronda was only sufficient for the drive to the nearest petrol station, which was about 3 kilometres away. As the taxi pulled into the Petronas Station, Wuan spotted the blooming waterlilies and snapped a few shots.

This image is one of the most beautiful in my collection. Had the taxi not run out of fuel, we would not have had the opportunity to catch sight of this beauty of a flower. This reminds me of Robert Frost’s poem The Road Not Taken. Sometimes, trampling off the beaten track can bring about a surprisingly delightful outcome. We had not intended to do that but the effect was equally as gratifying.

The Road Not Taken
by Robert Frost

Two roads diverged in a yellow wood,
And sorry I could not travel both
And be one traveler, long I stood
And looked down one as far as I could
To where it bent in the undergrowth;

Then took the other, as just as fair,
And having perhaps the better claim,
Because it was grassy and wanted wear;
Though as for that the passing there
Had worn them really about the same,

And both that morning equally lay
In leaves no step had trodden black.
Oh, I kept the first for another day!
Yet knowing how way leads on back to way,
I doubted if I should ever come back.

I shall be telling this with a sigh
Somewhere ages and ages hence:
Two roads diverged in a wood, and I-
I took the one less travelled by,
And that has made all the difference.