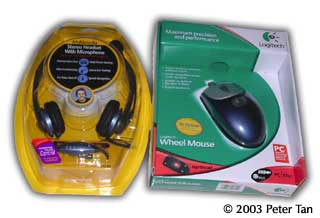 Went to PIKOM PC Fair with Emil. We each bought a set of Altec Lansing AHS30 headset and microphone. I have not tested it yet but Emil gave it top marks. He also got some CD-Rs at a bargain while I bought the Logitech Optical Wheel Mouse.

I had intended to shop for a 17? CRT monitor to replace the one I am using now as I believe it is going to give up the ghost anytime soon. The screen would alternate between yellow and normal, which is very stressful to the eyes. After checking out the LG Flatron 700B, I decided that it was a little too pricey.

Since my current PC tends to freeze and hang every now and then, which according Emil is due to a failing power supply, I thought I might as well get a new system, since this system has already outlived its life span anyway. After getting several different quotations, in a moment of illogical impulsiveness, I placed an order for a PC running on Pentium 4 2.6Ghz with Hyper?Threading.

That is going to set me back RM2, 600. I hope I will not regret this one moment of irrationality as I can hardly afford to splurge like that. The system will be delivered at the end of next week. I shall soon find out if it is worth the money spent then.