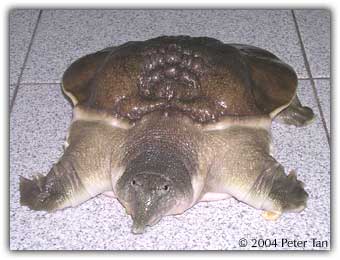 My pet soft-shelled turtle is critically ill. Four days ago, when Yanti wanted to feed him, she found him lying motionless with his eyes wide open, unblinking. He had been like this before but had gradually recovered within a day or two. After two consecutive days of lying immobile in the same spot, I had given him up for dead.

He was discharging bloody mucus from his snout. I emptied the tub and filled it with one inch of water and added a few drops of fish medicine that I got from my neighbour, hoping that he would be well again. He did not. His eyes are permanently shut now.

I had wanted to lay him to rest by a stream, to be where he naturally would have been roaming. Wuan advised me to keep him a while longer to be sure that he really had died. Kept him I did, for two more days. This morning, he was discharging blood from the snout again. He is still alive, but barely, and I hope that he is not in too much agony.

Apart from turtle pellets, Mum used to feed him with prawns and chicken entrails too. He was a picky eater. There were certain types of prawns that he will not even be bothered with. Mum used to bemoan this.

Home is a 16-inch blue tub with six inches of water, not an ideal abode but convenient to be cleaned and moved about. Mum simply adored him. Turtles, they go about minding their own business irrespective of whether you are there watching them or not. They are spirited and active.

I am in a sombre mood now. He had been with us for five years. For five long years, he was my one and only pet in this apartment. For five long years, he had kept me amused with his antics. Now he is motionless. It is so unlike him. If he is not going to get well again, I pray that death will come take him away swiftly. It hurts me to see him like this.