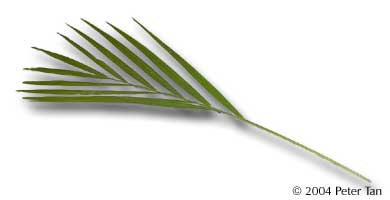 Today is the Sunday before Easter, known as Palm Sunday. There was a blessing of the palms in the Dewan Holy Spirit and then a short procession from the Dewan to the Cathedral to celebrate Mass. This is the beginning of the Holy Week. It commemorates Jesus? entry into Jerusalem on the back of a donkey. As He made His way into the Holy City, the crowd welcomed Him by waving palm fronds and laid their cloaks and branches on the path before Him. Palm fronds were symbols of victory and triumph during the time of Jesus.

The palm fronds that have been blessed will be kept in a place of reverence and then burned on the following year?s Ash Wednesday. The ashes are used to mark the symbol of the cross on the forehead of the faithful. This act of marking the cross fortify our faith in Christ and signify repentance before God. This is also to replicate the mark that was made on the forehead during baptism. Ash Wednesday marks the beginning of Lent, which is forty days to Good Friday.

At Anne?s invitation, I attended the RCIA Session after Mass. RCIA is the abbreviation for Rites of Christian Initiation of Adults. Today’s session was on the significance of baptism and the rites that we, the Elects, will be going through during Easter Vigil next Saturday. The RCIA is a process where men and women undergo a series of instructions and sharing of the Christian faith and then go through several significant rites before being initiated into the Catholic Church. That was the first time I attended the RCIA Session as the other times, Anne and Adel came to my apartment to instruct me. 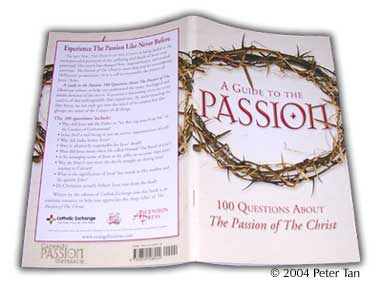 The Cathedral also screened The Passion of The Christ after Mass. As I have watched this movie with Wuan last Tuesday I skipped it and attended the RCIA Session. While it was an enlightening rendering according to the Bible, I felt that certain parts of the account was overdone, namely the scourging scene where a full ten minutes was devoted to it. That is my only gripe to an otherwise gripping film. I shed tears on many scenes, the first when Peter denied that he knew Jesus and then realised that Jesus had foresaw that and told him so.

Those who have read the Bible can relate to The Passion of The Christ. Passion here means suffering, where Jesus was betrayed, mentally tormented, physically abused and then crucified on the cross. This movie, while helpful in buttressing the understanding of the Bible, has also invoked many questions. The Catholic Church was mindful enough to publish a book to answer questions that may arise from watching this movie. A counter was set up outside the Cathedral selling A Guide To The Passion ? 100 Questions About The Passion of The Christ. I bought a copy to help me understand the deeper meaning of Christ?s sacrifice and suffering in those final hours.

4 thoughts on “The Hour Is Near”