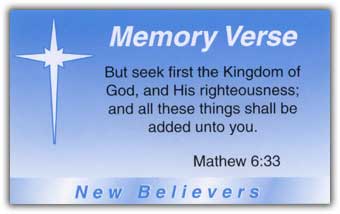 Mum?s physical passing gave me a spiritual rebirth. In the most desolate time of Mum?s and my life, I cried out to God with all my heart to heal Mum. And He answered. He answered not what I prayed for but gave me a vision that greatly consoled my anguish. And He gave me a vision of what was to come. Holding on to that revelation, I came to believe in the sanctity of Christ just before Mum passed on. As she breathed her last, I whispered into her ears, ?Do not be afraid anymore. Go in peace. You are with Jesus now.? I do not know why I told her that during those final moments. It just felt so right.

Through my cousin Anna, I requested to be catechised on God, Christ, the Holy Spirit and the Catholic Church. Anna got in touch with Anne, one of the Facilitators for the Rite of Christian Initiation of Adults (RCIA). My catechism began almost immediately. That was in 21 December 2003. Anne and Adel have been coming to instruct and share with me since late-December. That culminated in my Baptism during the Easter Vigil Mass last Saturday. It was a momentous occasion for me.

Wuan made a quick trip to Penang to witness my Baptism. She came right after work on Friday and reached here at 10pm. Early next morning, together, we participated in the Day of Recollection and Rite of the Ephphatha to prepare the Elects for the Easter Sacraments later in the evening. The Day of Recollection is when the Elects mull over the journey of faith in Christ that they had committed themselves into thus far and the journey that they will take after that. The Elects were each given a card called the Memory Verse which had been prayed over by the Holy Spirit Prayer Group. The Day of Recollection was also a lesson in humility as the Elects re-enacted the washing of the feet that Jesus performed on his disciples after the Last Supper. As I could not perform the rite, Wuan completed it on my behalf even though she was not a Catholic.

The ephphatha is the preparatory rite before Baptism. Ephpatha means “Be opened” in Aramaic, the language that Jesus spoke. The ears and mouths of the Elects are blessed so that they may hear the Word of God and profess it. Our Parish Priest, Monsignor Stephen Liew performed the rite on all the Elects. 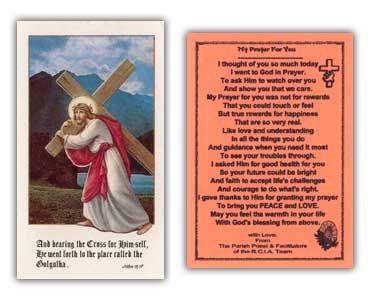 Before concluding the Day of Recollection, we were each presented with a very beautiful card of the Christ bearing the cross on his way to Golgotha. It was meant for us to write our prayer and reflect upon that prayer every now and then. We were also presented with two other cards, one with a verse of the Gospel printed on it, and the other from the Parish Priest and RCIA Facilitators bearing the following prayer:
My Prayer For You

I thought of you so much today
I went to God in prayer.
To ask Him to watch over you
And show you that we care.
My Prayer for you was not for rewards
That you could touch or feel
But true rewards for happiness
That are so very real.
Like love and understanding
In all the things that you do
And guidance when you need it most
To see your troubles through.
I asked Him for good health for you
So your future could be bright
And faith to accept life?s challenges
And courage to do what?s right.
I give thanks to Him for granting my prayer
To bring you PEACE and LOVE.
May you feel the warmth in your life
With God?s blessing from above.

Those beautiful verses almost moved me to tears. I felt so much love from the Facilitators and my fellow Elects, and Christ’s spirit in that room that afternoon. It was an amazing experience. I did not join the Elects and their sponsors for the rehearsal in the Cathedral after we adjourned. Anna was already waiting to fetch me back. I could not stay out for that long as the Easter Vigil Mass later was going to be a lengthy celebration.

2 thoughts on “Day of Recollection”