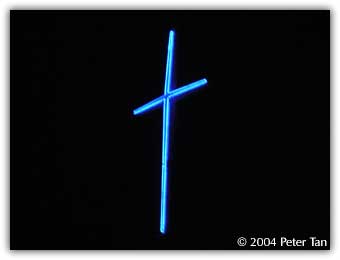 On our way to the Cathedral that evening, the passing headlights were streaks of blur in the darkness. Many things were running through my mind. First and foremost, I was finally going to be a Christian! And just to think that one year ago, I never had the slightest inclination to get to know Jesus more than what I already cursorily knew.

We reached the Cathedral slightly past eight. The Elects and their sponsors were requested to go earlier for a group photo session. At around half past eight, we trooped into the Cathedral. Since I was on a wheelchair, a spot was already reserved for me and Wuan and Joseph, who stood in as my sponsor, right up at the front just behind the liturgical ministers? pew. 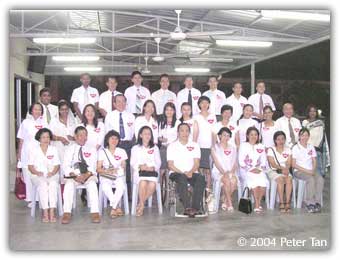 The Easter Vigil Mass began with the Liturgy of the Light. The lights inside the Cathedral were turned off while Parish Priest Monsignor Stephen Liew blessed the New Fire outside. The blessed flame was in turn used to light up the Paschal Candle. The Paschal Candle represents Christ and the flame symbolises His resurrection and Him as The Light of the World. This flame from the Paschal Candle was then used to light up all the candles in the Church. As the candles were being lit one by one, a beautiful warm glow began to spread throughout the Cathedral. The sight of hundreds of flickering candles in the dark warmed the very depth of my heart.

Next was the Liturgy of the Word. There were five readings from the Holy Bible. As it was a combined Mass, the readings were in English, Mandarin and Tamil. It was interspersed with responsorial hymns in the respective languages. The Homily followed where the Monsignor gave a sermon about the growing Catholic community with the initiation of more than fifty Elects who will be known as Neophytes after Baptism on that auspicious day.

Following the homily was the Liturgy of Initiation. It began with the Litany of the Saints. We sang in response to the Cantor asking God and Christ, Mother Mary, all the angels and saints to pray for us. The Monsignor than blessed the water that was to be used for the Baptism by praying over it and then dipping the Paschal Candle into the water while continuing with the blessing prayer. 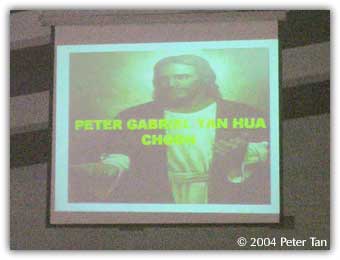 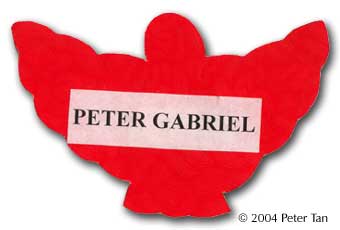 The Elects, together with their sponsors, then proceeded to assemble before the steps to the Sanctuary. I was the first to be Baptised as I could not reach the Baptismal font. Joseph placed one hand on my shoulder and the other holding my Baptism name printed on a card. 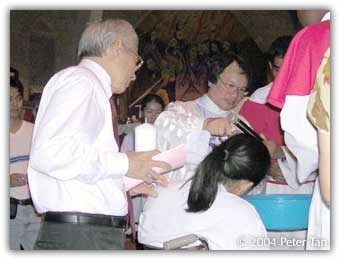 The Monsignor asked, ?Peter Gabriel, what do you ask of God?s Church??

I responded with, ?Baptism.?

?Peter Gabriel, I baptise you in the name of the Father, and
of the Son, and of the Holy Spirit.?

He poured the Holy Water on my forehead thrice, once for each time he invoked the name of the Holy Trinity. After that, the Elects were baptised one by one at the Baptismal Font following the same rite. Immediately after that, we were each anointed with the sign of the Cross on the forehead by the Monsignor who then shook our hands and blessed us with a ?Peace be with you.? 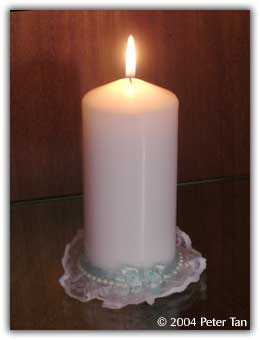 Our sponsors lighted the Baptismal Candle with flames from the Paschal Candle and presented it to us. It is a huge white candle which had been prettily decorated with a blue ribbon, lace and faux pearls. We returned to our seat to continue with the Easter Vigil Mass.

That day, I also received my first Holy Communion during the Liturgy of the Eucharist. That brought back memories of long ago when I witnessed the congregation of The Church of the Holy Name of Jesus in Balik Pulau receiving theirs. I was a very young child then. And as all young children, out of curiosity, I had wanted to follow them to ?eat the white wafer? like everyone else but Mum stopped me. I could not understand why. Now, I understand that. The Eucharist is one of the seven Sacraments of the Roman Catholic Church that is most revered. In receiving the Eucharist, we are receiving the Blood and Flesh of Christ. This follows the rite that was instituted by Jesus during the Last Supper.

As I took in the host, I felt only peace and serenity. After months of witnessing the other faithful receiving theirs and truly desiring for it, I could now finally come into communion with Christ. For the first time, I felt absolute contentment. The months of grieving and months of anxiety vanished just like that. It was perfect bliss, all that I could ever ask for, all that I could ever desire.

After Mass concluded, there were a lot of handshakes, hugs and congratulatory wishes all around. I sat there in awe. I could finally call myself a Christian. At last, I am a Catholic. The thought was just too overwhelming. I pray that God will generously bless all who have journeyed with me on my way to becoming a Christian, especially Uncle Paul, Peter, Anna, Anne, Adel, Pauline, Joseph and the Facilitators of RCIA. I would like to thank Wuan for her support. Although she is not a Christian, she had journeyed with me faithfully in discovering God and I sincerely pray that one day, she will walk the same paths that I took and be a disciple of Christ too.

That was beyond doubt a significant day and an exceptionally wonderful experience. The only thing that saddened me was that Mum was not there to witness my Baptism. It would have been very meaningful. Still, I know that she would be so very happy to know that I have accepted Christ wherever she is now. I pray that God will keep her safe and that He will continue to bless us Neophytes with strength and courage to grow spiritually so that we may praise and worship Him and evangelise His Words to all who desire to seek Him.

* Photos of the Easter Vigil Mass have been added to the Gallery.

5 thoughts on “Death and Rebirth”