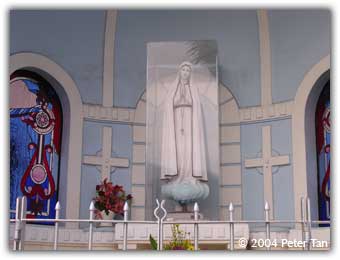 Day 2 – 0726 hrs, Tuesday, June 22
We awoke early and dropped in at the Church of the Assumption to say a prayer before beginning our adventure for the day. We had a full day ahead and hoped that the weather would be forgiving. Both of us looked every bit like tourists except we were not wearing hats. 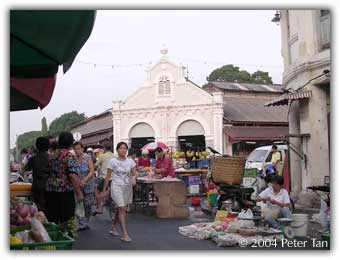 Day 2 – 0748 hrs, Tuesday, June 22
The road before the Campbell Street Market was closed to traffic. Hawkers had set up stall to sell their wares. There were stalls selling fish, roasted pork, vegetables, groceries, clothes and incense. Not finding anything that interested us, we decided to go back to the hotel for our breakfast.

Day 2 – 0917 hrs, Tuesday, June 22
Feeling stuffed after the scrumptious breakfast which consisted of Western and Oriental fare, we went back to our room to freshen up. I felt a little tired and wanted to nap for a short while. Before I knew it, I had slept through lunch. Wuan had also finished reading her papers by then. We packed our things and got ready to roam the streets of Penang again.

Day 2 – 1434 hrs, Tuesday, June 22
Just as we were to go out, it began to rain. Strong winds were swaying the branches of trees outside. We figured that if there is wind, the rain clouds would soon be blown away. We loitered around the lobby until the rain stopped. 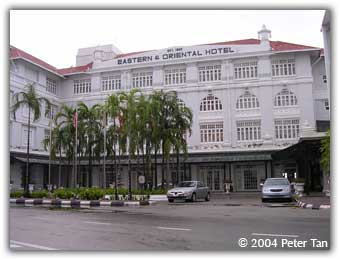 Day 2 – 1438 hrs, Tuesday, June 22
First in our list was the E & O Hotel. We have heard so much about its glittering list of guests. We wanted to soak in the ambience of a long gone era when the hotel was an obligatory stop for those travelling to the Far East. The seafront was a beautiful sight. I told Wuan it has been a long long while since I have sat by the seaside listening to the waves crashing against the rocks and feeling the salty winds brushing against my cheeks.

Day 2 – 1529 hrs, Tuesday, June 22
After coming out of the hotel, we felt hungry again. We had skipped lunch because I overslept after breakfast. We made our way down Light Street, passing the SXI field and Convent Light Street. One of our itineraries was the City Hall and Fort Cornwallis. Seeing the City Hall bounded in scaffolding we skipped it and went looking for food in Little India. 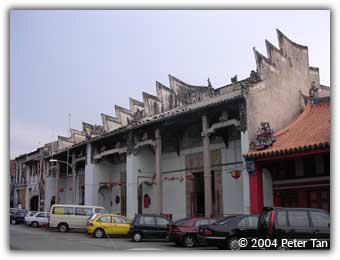 Day 2 – 1531 hrs, Tuesday, June 22
We wandered into King Street looking for kopitiams that served char koay teow or some other Penang hawker food. Unfortunately, most of them closed for business after lunch hours. A row of old Chinese-style buildings that stretched across almost for one block caught our attention. We stopped to take a closer look. It consisted of a temple and some association or clan buildings. 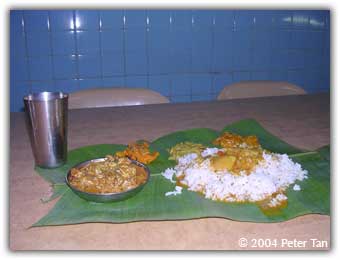 Day 2 – 1603 hrs, Tuesday, June 22
By now, our tummies were rumbling in protest. I thought some of the coffee shops in the banking district of Beach Street could still be opened and directed Wuan in that direction. However, as we were making our way there, right before us at Penang Street was an Indian restaurant that was still teeming with diners. That was a sight for sore eyes indeed. We both ordered two vegetarian banana leaf rice sets. At RM3 per head for all you can eat, it was a real bargain. We also bought some murukus and other sweet delicacies for snacking later. 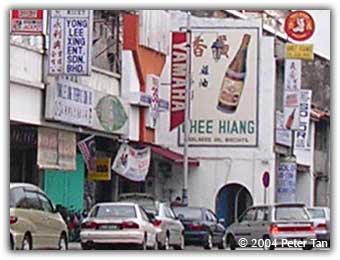 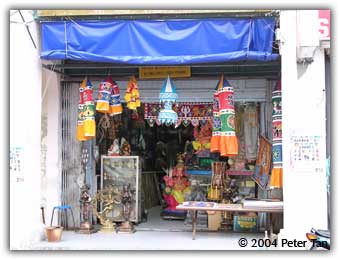 Day 2 – 1659 hrs, Tuesday, June 22
Little India is an enclave of Indian traders selling everything from spices to textile. The sights, smell and colours were fascinating. There were stalls by the road selling teh tarik, an assortment of murukus and vadais. There were shops selling colourful costume jewelleries, dazzling sarees and praying paraphernalias. 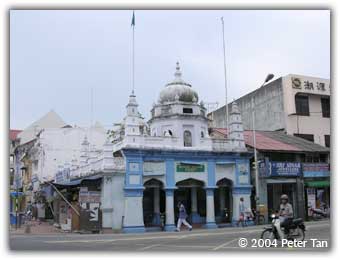 Day 2 – 1719 hrs, Tuesday, June 22
On the corner of Chulia Street and King Street junction, stood a quaint little shrine. The Nagore Durgha Sheriff Shrine’s design had a distinct mix of Hindu and Muslims elements. The two domes on the roof were surrounded by four minarets that looked like pagodas. A songkok maker, a jeweller and a grocery store operated from the side of the shrine. Seeing that there was still light for us to walk around for a while more, we explored the further ends of the inner city. The Lim Clan Temple was opposite the mosque. However it was locked. 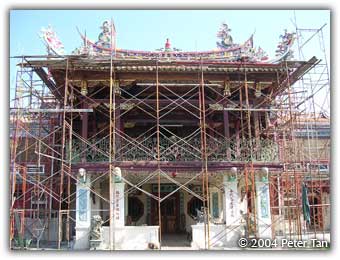 Day 2 – 1737 hrs, Tuesday, June 22
Wuan wanted to go to the Khoo Kongsi. She had read and heard a lot about it and wanted to see for herself the splendour of the temple. We got lost somewhere between Armenian Street and Beach Street and took about ten minutes to get our bearings right again. That was when we came across the Cheah Kongsi’s entrance. The building was under renovation. Wuan went in alone as I did not want to get my wheelchair caught in the debris of restoration works.

Day 2 – 1746 hrs, Tuesday, June 22
We could see a minaret that towered over the houses further up the road. It was the Acheen Street Mosque. The minaret was unique in the sense that it gradually tapered off at the top and its pinnacle did not house a huge dome like most of the mosques we had seen.

Day 2 – 1749 hrs, Tuesday, June 22
We knew that the Khoo Kongsi was near but we could not find it. We thought we were lost again when we chanced upon the entrance. The caretaker told us that it was closed and asked us to return the next morning. It is open from 9am to 5pm daily. Wuan was determined to see the sights inside and we began planning our schedule for the next day. 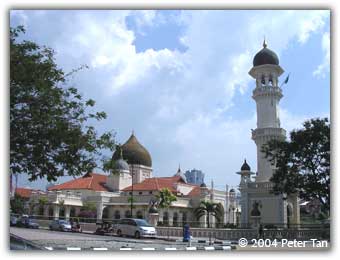 Day 2 – 1751 hrs, Tuesday, June 22
Jalan Masjid Kapitan Keling, formerly Pitt Street, is a hodgepodge of Chinese and Hindu temples, mosque and church, all within walking distance with one another on the same street. The Kapitan Keling Mosque is most prominent with its lofty minaret that was visible from several blocks away. Further down the street was the Yeap Kongsi in Cannon Street with its intricately sculptured pillars. 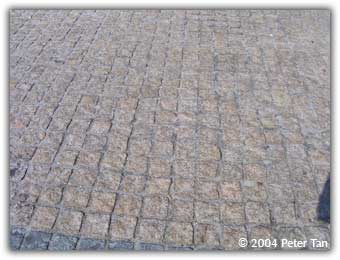 Day 2 – 1759 hrs, Tuesday, June 22
We did not go down the road to go see the temples as the road was paved with uneven blocks. Wuan had a difficult time pushing my wheelchair and it was a very uncomfortable ride for me. I question the wisdom in paving the road in such a way that it not only severely hinders wheelchair movement but motorcycles and other bigger vehicles as well. Getting very annoyed with the bumpiness, we turned into Buckingham Street which was the road beside the mosque for a smoother journey back to the hotel.

Day 2 – 1825 hrs, Tuesday, June 22
Finally we got back to the hotel. It had been a really long day for us. Wuan must be a few hundred times more exhausted than me for pushing me around all day long. I think I have never travelled the distance we travelled today ever. If left alone, I do not think I would have covered half the distance.

Day 2 – 2101 hrs, Tuesday, June 22
We did not feel like eating yet after the banana leaf rice but it was getting late. After getting into our wanderlust attire, we hit the road again to see the night sights of Penang Road again. Leith Street was lined with strings of lighted coloured bulbs, giving it a carnival-like atmosphere. 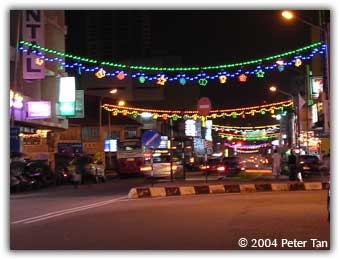 Day 2 – 1924 hrs, Tuesday, June 22
The entire stretch of Penang Road as far as our eyes could see was also lined with colourful lighted bulbs shaped in various motifs like fruits, stars, butterflies and flowers. It was as if Christmas had arrived early. The roadside stalls were filled with night owls looking for supper or having a pint of cool beer by the several pubs that were opened for the evening crowds. Satisfied that we had seen enough, we returned to the hotel. 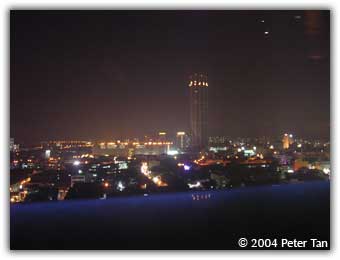 Day 2 – 2212 hrs, Tuesday, June 22
On the uppermost floor of the City Bayview Hotel sits the Revolving Restaurant. It is only opened for dinner buffet. The sight from there was spectacular. We could see the harbour, the rooftops of the inner city and Komtar, the tallest building in Penang as the restaurant slowly rotated. We went to bed early that night, happy that we had covered most of the sights we had set out to see in the first place.