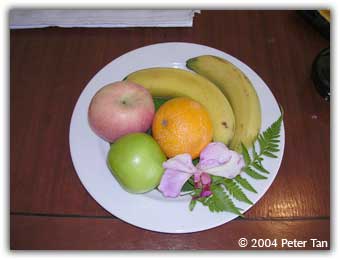 We were awoken by Wuan’s phone ringing. It was her colleague calling to find out about our room booking mix-up. Wuan explained that apart from not having the room that was booked, we had to pay for the room that we were staying in now. She advised us not to pay anything and that we could move to the two-room suite immediately. It was a hassle having to pack and lug our belongings to another room but we were elated when we saw how spacious and luxurious the other room was. The master bedroom had an attached bathroom with a Jacuzzi that looked out to the entire Gurney Drive. We could actually be soaking in the tub and watch people walking by below. How sexy! There was a kitchenette with a washing machine and a microwave oven. In the living room was a sofa bed, a sofa and a dining table. 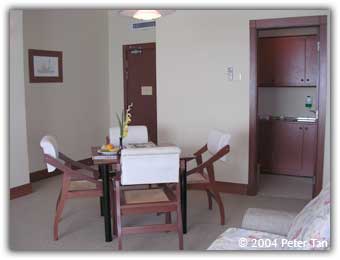 We did not spend much time enjoying our room as our tummies were rumbling in protest. We had a look at the Coffee Bean and Tea Leaf menu. It is located just beside the Gurney Hotel. That was convenient but we did not like what they were serving for breakfast. So on we went to Gurney Plaza again. We had actually planned to have breakfast there anyway. The heat of the morning sun on my skin was a refreshing change. I seldom get to bask in morning sunlight as I tend to wake up late most of the time. 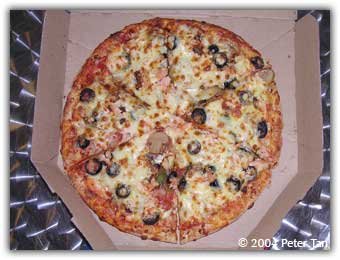 Wuan and I never had Domino’s Pizza before and she had heard that it is better most of the others. We ordered the Value Meal which came with one regular-sized hand-tossed Chicken Classic pizza, breadstix and two cans of Coca Cola. We agreed that the pizza was “different” from the others but we liked the breadstix better. Having had our fill, we went scampering around the shopping complex. As it was still early, the place was rather deserted.

As classy as it may look, Gurney Plaza’s disabled toilets gets a one star rating out of five. One was too small; one without a wash basin and another was under repair. I have never been to a shopping complex with toilets that I cannot use except here. I had no choice but to put my diaper’s absorbency to the test. This is one of the complexes that I will not be frequenting often.

The battery life of my mobile phone was nearing its end. When we passed by a phone shop, Wuan dragged me in and made me choose one as an early birthday present. I liked the Nokia 3120 for its simple functions and nice shape. The shop accepted a trade-in of my old phone for a miserable RM80. We left the shop with a spanking new phone that will hopefully last longer than the two years I had with the previous one. We did not bring the charger for the old phone along. Wuan had to walk back to the hotel to get it as that was part of the trade-in deal. 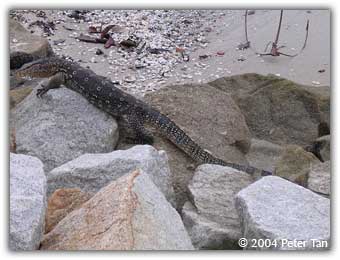 After what felt like hours, Wuan came back with the charger for the shop. She had stopped halfway on the walk back to the hotel to snap some shots of a docked cruise ship that was visible from Gurney Drive. On her way back, she was distracted by a monitor lizard scuttling by the rocks. It had probably swam along the coast looking for food. 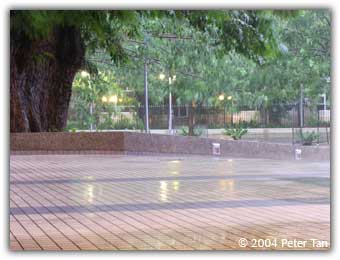 We had dinner at the basement food court where we shared a bowl of Taiwanese-style rice with salted vegetable, minced chicken and lotus root soup. I did not have a good appetite then as I was still coughing. We had wanted to go back after the dinner but were hampered by heavy rain. Unable to go back and too lazy for another round of window shopping again, we waited for the rain to stop while sharing a glass of hot chocolate. When the rain finally stopped, we quickly made our way back. They sky was still dark and threatened to pour again soon.

When we thought we could get a good rest upon arriving back at the room, one of the lamps blew a bulb and we had to wait for one hour before the technician came replace the bulb. In the darkness, we watched the replay of the Copa America finals between Brazil and Argentina while eating the leftover pizza from breakfast. That was not my idea of a relaxing holiday, eating scrap in the darkness. We had intended to have a nice dinner in a romantic setting but we too pooped out. We did not sleep well again that night with my persistent coughing every few hours.