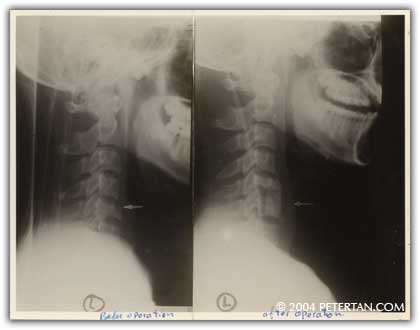 X-ray of my spine before and after surgery.
Image courtesy of Mr. Kazem Djavadkhani, Neurosurgeon.
There is no weather-beaten host to egg participants on. There are no scripts to follow. Life is played out as it is. The tears are real, the pain and suffering are too. Losers do not get booted out. They just do not make it out alive. Those that are left behind are left to savour their victory for a while longer. Welcome to Survivor SCI – More Than A Reality TV Show. It is here, it is real and I live it everyday.

The rules are simple. All that is needed to participate is to break a vertebra or two, or suffer from spinal stenosis. I qualified by virtue of fracturing my fifth (C5) and sixth (C6) cervical vertebra. The game begins the moment paralysis sets in. After that, the only objective is to last as long as possible. There is nobody to outplay except oneself, and no one to outwit except one’s own fickle mind. There will be no clear winner and no US$1,000,000 waiting to be taken home. Like everybody else, all participants will eventually succumb in the end anyway.

The odds have already been mapped out. The higher the level of damage to the spinal cord, the higher the probability of having to retire earlier. In the USA, the life expectancy is 42 years post injury for a person suffering damage at the fifth and sixth cervical vertebra at age 20. Malaysia’s life expectancy at birth is 71 years for the male population. My odds do not look that good as compared to the average Malaysian male lifespan.

After becoming an unwitting inductee into this game, I associated my odds with that of the first tetraplegic I met in the hospital. He survived only twelve years, just a couple of years after we got acquainted. Twelve years seemed like it was very far away then. I did not give it much thought because my condition was still uncertain. I thought I would be walking again soon.

Even before I hit the first decade, I was beginning to suffer a reflux of urine back to the kidneys, causing them to be swollen. That led me to consult Mr. Liong, the urologist at the Lam Wah Ee Hospital, in the early nineties. I have been performing the unpleasant task of catheterising myself since.

Dad passed away exactly one month after my first decade as a tetraplegic. Death was no longer something new to me by then. It had clung on to me like a wet shirt since I was determined that my expiration would soon follow. Still, the thought of leaving Mum to fend for herself alone was something I could not allow myself to do. I was all she had and the thought of her grieving for me was unimaginable, seeing how she grief-stricken she was at Dad’s funeral.

Nevertheless, as the twelve-year mark drew nearer, I wondered how I was going to die. I was not at the brink of death when that ominous day arrived. With that portentous barrier shattered, a sense of great relief settled upon me. Still feeling very much alive, I celebrated that milestone in silent reflection. I looked back at what I had accomplished the past twelve years and thought I had done well considering my disabilities.

From being totally paralysed and totally helpless to running a small photocopying business and earning my own keep was something I had never thought I could pull off. There were obstacles but Mum supported me all the way. She was unequivocally the motivating force behind that unlikely feat. She helped in every way she could. Even if she did not know how, she would devise a way. Such was the love of a mother.

After leaping over that twelve-year point with ease, I set my sights on the next target – the big two zero. I have not foreseen surviving this long but, yes, I have survived twenty years today. This achievement came with a price. I lost Mum and I lost almost half the function of my kidneys. Even with intermittent catheterisation, my kidneys’ condition has continued to deteriorate, albeit rather slowly. I am now down to 60% renal function only.

There were some great moments too along this twenty-year journey. I found the woman that I want to spend the rest of my life with and I discovered the love of Jesus Christ, in that chronological order. These are the two unfolding events that have made my life more fulfilling than it would have been. These are rewards more valuable than winning immunity challenges. They are so priceless that it is virtually impossible to describe the amount of contentment that they have given me.

These twenty years, I have gone through the extremes of human sufferings and joys. It has been a breathless roller coaster ride of ups and downs. From the deepest of depressions to the highest of exhilarations, I have gone through them. I have lived a life many would have to go through many lifetimes to experience. Sometimes, I outwit myself and sometimes I get outwitted by the ostensibly hopelessness of the situations. At times, I felt like giving it all up while other times I just wanted more of the good things that were coming my way.

“The statistics say that I have another twenty two years,” I told Wuan a few days ago.

“So little only?” she half asked, half sounded disappointed.

“We have used up five years. Let us make the best out of the remaining twenty two. Twenty two years is a long time if we count it by the day.”

In truth, those are just figures of the average. I may survive that long, even longer or much less. It all boils down to the state of my kidneys and how much longer God wants me to be around. I am grateful for these twenty years, for still being alive. I have learnt many valuable lessons. I have learnt that a mother’s love knows no bounds. I have made many genuine friends. I have seen the evil in men. I have seen the kindness that came sincerely from the heart.

Look Mum, I have made twenty years! Thank you for giving me hope when there was none left to cling on to. Thank you for giving me life twice, first when you brought me into this world and again when I thought the battle was all lost. You stood by me no matter what. My surviving twenty years is testimony of your undying love, gentle care and the immense sacrifices that you have to make to put me where I am today. Thank you Mum. Another twenty years? Only time will tell. But why not? I can see her smiling now. What she did for me was not in vain after all. Although the odds of staying on is getting thinner by the day, I am still in the running in Survivor SCI. That is what matters most.

* Letters from friends when I was in the hospital have been added to the Gallery.