This entry is one week late. I have been trying to blog in chronological order. I was totally exhausted after those few days in Gurney Drive and one full day visiting the tsunami hit areas of Pulau Betong and Teluk Kumbar. I tire easily and I am not getting as much rest as my body is screaming out for. I need to post those images before I leave for Kuala Lumpur. Wuan does not have broadband. It is a pain to upload a whole album of photos via dialup.

1306: There was nothing sweeter than home but we will not be able to enjoy the comforts yet. We came back just to drop off our luggage. Despite our cousin assuring us that she and her family were safe and well, Peter and I wanted to go see for ourselves that they indeed were. 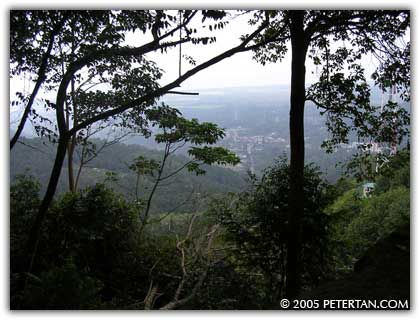 1434: Peter stopped at the rest stop at the peak of Jalan Tun Sardon on the way to Balik Pulau. Wuan have not seen the panorama of Balik Pulau and Genting from there. It was hazy and the view was not exceptional. This unclear air had pervaded since the time we were at Gurney Drive. The blatant opening burning made it worse. 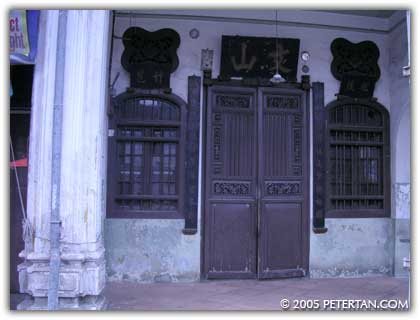 1449: We stopped at Balik Pulau town for lunch. Peter parked his car right in front of this house which still retained its antique door and facade. This is one of the few houses left in this town that is not renovated and converted into a business premise. 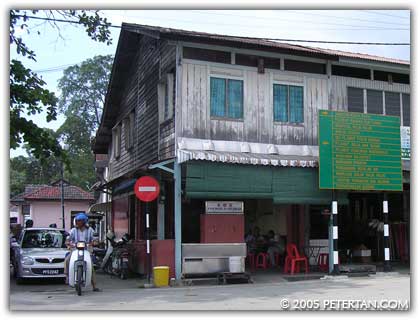 1451: Wuan had been hankering for her favourite laksa here for a long time. Unfortunately the stall was closed. She likes the Siam laksa cooked by the swanky aunty managing this stall. On the other hand, I abhor the place because it is usually swarmed with the biggest flies I have ever seen. I believe this laksa stall is popular with tourists because of all the publicity it has been getting in the press. 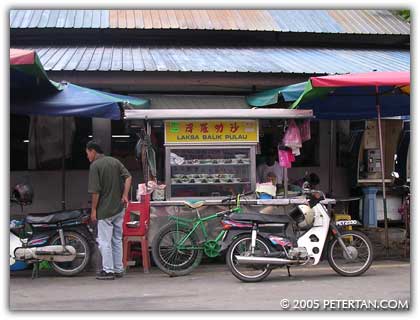 1510: We had asam laksa instead. This stall has been selling laksa here for as long as I can remember; and that is a very long time. Although I have to stop eating laksa now because of the fish (I am cutting down on eating sardines) and shrimp paste, I still will indulge in it once in a very long while. I like mine sour; Wuan like hers lemak. 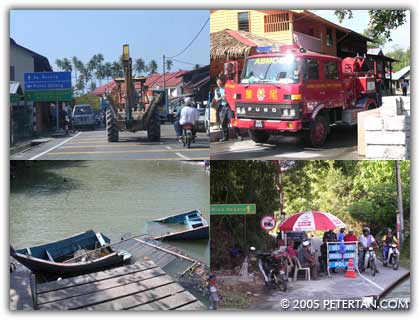 1542: When we reached the Pulau Betong village, vehicles from the Civil Defence, a fire engine from the Paya Terubong Volunteer Fire Fighting Squad and two garbage trucks from the MPPP were parked there. The MPPP crew were busy loading the discarded furniture, mattresses and other objects damaged by the tidal waves into the truck. I waited in the car while Wuan went to take some photos. We then went to our cousin’s house which was quite far behind and was not affected at all. 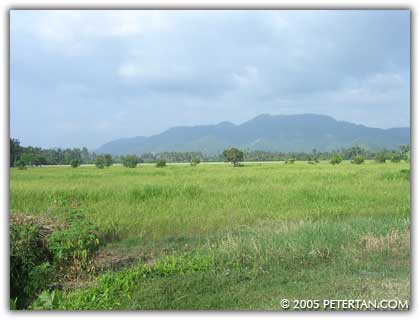 1631: After leaving out cousin’s house, Peter drove us around the area for us to take in the idyllic vistas of stilted kampong houses, coconut palms and the leisurely pace of kampong life. This is the type of life I would like to live – the infrequent noise of traffic, the sweet melodies of nature, greenery all around and to be able to breathe unpolluted air. These kampong folks have it all. 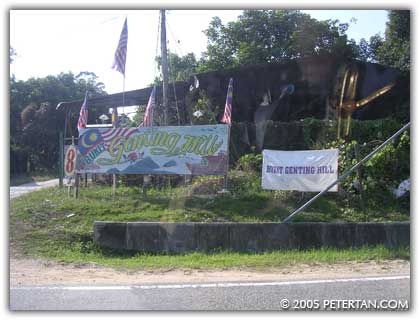 1642: On our way back, Peter decided to make a detour and took us up to Bukit Genting. The view up there was still as scenic as when I first saw it except for the haze. Wuan had a merry time shooting the flowers and anything else that caught her attention. We had an early dinner there. I am not partial to Thai food and those that we ordered did not tantalize my taste buds one bit. 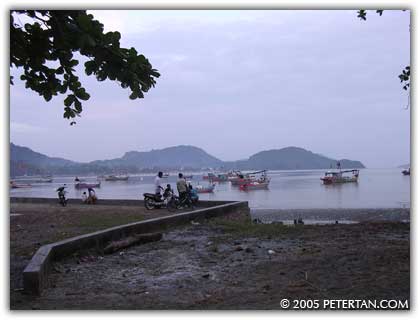 1856: We made one last stop at Teluk Kumbar to check on a relative of Peter’s wife. Apart from the pile of silt-laden belongings at the garbage dump, there were little suggestions that this place was inundated by the tsunami as well. We were told that truckloads of refuse had been carted off by the MPPP and the area thoroughly cleaned up and fogged.

2003: We reached home, tired but contented that Penang is alive and bustling again. At the same time, we silently mourned for the loss of life here and elsewhere and prayed that those that survived the onslaught of the tsunami will receive aid soon. We were only bystanders to this cataclysmic tragedy and can never fully grasp the grief of those who lost loved ones and all they ever owned. Humans are very adaptable creatures. We shall rise up again from the ruins and build a better world. This is evident by the outpouring of donations of cash and kind from all over the world. We shall persist. We shall overcome. We always had. We certainly can now.

* More photos are in the Gallery.