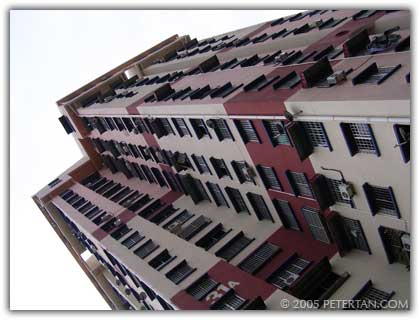 Someone asked me why I got an apartment on the twentieth floor when I am on a wheelchair. It would have been easier to be evacuated had I stayed closer to ground. Being severely paralysed, I will always need assistance. When Peter and I decided to get our own abode, we chose to stay close together so that he could help me should the need arise. The only units left were on the high floors. That is the why to it.

That is beside the point anyway. People living in high floors do get old. People staying on the twentieth floor do get into accidents and become disabled. I am not the only person in the four apartment blocks here using a wheelchair. There are aged residents here who have problems with mobility too.

With two temblors occurring back to back in recent months, there is an urgent need to have proper contingency plans to evacuate people living in high rise buildings. We all breathed a sigh of relief when cursory inspection did not indicate that the structural integrity of these buildings was compromised. Nevertheless, how certain are we that the next earthquake may not bring some of these skyscrapers down?

High rise fire is a real danger too. Several have occurred here. What infuriates me most is that fire engines were not provided with quick and easy access into premises. Cars and motorcycles were allowed to be parked in such ways that they obstructed the free movement of these heavy vehicles. The access to the pump house is obstructed by a motorcycle shed that was built without approval by the MPPP.

It is difficult to comprehend why such important aspects of safety are overlooked and ignored while large sums of our sinking fund money were invested in unit trusts without our knowledge. I do not want to speculate whether this is legal or they have the right to utilise the sinking fund for such purposes. Police reports have been made. The Pengarah Tanah dan Galian has been notified. No action has been taken by either.

It is truly disgusting to see the building manager disregarding pertinent issues like these while at the same time do things that are only beneficial to themselves. They treat the premises here as if it is their fiefdom. They reserve car parks in the common area for themselves. They construct structures without the approval from the relevant authorities. They utilise large amounts of common funds without seeking the approval from apartment owners. It makes one wonder who the building manager is serving. In the meantime, all we can do now is to pray that nothing unpleasant will happen here that needs evacuation.

Mack Zulkifli, after listening to my plight, has taken up the cause. Today he posted Malaysia, do we care enough? in his blog to highlight my problems in getting the building manager to draw up an evacuation plan. He has made a banner to support this effort in getting the people concerned to draw up an proper evacuation plan for the disabled. It is heart-warming to know that I am not alone in this fight. This fight is not for me alone. It will benefit a lot of other high-rise dwellers who are in need of assisted-evacuation. Do we need to read news about people like me dying before someone in position of authority decides to do something?

16 thoughts on “The Fiefdom of Taman Pekaka”