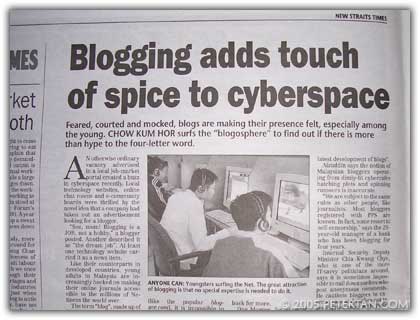 Read Aizuddin Danian’s entry titled Blogs in the NST about his interview and discovered that the issue regarding my wheelchair was highlighted. That article touched on Project Petaling Street and mentioned the name of filmmaker Yasmin Ahmad and three more well-known socio-political bloggers – Aisheman, TV Smith and Mack Zulkifli.

Oddly, or expectedly, Jeff Ooi’s name was left out entirely. He was not even credited for being the person instrumental in prompting fellow bloggers to write to Malaysia Airlines regarding the mishandling of the wheelchair and the shoddy treatment at the Lost and Found Office. The following is the one paragraph mention of my case:

Nevertheless, Jeff being awarded the Freedom Blogs for Asia is testimony of his influence. He has taken up the task of informing the interested public on pertinent socio-political issues where the mainstream media fails or refuses to report. He takes the lonely path where others fear to tread. This is a man of courage. This is the man who invokes respect, whether one agrees with his views or not. This is one man we need more of.

Here I would personally like to thank Kimberly Low, Ashok Kandiah, Lucia Lai and all who have sent letters or emails or made calls to Malaysia Airlines, and of course to Jeff Ooi again who made all these happened. I believe that had expedited the process. This is the collective power of blogs at work. This is how we should all use our blogs – contributing to the betterment of our fellow humans.

11 thoughts on “NST on Blogging”