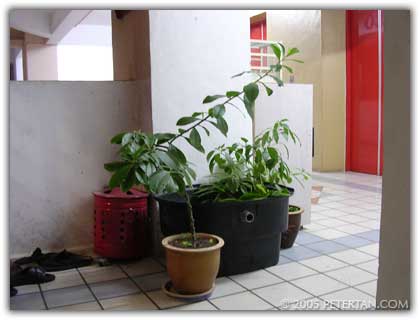 You must love your neighbour as yourself. (Matthew 22:39, NJB)

This commandment, while seemingly simple, is one that is extremely difficult to obey when one has a neighbour like mine. After an uneventful journey back from Kuala Lumpur, I got home to discover my neighbour had used one of a pair of Mum’s glazed flower pots to plant chillies. There were other normal clay pots there but he had to use the nicest.

When I saw his father, I told him he could use my other pots but not that particular one. He was very amicable and said he will get the plants transferred soon. His daughter, the owner of the apartment, came out and started to be abusive, accusing me of being a calculative neighbour. She said they have just planted the chillies and have used my pot because I was not around and the pot was empty.

While she was screaming outside, I turned my back to her and continued surfing. A short while later, still screaming, she dumped the glazed pot outside my door and said she does not want to use the other pot too. I turned back to look at her briefly and continued to surf, ignoring her and the two pots she left outside. That must have annoyed her more as I could hear her hurling more insults outside in between talking loudly to her brother.

As if that was not enough, she dragged a water tank that had been used as a planter from another part of the common corridor and positioned it just outside our entrances. My guess is that she had hoped to inconvenience me when I needed to go out. That did not work. I could manoeuvre my wheelchair with little difficulty to get out.

I could never imagine how petty some people can get. They dragged another pot to create a wider obstruction when it was obvious that their tactic was not working. I have not gone out yet. Tomorrow perhaps. I have been very patient until now because I do not want to create an air of enmity with people I have to meet everyday. However, if my safety is compromised because of those obstructions, I definitely will take action through the proper channels against these people. In the meantime, I pray that they will see the error of their ways and remove the obstructions which are also inconveniencing themselves.

All this over a flower pot. Unimaginable. I am glad there is a set of mores to guide me during times like these. Religion really does change a person for the better. I normally would have screamed back. I did not this time, not since I accepted Jesus into my life. Thank God for that.

53 thoughts on “Love Thy Neighbour”