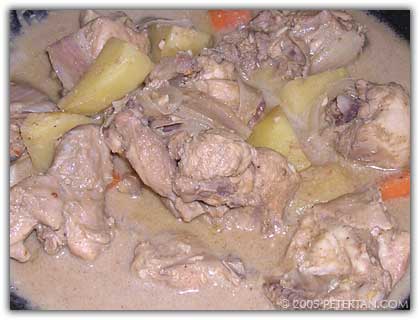 There was a time when the mutton kurma from Dawood Restaurant at Queen Street never failed to make me salivate. Somewhere along the way, it began to taste different and I have stopped yearning for it. Through the years, I have tried this dish from other Indian Muslim restaurants but it just did not have that X-factor to make me go back for more. I have tried cooking it. Still, it was never the same.

Nowadays, most spice pastes used for cooking are premixed. I remember being a small kid following my mother to the Air Itam wet market where an Indian lady would be selling an array of spice pastes. Those came direct from her batu giling, a flat surfaced granite grinding stone with a granite pin. The aromas of those pastes were heavenly. One only needed to tell her what type of curry and how much meat and she would mix the paste and wrap it in a sheet of banana leaf.

Two days ago, while shopping at the newly renovated Sunshine Square Supermarket, Wuan and I came across this stall selling spice paste. We knew for sure the paste did not come from a batu giling but his kurma paste looked good. We asked the young Malay man how much was needed for half a chicken and he recommended 150g. We also bought RM1 worth of coconut milk. I have to forgo cooking mutton kurma because red meat is no longer something I can indulge in anymore.

Wuan could not get chicken at the market yesterday. We decided to cook it today. When we took out the frozen coconut milk out from the fridge, I discovered that it had gone bad. Since Makro is just next to my apartment, Wuan went to get a packet of vacuum packed santan from there. Most kurma recipes call for plain yoghurt and ghee to be used. I have substituted those with coconut milk and cooking oil. Additionally, red or green chillies can also be used to add more colour to the dish.

The kurma tasted nice but as this is the first time I am cooking with this paste, it does not taste as good as it should. My food now has to contain very little salt. I have taken the liberty to adjust the recipe and the amount of ingredients used to suit those who do not need to cut down on their salt intake and prefer more flavour in their kurma. I hope you will enjoy it as much as I did.

Heat oil in wok. Fry garlic and onions until fragrant. Add kurma paste and fry until fragrant. Add chicken and stir until they are coated in the paste. Add water, salt, potatoes and carrots. Cover the wok and let simmer until chicken is cooked and the potatoes are soft. Make sure there is enough gravy to prevent the ingredients from sticking to the bottom of the wok. If gravy dries up, add some coconut milk. When almost ready, add coconut milk, stir and let it simmer for another 3 minutes. Serve with rice.