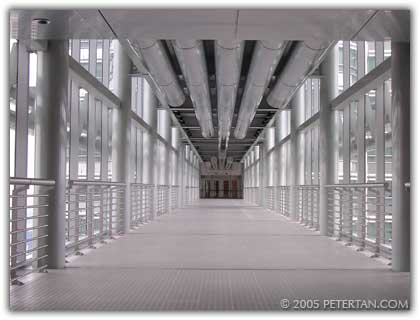 The many times that I have been to Kuala Lumpur, there were five things that I had always wanted to do. One of them is going up to the Petronas Twin Towers skybridge. In between conversations with SK at the Mid Valley Bloggers Meet, Wuan had told SK that we had wanted to make that visit but the tickets were all given out for that particular day. Incidentally, SK?s office is located in one of the towers and he offered to get the tickets for us. 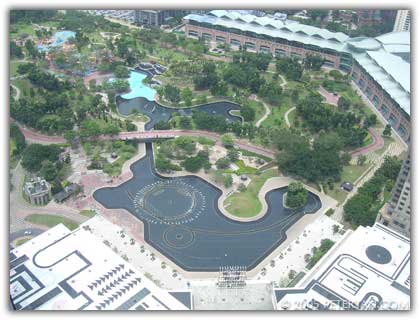 On the morning of June 22, SK got his colleague to get five tickets ? one for himself, Wuan, William, Cynthia and me. However, each person is only entitled to collect one ticket only. Hence, his colleague roped in another four to stand in line for the tickets. Thank you guys. Much appreciated. However, SK later discovered that all he needed to do was to get his office administrator to book the tickets for us. 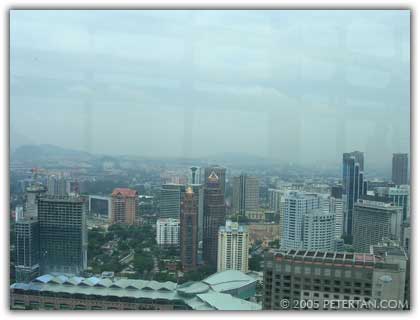 The elevator ride up to Level 41 was one of the smoothest I have ever experienced. There were no sudden jerks or creaks along the way. In fact, I did not even feel it moving. The skybridge consists of two decks connecting both towers at Level 41 and 42. It was a little hazy that day and rather cloudy too. Despite the Golden Triangle?s innumerable skyscrapers, there are still large areas with low-rise buildings. 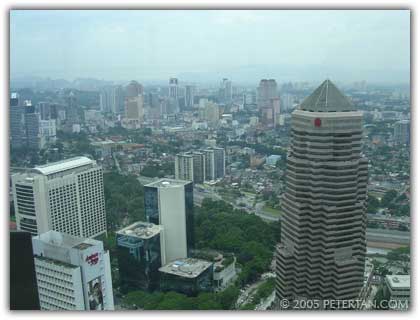 I wished I had taken more photos but I did not. Wuan took many more. Perhaps I was too awed by the panorama. Besides, I did not have a good angle to shoot from. The railings on both side of the skybridge blocked a good part of my view. We were allowed only about ten minutes up there because of the many groups that were still waiting for their turn. Each group was allocated a time slot and given tags with different coloured lanyard for identification. 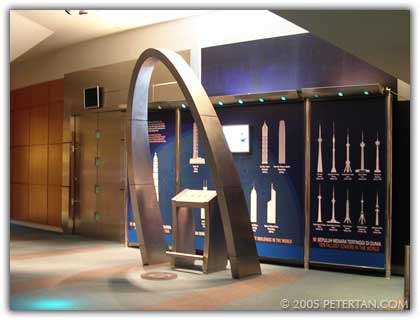 Visitors were allowed to linger at the lounge after that. The lounge consists of several display areas complete with documentaries on the construction and other technical aspects of the Petronas Twin Towers. There is a gift shop with all sorts of Petronas Twin Towers souvenirs. Wuan and I bought four postcards with views of the towers. We had an informative and entertaining afternoon there. Thanks SK.