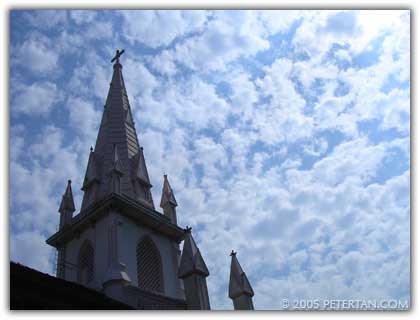 It is just another date, I kept telling myself. In my mind, it is not. I am becoming more restless as the day nears. Anxiety, despair and hopelessness all are beginning to descend on me like an inescapable storm. It is dark, it is intimidating and I am scared. Suddenly, I feel so lonely here in Penang.

There are these throbbing aches – in my heart, in my abdomen, everywhere. I sat still and closed my eyes hoping that they would go away. They ached even more. Two years on, images of those last days are still running in an unending loop in my head. I knew it would not be easy but I did not know it was this difficult.

Each time I wheeled across the long corridors the pungent odours of antiseptic, medicine and death assailed my nostrils. Those were the least of my worries. Those times, there were only two thoughts that swirled in my head as I got nearer to the room. Fear and hope, two opponents from extreme ends yet were so intermingled in me that I was confused beyond comprehension.

The inherent fear was to enter the room to see an empty bed. It was not something I was hoping for but was prepared to reluctantly accept. Seeing that familiar face was a great relief but that morning, two years ago, it was different. The cheerful cherubic mien after the blood transfusion was no longer there. In place was a face that showed resignation.

“Take me home. I want to go home. If I die I want to die at home.” Those were the only words she kept repeating in her soft weepy voice. Although I had expected the worst, those depressing words were completely unexpected. Her dying did cross my mind only to be hushed away most times by my optimist side. She was a fighter. I had expected her to live on for many years still. And there that morning her voice was one of utter defeat.

Were those months that I had looked after her in vain? Did I not do enough? If there was one thing that I did not do enough of, it was not praying for her to all the Gods I that knew. Was Buddha listening? Was the Goddess of Mercy listening? If I had not prayed hard and sincere enough, I was willing to do it again and even more fervently. I felt so forsaken, abandoned. Those sporadic times when I was young and innocently kneeled in prayer with jossticks for the health of my parents were absolutely in vain. Had they listened? At that very moment, the burden of many months felt even heavier. Strength just gushed out from my every muscle. I felt drained, totally. There was nothing more fearful than losing the person who had been my source of strength when I needed it most time and again.

I would have given anything for her to be well again. No sacrifice would be too great for the woman who had selflessly given me thirty seven years if her life. My heart was heavy. I looked at her. There was only pain in her expression. This chubby woman I had known all my life had been reduced to skin and bones. Her once lush grey hair was sparse, clearly revealing her scalp. For the first time, I looked at her for the longest instance that morning. I had hoped to remember every crease, every wrinkle, every feature that made the sight of her so soothing in my mind lest I never get that opportunity again.

“If you die, who is going to look after me? Who is going to care for me? Who is going to love me?” I had hoped those words would spur her on. That was the second time I had tried to psych her up this way. It was effective the first time. Obviously it did not work anymore. She was too weak to fight on. Defeat was written all over her face. I felt defeated too. I had thought that by triumphing over my disabilities nothing else could crush my spirits. Evidently this was one that did it very convincingly. I was a thoroughly broken man that morning. I was heartbroken. My spirits were absolutely crushed.

“I cannot help it if I have to go,” was her feeble reply.

That was all she had in her mind – going home to die. Should I? All her life, she only knew how to give selflessly. Never once had she asked anything from me. Take her home I will, to recover. I will fulfil her wish to go home only. I will not let her die but she knew better. She knew her time was almost up.

27 thoughts on “Beginning Of The End”