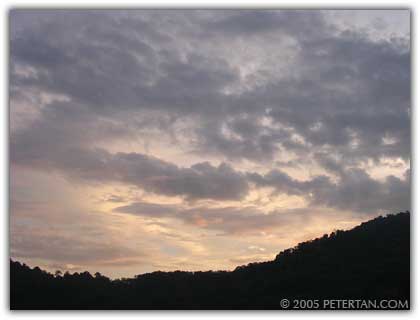 After months of uncertainty, things were beginning to look encouraging. They say bad things come in threes. That was the third time she was hospitalised. I was very sure she was going to pull through that third hurdle and come out stronger and healthier. All that was needed was for her to get a lot of rest and nutritious food. After those weeks of looking after her, I was sure cooking nutritious food to feed her back to the pink of health was not an impossible task anymore.

That afternoon, she looked cheerful, although still weak from the hypothermia ordeal a few days earlier. The two units of blood transfusion had turned her pallor cheeks to a ruddy pink. She had just begun to wear diapers a few days ago. Wuan had been cleaning her and changing her diapers since. In the weak condition that she was in, it was more convenient to use diapers. Within that short span of time, Wuan had worked those into a very efficient routine. I was glad for that extra help.

As usual, I brought her a flask of soup that I had cooked overnight in the crock pot. It was still piping hot. She took small sips. Even her appetite was getting better. Those were good signs. She could not sit up for long periods at a time. After Wuan had tucked her comfortably in the bed again, she was quiet for a while. I observed her from the edge of the bed. Indeed, she had not looked as good as that since she became ill. I nodded in gladness and consoled myself that all would be well again.

The more I gazed at her, the more I felt something just did not seem right. Her eyes were red and wet. She was sniffling. She took a face towel and covered her eyes. I tried to figure out what was affecting her to such an extent.

“Why? Are you feeling ill?”

“Where are you feeling unwell?”

She sniffled even harder. I turned to look at Wuan. We were surprised at that sudden change of emotion in her. I was alarmed and did not know what else to do or say. I continued to observe her. A sense of hopelessness began to dawn on me. Those brief moments felt like it was forever. When I could not bear the thought of not knowing what was bothering her, I asked again, “Tell me where you are feeling unwell.”

She removed the towel and pointed to Wuan. “She is going back,” she said in between sobs.

Wuan and I looked at each other again. I signalled her to get closer. Wuan understood. She leaned over the cot side and gently said, “I will be coming back again next month.”

She continued to sob.

“When I come back,” Wuan continued, “I want to see you looking after the plants that I just planted outside the apartment.”

Her sniffling subsided. She wiped her eyes but avoided looking at us. I began to get worried. She was never like that before.

“When you are well, come stay at my place again,” Wuan added.

She was a strong woman. It took a lot to make her weep like she did. All through her illness, she never had once complained or whined about it except that time when she suffered hypothermia and cried out for me again and again. Fortunately Wuan was there to console her. I just sat beside her and kept crying then because I thought she was really going to die. She took all the discomforts during her illness good naturedly. Never once did she make me do more than I could manage when I was looking after her. I knew that she had tried hard to not to trouble me. She did not. On the contrary, it was I who had troubled her all my life. What was a few weeks of looking after her compared to all that she had given me?

I have never seen her in a sadder disposition than that afternoon. She was a simple woman with simple needs. She was seldom in want of things. She had always been cheerful and optimistic in spite of the many adversities that she encountered. I had wondered why she had felt such unhappiness knowing that Wuan could not stay in Penang more than one week each time that she visited. Perhaps she knew something that we did not. Perhaps she already had the realisation that those would be the last few times that she would ever see Wuan again.

6 thoughts on “Tears Of Premonition?”