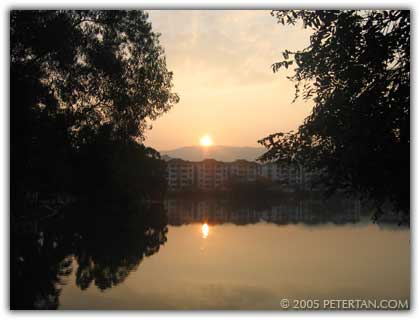 Waiting for the unknown saps courage from even the bravest. There was no fitting consolation to that. A confused mind only exacerbated the situation. Unpromising as it may seem, there was always this glimmer of hope that it could turn around. Hope – that was all I had. My incessant impiety had me cast out from the mercy of the divine. I was indeed on my own, discarded to the abyss of the damned, my impassioned pleas lost in the void of darkness.

The clock ticked away. Each sixty seconds felt like an eternity. I wished it was eternity. If only time could stand still, I thought, I could keep her here forever. What profit would it be to keep the body when the soul was already one step into the other side? In moments of desperation, thoughts defied logic. A vacillation between compassion and selfishness churned wildly inside me.

Time did not stop. It trudged on ceaselessly, determined to mark off the fragility of life morsel by morsel. Waited for the inescapable I did. At the same time I surreptitiously hoped it never would arrive to collect the spoils. Even if it was adamant, would there be a reprieve? A promise was made and needed to be fulfilled. One more day was all I had begged for. Let her ears be graced by that sweet voice she was longing to hear for one last time before she is taken away forever. One more day, please…

4 thoughts on “One More Day”