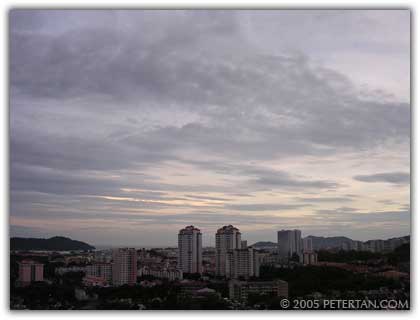 Out there somewhere, some people will never live to see another sunrise again. At the same time, some are counting down to their last sunset. Those are one of the most agonizing times anyone can ever go through for those that are terminally ill and their family as well. Like Paul, I could never have imagined how depressing it was to see a loved one slowly wasting away until I had to look after Mum.

She suffered chronic lymphocytic leukaemia, an incurable blood disorder where her body produced large quantities of malformed white blood cells. During her last two months, she was in much pain when the cancer cells began to invade her bones too. When I saw her writhing in pain, I wished I could ease some of that by suffering it on her behalf. Painkillers were not totally effective. The ache began to set in long before the next dose was due. The sense of hopelessness was simply distressing.

Fortunately, Mum had the privilege to be enrolled under the Penang Hospice-At-Home-Programme. Karen, the nurse charged with Mum’s case, would drop in to check on her several times a week. It was a great relief to know that should I need nursing and medical advice, I could always check with her. The most important aspect of this was that Mum was accorded the dignity to live out the remaining days of her life in the comfort of home while getting the essential care that she needed. I was truly grateful I had this kind of support in looking after Mum. It would have been very difficult had I had to go through it alone.

When Suanie asked for my suggestion on the charity to support for Blogathon 2005, the first and only organisation that came to mind was the Hospice-At-Home-Programme. No act can be nobler than easing the final journey of the terminally ill cancer patient like what this group of people are doing. After all that I went through with Mum, I wholeheartedly embrace and support this concept of caring. I hope all of you who are reading this will feel the same way. This organisation functions mostly on donations from the public. They need your support to continue with what they are doing effectively. Please pledge and donate generously so that someone somewhere waiting for his last sunset will have an easier passage to his final destination.

2 thoughts on “Easing The Journey Into The Last Sunset”