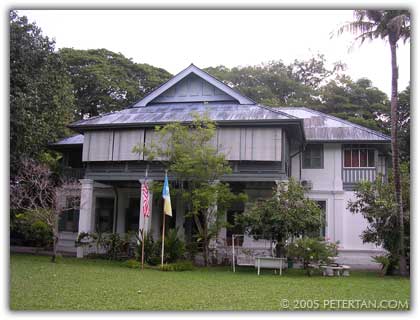 Relay For Life 2006 will be launched on November 19, 2006 at 4:00pm. The official launching will be done by YB Dato’ Dr Toh Kin Woon and it will be held in Rumah Hospis. Cancer awareness, prevention, early detection and palliative care is one cause that is close to my heart, having lost Mum to leukeamia. I have so often heard from friends who have loved ones or friends suffering from cancer, some succumbing to it.

We can help them fight this by giving them the support they need, whether by donating to causes that help them, or giving our time and effort in assisting organisations that are helping them. Helping the Penang Hospice provide them palliative care is one of the things we can do. We can also show our support by participating in the Relay For Life. This is one event that is now being celebrated worldwide to promote cancer awareness, among others. The following is the blurb from the National Cancer Society of Malaysia, Penang Branch:

Relay For Life arose in 1985 hen a volunteer of the American Cancer Society (ACS), Dr. Gordon Klatt, decided to jog around a “padang” in Tacoma, Washington soon after a friend of his died of cancer. As he ran others joined him, donations were made at the end of the twenty-four hours. Donations to the ACS amounted to USD27,000. This was then adopted by the ACS as a programme to increase awareness of cancer and its control,to celebrate survivors, remember those who had died and to raise funds or the fight against cancer including the research.

Malaysia was the 18th country in the world to join in the American Cancer Society’s signature event when the National Cancer Society of Malaysia, Penang Branch was awarded the license to run Relay For Life. Relay For Life – Fighting Cancer Together was held for the first time in the country at Taman Perbandaran Pulau Pinang in March 2005. Hundreds of people came forward to walk or run through the night in solidarity with those having cancer, to honour the many survivors and remember those who had lost their lives.

Leading to the success of the first event in 2005 the Society will continue to step up efforts to increase public knowledge of cancer – its causes, stepping up prevention or early detection, proper treatment and support care for all cancer patients.

Through this campaign we also hope to reduce the stigma associated with cancer. It will also be an opportunity to highlight the fact that there are many survivors of cancer in the country, which in turn will have a positive impact on the current wholly negative perception of cancer.

From 19 November 2005, we will recruit teams of ten volunteers who will provide information to the public – family and friends, their neighbourhood or the workplace using flyers and brochures about cancer control. At the same time they will solicit funds for the Society to fight cancer. Other approaches will be by holding talks, exhibitions, a series of articles in the press and spots on radio and TV.

Taking on Relay For Life is a huge undertaking for our Society. We look forward to our members, volunteers, supporters and staff to rise to this challenge. Working together we can help reduce the burden of cancer.

The relay event itself will be from 11 – 12 March 2006 at the Taman Perbandaran Pulau Pinang which is being kindly sponsored by the MPPP. This will be a celebration – with team members walking or running around a “padang” over these two days, a walk by survivors of cancer and a remembrance of all those who fought cancer but in vain as the highlights. It will be a family fun event with music, singing, dances, games and, of course food.