After two weeks of struggling with housework, I finally broke something. I have been shifting uneasily in my seat for the past few days. That definitely was not a good sign but I did not think too much about that until today. Something did indeed break – the skin on my left buttocks. I ran my fingers around the source of the pain and could feel the edges of a small open sore. 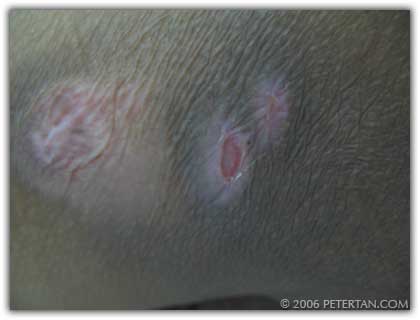 The two smaller pressure sores on my left buttock
developed my while I was in Tokyo. The large scar
on the left is from a sore that has healed.
File photo dated February 5, 2006

While performing chores, I had to constantly shift my posture, causing abrasion against the skin. The skin around my posterior had suffered pressure sores several times, most recent was when I was in Tokyo and again in Bangkok. Evidently I am unable to sit long hours at one stretch. If the pressure against the sore is not relieved, it will get larger.

Lately I do not have the luxury to fully rest in between chores. Pressure sores like this take a long time to heal if not properly taken care of. My first pressure sore took almost one year to heal. It cost a few thousand Ringgit in medicine and treatment. That was when I was hospitalised after my accident. It was ironic that I developed a pressure sore in the hospital while on the Stryker Frame. The frame allowed me to be turned every four hours to relieve the pressure points, namely the heels, buttocks, sacral region and scapula.

Different people with spinal cord injury have different treatment for pressure sores. As for me, a lot of rest in bed coupled with constant application of Povidone Iodine does the job. With proper care, it could dry up and heal within two weeks. When I was in Kuala Lumpur, Wuan took care of that each time the skin opened up. Now that I am back in Penang and living alone, I will have problems applying the solution.