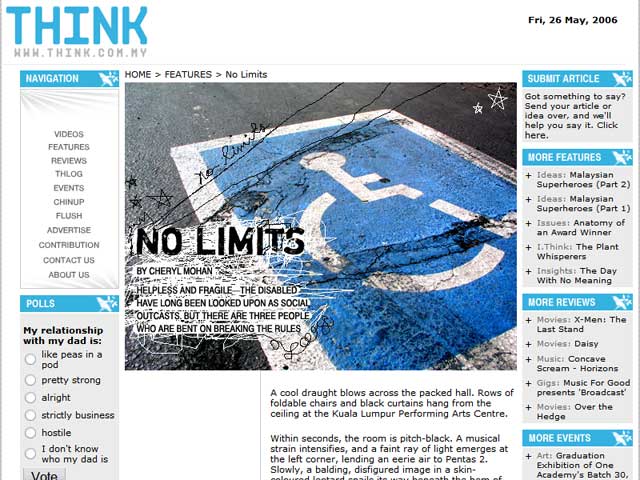 No Limits
by Cheryl Mohan

Helpless and fragile – the disabled have long been looked upon as social outcasts. But there are three people who are bent on breaking the rules.

A cool draught blows across the packed hall. Rows of foldable chairs and black curtains hang from the ceiling at the Kuala Lumpur Performing Arts Centre.

Within seconds, the room is pitch-black. A musical strain intensifies, and a faint ray of light emerges at the left corner, lending an eerie air to Pentas 2. Slowly, a balding, disfigured image in a skin-coloured leotard snails its way beneath the hem of the curtains. She is crawling, gliding, rolling back and forth; struggling to make her way to the centre of the hard surface.

This was the opening scene—‘The Fetus in the Darkness’—of the performance entitled My Mother, by Taihen, the first performing arts group in the world made up purely of physically handicapped people.

“I prefer to use the word ‘metamorphosis’ to define Taihen,” explains the troupe’s Korean-Japanese artistic director and chief headliner Manri Kim.

From a young age, Kim often mimicked the performance of mother Honju Kim, a Korean traditional dance artiste who actively performed during World War II in Japan. She was the anointed successor—until she contracted polio at the age of three, leaving her severely disabled. She was then sent to a home for disabled children at seven, and stayed there for the next 10 years.

It was here that Kim honed a fierce resolve to be more than just a social white elephant. “My mother and teachers had the mindset that it would be hard for a person with a severe disability to blend in with the public. I was determined to prove them wrong.”

Together with her similarly disabled friends, Kim decided to learn to live as an independent, contributing member of society. She went from college to college with her comrades, handing out flyers and seeking volunteers who would be willing to support and help the group.

“The movement was based on the idea that you didn’t have to be specially trained to take care of a disabled person,” she says. “Anyone and everyone can and should be a helper or supporter of the disabled.”

It was a cry of freedom. A statement of strength. It carried the message that despite your limitations, you can help yourself and others around you. And Kim was not alone.

BIGGER THAN THEIR BODIES
At 18, Peter Tan was diving at a swimming pool when he broke his neck. The accident left him with an injury to the spinal cord, and Tan was left paralysed from the chest down. Soon after, his mum was diagnosed with cancer and was referred to Rumah Hospice for more than a month before she died.

Tan remained resilient however. “After my mom passed away, I explored ways that I could help the hospice. These were people who gave hope when all hope looked lost.”

Immersing himself in numerous charitable organisations such as the Independent Living for People with Disabilities and the Japan International Cooperation Agency, Tan hasn’t looked back since. Now a popular blogger, the 39-year-old Penangite recently shaved his flowing long hair to raise funds for the Hospice-At-Home Programme at Rumah Hospice. Together with four other friends, they pledged to shave their heads for a donation of RM5,000. To their delight, they raised slightly more than the targeted amount.

Another person who has risen above her plight is Yvonne Foong, a 19-year-old diagnosed with neurofibromatosis type 2—a genetic disorder that causes tumours to grow in her brain, spine, and along various nerves. Together with her friend John Ling, they have both embarked on a mission to encourage creative writing in the nation.

“Whenever we come across any aspiring writers or even people looking to get published, we encourage them wholeheartedly, offering advice and even helping out where our abilities are needed,” says Foong. Her website has even helped someone obtain a proper diagnosis of neurofibromatosis after his wife stumbled upon Foong’s blog. Her husband was spared from further complications, and they have become kindred friends ever since.

“Many people tend to look on people with disabilities as a group that needs help and welfare,” says Tan. “[But] given the right tools, support and a suitable environment, we surely are able to contribute more to society and help others who are in need.”

For a polio casualty, Kim is remarkably busy these days with Taihen. The ensemble was birthed in 1983 after Kim’s simple observation of the way each of her handicapped friends ate, talked and moved about.

“I became aware that every physical movement made by them was unique and different from each other. Although their mobility was restricted, they were still able to crawl, wriggle, squirm, walk, run and jump without aid. There was beauty and artistic form that went along with their supposed twisted and distorted body,” she describes.

Traveling to various parts of the world such as Kenya, Taiwan, Korea and Malaysia, Kim’s message is always the same: be proud of who you are. “Don’t be afraid to acknowledge that you are disabled,” she declares. “Don’t compare your body movements with someone who is ‘normal’. You can do what others can’t do. The more physically impaired you are, the more unique your movements can be.”

With a golden opportunity for physically handicapped individuals to express themselves and inspire others, people with cerebral palsy, spine tuberculosis, muscular dystrophy and other disabilities have jumped at the chance to demonstrate their passion and spirit. A dream once thought lost has been reignited.

As Foong puts it, encouragement has brought her past the stereotyping into a new level of confidence, best seen by the publishing of her autobiography I’m Not Sick, Just a Little Unwell. “Do buy my book when it’s published,” she says. “Even if you think the book is not good enough, at least it gives me a sense of accomplishment, that even a limited person like me can publish a book and sell it. It’s about giving us hope, directly or indirectly.”

With only a malformed arm to assist her, Kim manoeuvers her lifeless legs and shapeless body. She rolls on the floor, using her mouth to move her legs by biting the toes, and her chin to push it around. She plays the Chinese drums by placing the drumsticks in between her crooked fingers. She proudly shows off every detail of her disability—from her twisted hip to her bent limbs—with only intermittent pauses in between acts.

As the fifth and final scene closes, Kim takes a bow from her sitting position. Without hesitation, the crowd gives an awestruck standing ovation. Those who can’t stand, bound by the constraints of their wheelchair or walker, rain their own applause down, mesmerised by the sheer determination on display.

Cheryl is an editorial intern. E-mail the author.

2 thoughts on “Think Online – No Limits”