Back to the ‘Stone Age’

The Web generation was crippled when the Internet was disrupted by an earthquake near Taiwan which damaged underwater cables last week. Surfers gripe about life without blogs and websites.

No Internet, no life. That phrase rings true for so many of us who have come to take the World Wide Web for granted. 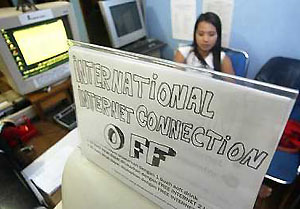 So it was that when that earthquake damaged underwater cables off the southern coast of Taiwan last Tuesday, cries of dismay rang out all over Asia as Internet users were suddenly thrust back into the “Stone Age” of not having a proper Internet connection.

For some, the implications simply meant that they had to find something else to occupy their time with.

For instance, Idham Zuhri Mohd Yunus, 27, who spends a lot of time online every day (almost nine hours a day), decided to catch up on his reading, and go out to meet his friends more (in other words, he decided to get a life).

“Sure, my online social life has been affected because I can’t blog, I can’t chat online, and I will be left behind in a lot of online forum discussions, but life goes on. I’ll just have to go back to work instead!” he said.

Meanwhile, avid blogger Jolene Lai (http://www.jayelleenelial.com) has been feeling less motivated to blog these days. Why? Because it takes forever for her to update her blog, thanks to the insane amount of pictures she posts there (which earned her blog the nickname “the 56k Killer” because it takes forever to load her image-heavy blog if you are on a 56k dial-up connection).

She is also upset that she can’t update her blog as regularly as she’d like to. “I just came back from a trip, and I wanted to blog about that, but now I can’t,” said the 19-year-old dental student, who spends an average of eight hours a day online. So what does an Internet-deprived teenager with all that Internet-free time then? Well, there’s always shopping, watching TV, and studying, of course. “Strangely, I haven’t been affected by it much this time. Usually, I would die if I didn’t have an Internet connection,” she laughed.

Some Internet users were not as amused by the Internet disruption, though. For blogger Paul Tan, it was a seriously dire situation.

Paul’s website – Paul Tan’s Raves and Rants on the Automotive Industry (www.paultan.org) – commands at least 20,000 unique hits a day; and the revenue generated by web-based ads on his blog accounts for a huge chunk of his monthly income.

“I am very, very dependent on the Internet. I need to do research, to verify my facts and keep up with international news (on the motoring industry) so that I have new posts for the blog,” he explained.

Although his daily traffic has hardly been affected because the blog is hosted on a local server and his readers are mostly Malaysians, his main problem is the lack of new updates (which will affect returning traffic), and the fact that most of his ads are loaded from servers in the United States.

“When the Internet goes down, my site can’t load the ads, so my earnings from there will drop,” he said, estimating a 30-40% drop in income as a result of that.

Fortunately, Paul managed to find an alternative way to connect to the Internet.

“By hook or by crook, I had to have an Internet connection, so I spent some time looking for other ways to get online,” he said. “I got a few tips on how to work around the problem, and now I’m back to normal after being ‘dead’ for one and a half days.”

While it did not affect him much financially, the lack of Internet access has disrupted disabled blogger Peter Tan’s (http://www.petertan.com) routine in other ways.

Confined to a wheelchair since 18, the Internet is Peter’s window to the world, allowing him to talk and socialise with his friends and fellow disabled, and also acting as his daily source of information and entertainment.

“I am online almost 10 hours a day, from the time I wake up in the morning, until I go to sleep at night,” he said. “Not having an Internet connection affects us (the disabled) quite badly since it’s not easy for us to go out, and we mostly use Internet chat programs or e-mail to communicate with one another. We can’t use the phone all the time because it would be too costly for us.”

Without the Internet, Peter has to settle for watching TV, and catching up on his reading of archived notes. “I’m definitely less productive without the Internet. I rely on it to do research for my projects and presentations (Tan is actively involved in activities on disability issues) and since most of this information is on international websites, which I have difficulty getting to now, my work and research has been greatly affected.”

It’s not just bloggers who have been affected by the loss of Internet. For some people, the lack of connectivity has a serious impact on their jobs as well.

Take systems engineer Sharuzzaman Ahmat Raslan, 27, for instance. His job of configuring network servers and desktop computers depends a lot on having a good Internet connection.

“The Internet is critical to my job, because I usually need to refer to online resources when I need help in certain configurations that deal with open source programmes,” said the 27-year-old.

Most open source development is conducted in the United States and Europe, and hence the documentation he needs are all hosted there.

According to him, with the Internet breakdown, a job that normally takes him only three days to complete will now take twice that amount of time because he has to spend most of his time looking for mirror websites that host the resources he needs.

“Most of the time, I’m not even doing my job but am wasting time looking for the mirrors. I’m still getting work done but at a much slower pace,” he said. “I’ve taken for granted that the Internet is always there, so I never bothered downloading the documentation and printing them out. Maybe next time I’ll have to do that…”