The United Nations Convention on the Rights of Persons with Disabilities (CRPD) was adopted by the General Assembly on December 13, 2006. This is a significant step for 650 million disabled persons worldwide who have been subjected to discrimination in more ways than one for a very long time. By signing this landmark Convention member nations affirm their commitment in ensuring equal opportunities for disabled persons in all strata of society.

Among the forty or so countries that have announced that they will sign the Convention on March 30 when the CRPD is opened for signing at the first instance are Mexico, New Zealand, Vietnam, United Arab Emirates and Sri Lanka. Ironically, the bastion of freedom and democracy, the United States of America has not indicated that they will sign to be a party to the CRPD. Likewise, the Holy See had informed the General Assembly that they will not sign as they oppose to several articles in the CRPD.

The American Association of People with Disabilities (AAPD) is concerned that “by not signing, the United States would be departing from their historic role as an international leader in the field of disability and human rights and may inadvertently discourage other countries from signing.” AAPD has initiated a campaign to ask its members to write to Members of the Congress to “to urge the President to sign the UN Convention on the Rights of Persons with Disabilities and its Optional Protocol on March 30th.” 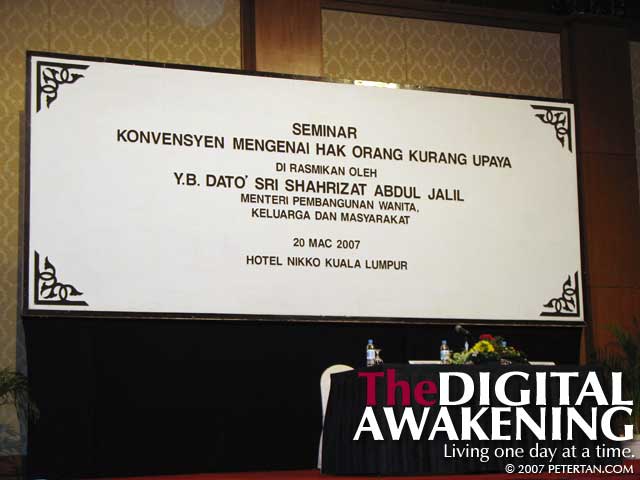 In Malaysia, the Ministry of Women, Family and Community Development (Kementerian Pembangunan Wanita, Keluarga dan Masyarakat), Department of Social Welfare (Jabatan Kebajikan Masyarakat Malaysia) and Japan International Cooperation Agency together with the cooperation of the Malaysian Council for Rehabilitation (MCR) and Malaysia Confederation of Disabled (MCD) organised a seminar on the CRPD on March 20, 2007. 400 disabled persons, officers from various ministries and agencies and representatives from NGOs attended this event at Nikko Hotel in Kuala Lumpur. 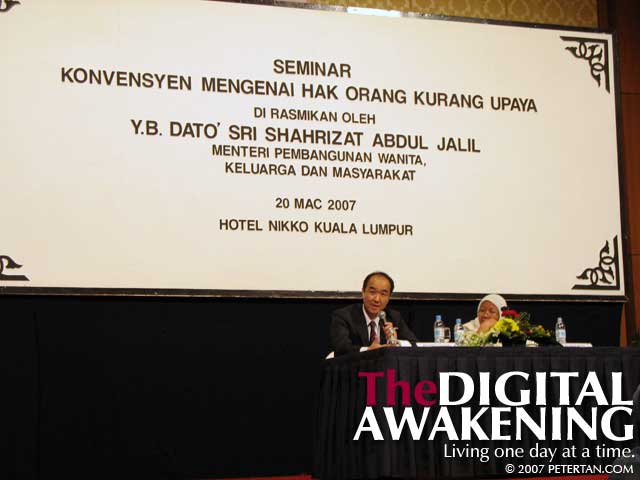 Osamu Nagase, Associate Professor on Disability Studies at the University of Tokyo Graduate School of Economics was the main speaker. He shared with participants the history of the international disability movement and the chronology of how the CRPD came to be in its present and final form. He also gave us a rundown on some of the more important articles contained in the CRPD. Basically, the CRPD does not create new rights but to affirm that disabled persons have the same rights as non-disabled persons. 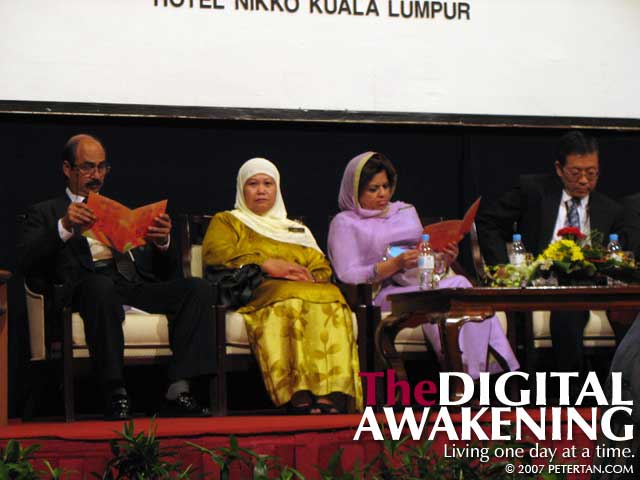 During Dato’ Sri Shahrizat Abdul Jalil’s speech at the opening ceremony, she informed participants that Malaysia will sign the CRPD but not on March 30 as there are issues with some of the articles in the CRPD that need to be resolved first. The contents have to be agreed upon by the various Ministries then taken to the Cabinet for approval before Malaysia can become a signatory to the CRPD. In the same speech, she also spoke about the Disabled Persons Act which is at its final stages of drafting. The earliest the Bill can be submitted to Parliament is during the last sitting for the year. The Ministry has been working on the details of this Act since 2002. 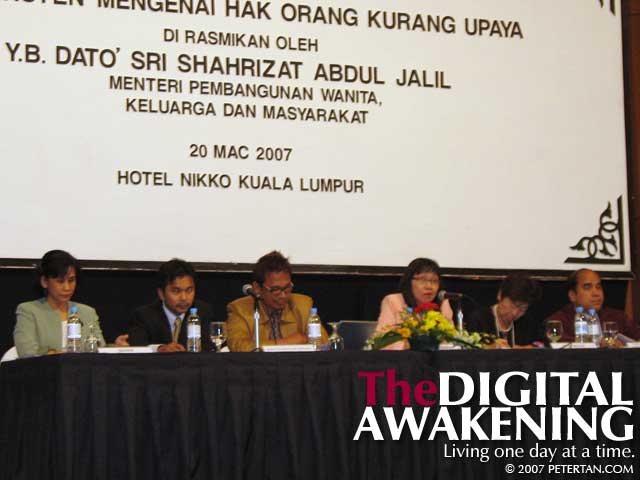 Perbincangan Panel – Stakeholders Perspectives on UN Convention On The Rights Of Persons With Disabilities.

After lunch-break, a discussion by a panel of stakeholders spoke about Malaysia’s stand on the CRPD. The guests were Cik Noraini Hashim, Pengarah Bahagian OKU of JKMM, a legal officer each from the Attorney-General’s Department and the Ministry of Women, Family and Community Development, Dr. Chiam Heng Keng of Suruhanjaya Hak Asasi Malaysia (SUHAKAM) and Mah Hassan of MCD.

The two legal officers in separate presentations informed participants that Malaysia has reservations with Article 15 which is about “Freedom from torture or cruel, inhuman or degrading treatment or punishment.” This Article contradicts Malaysian law because of the penal code with provides for capital punishments such as whipping. If Malaysia were to adopt that, it would mean that disabled persons would have to be exempted from such punishment under the law.

Malaysia will also not sign the Optional Protocol to the Convention on the Rights of Persons with Disabilities, Article 1 of the OP states that “A State Party to the present Protocol (“State Party”) recognizes the competence of the Committee on the Rights of Persons with Disabilities (“the Committee”) to receive and consider communications from or on behalf of individuals or groups of individuals subject to its jurisdiction who claim to be victims of a violation by that State Party of the provisions of the Convention.”

This seminar left many unanswered questions with regards to the rights of disabled persons in this country. The status of the Disabled Persons Bill is still unclear. There is also a question of how many more reservations Malaysia has with the articles in the CRPD. What is the basis of Malaysia’s refusal to sign the OP? Last but not least, there is no single agency within the government that oversees all disability-related issues. This makes it very difficult for advocates of disability issues as we have to deal with different and separate ministries on transportation, built-environment, education and employment, among others. Until a time when Malaysia has a dedicated agency that has the authority to compel all ministries to address disability-related issues, disabled persons will have to run from one ministry to another just to get a single issue resolved. Apa macam Malaysia?