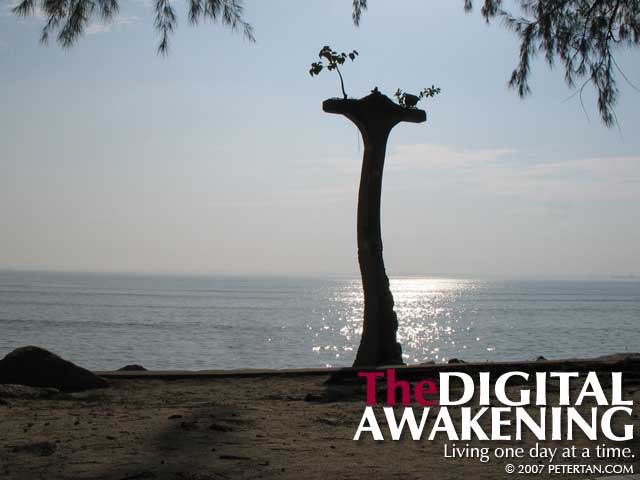 There is actually a life for me apart from advocating for an accessible public transport system in Malaysia and working on disability-related projects. This blog however has been telling a different story. Lately, there are only entries after entries of cut and paste news and updates on activities of the Barrier-Free Environment and Accessible Transport Group (BEAT). Admittedly, these issues take up a fair bit of my time. Nevertheless whenever possible I always try to squeeze in a little leisure time in between to free my mind from too much clutter.

Despite the hectic weekend when we were in Penang two weeks ago, Wuan and I managed to take a leisurely stroll along the promenade at Gurney Drive that Sunday morning. The pungent smell of the sea and mud was unmistakable. The tide was out. Towering casuarina trees standing between the sea and the promenade provided some shade from the fast rising sun. Although much has changed since my preteen days, images of digging for siputs by the beach are still very vivid in my mind. What once was a beautiful white sandy beach is now reduced to a smelly mud plain filled with indiscriminately strewn litter.

Gurney Drive is still one of the few places in Penang that never fails to evoke memories of a time long gone. In the serenity of the morning, I desperately tried to recapture the once familiar sight and sound of the ice cream man. He had a box securely fastened to the back of his bicycle. It would be laden with ice cream on the inside and ice cream cones in transparent plastic bags hanging on the outside. The familiar rhythmic ringing of his bell was such sweet sound to my ears. I thought I heard the ringing again that morning.

It was after looking around in futility for the source of the ringing that I realised the child in me who still yearned for those good old days rang the bell inside my head. Life was less complicated then. Perhaps it was my subconscious way of trying to shut out the rigours of the present. With that realisation the bell stopped ringing. There and then I knew that I have embarked on a journey that is taking me further and further away from this island that I have called home for forty years.

The sea was rushing back in. The salty smell still lingered in my nostrils. The heat from the sun was becoming unbearable. I wished that time would stand still for a moment so that I could savour that one second a little longer. But time and tide waits for no one. All I could do was hope that ten years from now I can still remember the nostalgia I felt that morning. I was overcome by sadness. I realised that each time I return to Penang and leave again, my ties with this island unravels a little more.

4 thoughts on “Gurney Drive – A Sea Of Nostalgia”