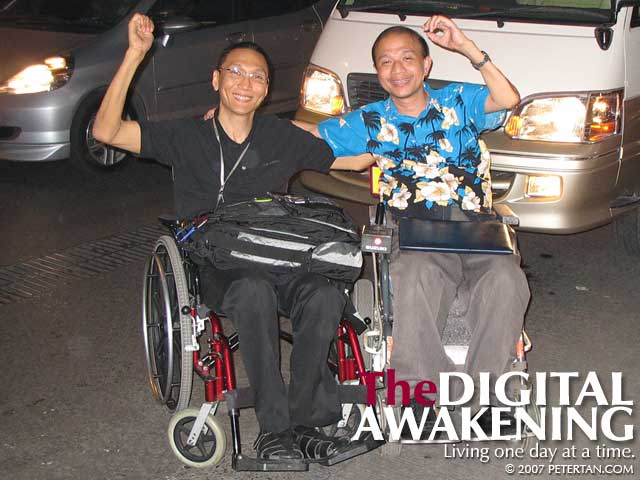 For freedom and equality – Peter Tan and Topong Kulkhanchit at Nonthaburi Thailand, March 2006.

When I received an email from STEP Project Manager of Pakistan Abia Akram saying that Topong Kulkhanchit had passed away, I just could not believe it. In turn I contacted Shoji Nakahishi of the Human Care Association in Japan to confirm the news. Sadly it was true. Topong, as he was fondly called, passed away at 1310 1240 hours (Bangkok Time) at an army hospital in Thailand today. According to Shoji, he had just returned from giving a presentation in Bangladesh.

Topong was the Regional Development Officer for the Disabled People’s International Asia-Pacific which is based in Nonthaburi Thailand. He was a true-blue advocate and activist who loved what he did. When I met him for the first time during the training at the Asia-Pacific Development Centre on Disability (APCD) in Bangkok, he had a yellow scarf around his neck to show allegiance to Thailand’s king and also as a symbol of the anti-Thaksin coalition.

I thought to myself, “Here is a very brave man who is doing great things, not only for his peers with disabilities but also for his nation.”

Therefore, there was a great reluctance in my heart to accept that this great person has left us so soon and so suddenly. There is still so much that he can do to contribute to the disability movement in Thailand and the Asia-Pacific. There is still so much that we can learn from him. He was a free spirit and very charismatic. He never let his disability stop him from living life to the fullest. His demise has left a gaping void in the disability movement that will be difficult to fill.

We shall carry on the advocacy on equality for disabled persons from where you left off.