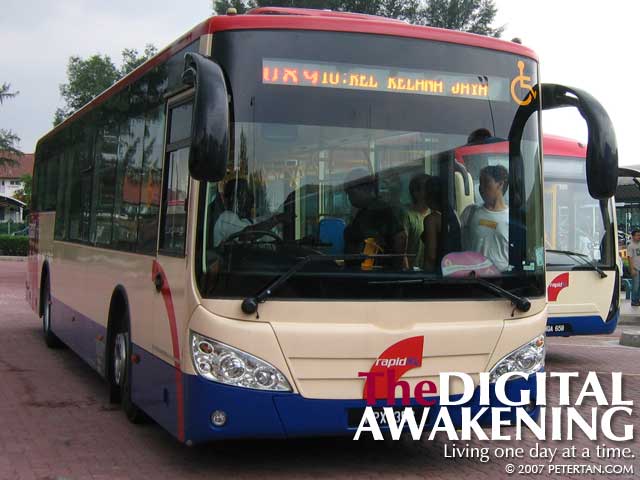 Rangkaian Pengangkutan Integrasi Deras Sdn Bhd or more commonly known as RapidKL is a subsidiary of Syarikat Prasarana Negara Berhad (SPNB). In turn SPNB or better known as ‘Prasarana’, is the ultimate holding company under Ministry of Finance Incorporated. If RapidKL is a reflection of how Malaysia is being managed, we are all in deep trouble. After 10 months of tinkering with the non-step buses, they still cannot get it right. Wheelchair users are still not allowed to use the buses.

RapidKL Corporate Communications Division Senior Manager Katherine Chew announced on September 24 last year that the bus company would be bringing in 100 non-step buses after the newly-formed Barrier-Free Environment and Accessible Transport Group (BEAT) organised a campaign to check on the accessibility of bus at the Bangsar LRT Station.

Subsequent to that BEAT met with RapidKL CEO Rein Westra in October 20 and presented him with a memorandum outlining the basic requirements of an accessible bus system that fulfils not only the transportation needs of disabled persons but also senior citizens, pregnant women and adults with prams, among others.

During the meeting, Westra requested to be given four weeks for him to present a proposal to the government on the accessible buses and get back to us. He also repeatedly reminded BEAT not to speak to the press regarding this issue for that duration and threatened to cut all communications with us should we not honour that moratorium. That was the first and last time we heard from him although we kept our part of the deal.

During a trial ride of the RapidKL accessible buses on April 26 around the city, BEAT again informed RapidKL of the unsuitability of the ramp and docking system. At the trial ride it was also discovered that there are not many bus stops suitable for the accessible buses due to the extreme differences in height. The lowest the accessible buses can go was 15 inches. The highest bus stops, which forms part of the walkway, was only 10 inches. This mismatched heights made the ramp too steep for unassisted boarding.

On May 4, RapidKL COO Mohd. Ali Mohd. Nor announced at a pre-launch briefing that accessible bus service will be launched on June 1. The event was attended by Ministry of Women, Family and Community Development Parlimentary Secretary Datin Paduka Chew Mei Fun, members of the print and electronic media and about 50 representatives from various NGOs working together under the BEAT banner. Again, we informed RapidKL regarding our concerns with the unsuitability of the ramps and docking system.

The last meeting BEAT had with RapidKL was on June 13. Katherine Chew represented the bus company. At the meeting, we categorically rejected the accessible feature of the buses citing safety concerns. Following that meeting, BEAT sent an email to RapidKL with a 4-point recommendation:

1. Improve the gradient of the ramp to ensure safety of the wheelchair users and persons assisting while boarding and alighting from the bus. This can be achieved via various mechanisms that are commercially available for such purposes.

2. The ramp should be of the same level from end to end. Sudden drops or bumps should be eliminated. In the current design the sharper gradient at the edge of the ramp may cause wheelchairs to tip over even with assisted boarding.

3. Install four point strap-type tiedown to firmly secure wheelchairs. The current single wheel docking clamp is insufficient to fully restrain the wheelchair in the event of collision or sudden braking.

4. To include BEAT members in all stages of design and installation of such features to ensure safety and functionality.

All in all, BEAT has informed RapidKL on more than four occasions regarding the ramps and docking system. Until today, nothing has been done to rectify the problems we pointed out. The buses are already on the road picking up passengers. However, as the buses were never officially launched despite what was announced during the pre-launch briefing, bus drivers refused to pick up wheelchair users because according to them, their management has instructed them not to do so.

Reading the chronology of the entire fiasco, I can only come to a conclusion that RapidKL never thought out properly all the factors of an accessible bus system when they hastily announced the acquisitions of 100 accessible buses. The design of the bus stops were never put into consideration at the time of acquisition. RapidKL unilaterally designed the ramps and docking systems according to their own understanding of how these features should be.

Now, RapidKL has 100 non-step buses that were supposed to be usable by wheelchair users but are not. How much money was spent in installing these buses with a non-functional accessible features? The biggest mistake on RapidKL’s part was in not consulting with disabled persons on the design. Disabled persons, especially wheelchair users, were never consulted on the suitability of the accessible and safety features. This kind of attitude goes against the motto of the 2004 International Day of Disabled Persons which was “Nothing about us without us.”

The management of RapidKL must understand that ultimately people in wheelchairs and other forms of disability are the end users. We are the people who will be using these buses everyday. We have no other alternatives to move around conveniently, especially people who have severe disabilities. We must be consulted every step of they way to ensure that the features installed to serve our needs are safe and functional.

The irony of all this is that RapidKL, Prasarana or even the government has no long-term plan to ensure that their entire bus fleet will be fully accessible but at the same time we keep seeing new but non-accessible buses being put into service. While the public transport needs of the general public are continually being improved, disabled persons are still being left behind – marginalised from mainstream society by the tidak apa attitudes of the people tasked with providing public transport with money that came out from taxpayers’ pockets.

The government must shoulder the blame entirely for this debacle. The Ministry of Finance, Ministry of Transport, Minstry of Entreprenuer and Co-operative Development and the Ministry of Housing and Local Government, among others, are responsible in part in their respective capacities to ensure an accessible public transportation system. After spending so much money to bring in non-step buses and fitting them with accessible feature, these buses are still not functional due to so many reasons and problems that are associated with so many ministries who are not actively doing their part in solving the said problems. It is time Prime Minister Dato’ Seri Abdullah Ahmad Badawi step in to ensure that public transportation problems of disabled persons are settled once and for all.

Pak Lah, we are humbly pleading with you to lift us out of this predicament. Help us solve this where your other ministers have failed. We, the disabled people of Malaysia, needs an accessible public transport system to help us go to school to get an education; allow us to commute to our places of employment; participate in social, cultural, religious and political activities. We need an accessible public transport to become part of society. Apa macam Pak Lah?