KUALA LUMPUR: She is a capable woman and presentable enough to be a newscaster – but she could not get long-term employment because she is wheelchair-bound.

Prime Minister Datuk Seri Abdullah Ahmad Badawi, stressing that he wants Malaysia to have a culture of caring where those who need help know they will receive help, said it reminded him of the woman.

“She looks good and capable. I told her she could be in front of the camera or become a compere.

“But she told me, she had yet to find a job,” Abdullah said, not naming the woman. 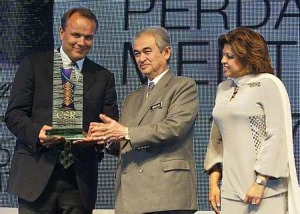 Best of the lot: Abdullah presenting the overall award to DiGi chief executive officer Morten Lundal at the Prime Minister’s CSR Awards presentation in Kuala Lumpur yesterday while Shahrizat looks on.
“No one wanted to employ her because she sat in a wheelchair,” he told corporate bigwigs at the Prime Minister’s Corporate Social Responsibility (CSR) Awards presentation here yesterday.

Representatives from Petronas, Maybank, BP Malaysia, DiGi Telecommunications Sdn Bhd and Procter and Gamble (Malaysia) Sdn Bhd were among those who attended the event.

“Companies must give attention and be ready to employ disabled people who are able to perform the tasks given and do something for the company,” he said.

Abdullah said jobs should be offered to suitable candidates even if they were handicapped, adding that this is what folks in a caring society would do.

The Prime Minister said a progressive Malaysia meant that the people would enjoy quality of life.

More important, he added, the disadvantaged – such as the sickly, the poor and the handicapped – are assured they also have a place in this country and would be well cared for.

He said the nation and its people had demonstrated its caring nature in many ways and it was a contribution he hoped would continue to flourish.

The awards are given in recognition of companies that carry out strong community and social responsibility projects.

There were 316 entries from 161 companies for the award. They competed in seven categories, including education, environment and workplace practices.