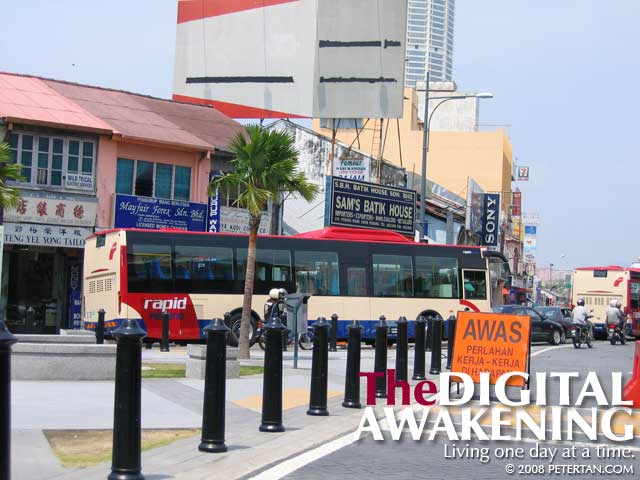 Is the OKU Card issued by the Department of Social Welfare not good enough? Why is there a need to inconvenience applicants by asking them to get certification from government doctors or the Health Ministry as well? That is not all! Why in heaven’s name do they need a photo showing the impaired anatomy? This is ridiculous. This is disregarding the dignity of disabled people. What? The doctor’s report is not good enough also? The OKU Card is not valid? The people in RapidPenang think the officers in the Department of Social Welfare do not know what they are doing?

Do the people in RapidPenang know what physical disability is in the first place? Can they determine that from a photograph? I am disabled from my chest down. Do I need to pose in the nude to prove it should I intend to apply for the card? Furthermore, why burden disabled people by asking them to incur extra expenditure in getting their anatomy photographed?

If RapidPenang is sincere in giving out concession fare to disabled people, they should make the process as simple as possible. An OKU Card issued by the Department of Social Welfare should be sufficient. I believe RapidPenang’s intention is to alleviate the financial burden faced by disabled people. This noble effort is spoilt by overzealous people that are not in touch with disability issues or have never met disabled persons before. Shame on you RapidPenang for degrading the dignity of disabled people.

After much protest from the disabled community in Penang, Rapid Penang finally revoked the condition for a photograph showing the body part of physical disability. This was conveyed through a mailing list. Rapid Penang also informed members of the mailing list that they have issued a statement to the media regarding this issue but I could not find the news report online. Nevertheless, Rapid Penang still made it mandatory for disabled people who want discounted fares to apply for the concession card.

For two consecutive days since yesterday, The Star published two news reports that senior citizens and disabled people who are registered with the Department of Social Welfare need only to show the OKU card to enjoy half fare on RapidKL and Rapid Penang buses. This should have been the case in the beginning. Who were the smart alecks in the Syarikat Prasarana Negara Berhad, RapidKL and Rapid Penang who imposed the previous conditions that only the concession card holders were eligible for discounted fares? After all that fuss, now all disabled people need to do is to flash the OKU card. What a waste of time and resources for everyone involved in the exercise.

But, do not be mistaken that disabled people can ride the RapidKL and Rapid Penang buses. Wheelchair users are still not allowed to board the RapidKL buses with the wheelchair logo that are running in the streets now. This is because the Barrier-Free Environment and Accessible Transport Group (BEAT) refused to give the go-ahead to RapidKL to endorse the buses due to safety concerns regarding the ramps and wheelchair docking systems. The buses were supposed to be officially launched by a minister on June 1, 2007. So now we have buses that were fitted with accessible features at great cost that wheelchair users cannot use. As far as I know BEAT has washed its hands off working with RapidKL on this issue and prefer to concentrate on AirAsia.

As for Rapid Penang, disabled people were informed that 40 of the 150 buses operated by the bus company had ramps for wheelchair users initially. Unfortunately, according to Rapid Penang, the bus stops were damaging the ramps and they had to be dismantled to avoid further damage to the buses. This is evidence of another slipshod work by the people involved. I believe no study was done to ascertain the condition of the bus stops and other infrastructure before the buses were fitted with the ramps. In addition to that, there is no communication between the bus operators, namely RapidKL and Rapid Penang with local authorities to come to an agreement on the standard design of bus stops and all connecting pathways to the bus stops to make them accessible and complement each other.

There was also talk that Rapid Penang will bring in another 100 buses with facilities for wheelchair users. If I am not mistaken, these buses were slated to be put on the road by the end of 2007. We are already into the second month of 2008 but no such buses are in sight. Disabled people have been disappointed again and again by one too many sweet assurances such as this. Despite all the hard work by disabled people and a small group of concerned supporters advocating for accessible buses in Penang, there is no hint that such buses will be made available in the near future.

Wheelchair users in Kuala Lumpur and Penang are still left out from the public transport system. There is no way to move around conveniently. To put it crudely, disabled people have been conned once again. Lets not talk about a masyarakat penyayang when there was never any sincerity in looking after the interests and welfare of disabled people in the first place. All my entries on RapidKL and Rapid Penang are ample proof of it. So what if I have the OKU card? So what if I can get 50% discount with it? There is no way I can ride on these buses. I would not mind being charged the full fare if the buses are wheelchair-friendly. But none are. Truly, disabled people have been taken for a ride over and over again. Apa macam Pak Lah?

Show Social Welfare ID to get 50% off on Rapid buses

PENANG: Effective Monday, senior citizens and the disabled registered with the Social Welfare Department need only show the identification cards issued by the department when travelling on Rapid Penang and RapidKL buses to get a 50% discount.

To reduce red tape, the Government has done away with the requirement for them to apply for the Rapid Card, issued by the companies.

“We want to simplify things. It is sufficient for them to show the card issued by the department to obtain the 50% ticket concession,” said Second Finance Minister Tan Sri Nor Mohamed Yakcop.

He was speaking to reporters at the St Nicholas’ Home here on Saturday.

Rapid Penang chief executive officer Azhar Ahmad, who was with him, said it takes about two weeks for the company to process each card application.

Nor Mohamed said the problems that prompted the one-day strike by Rapid Penang bus drivers last Monday had been resolved.

“It is a small problem. When there is a problem, we look at it positively and resolve the matter quickly,” he said.

Thousands of bus commuters rushing for work and last-minute Chinese New Year shopping were left stranded on Tuesday when the drivers brought transport to a standstill.

PENANG: From tomorrow, the disabled and senior citizens registered with the Social Welfare Depart-ment need only to show their identity card issued by the department to enjoy half fares on Rapid Penang and RapidKL buses.

To reduce red tape, the Govern-ment has done away with the requirement for them to apply for the Rapid Card issued by the companies.

“We want to simplify things. It is sufficient for them to show the card issued by the department to obtain a 50% ticket concession,” Second Fi-nance Minister Tan Sri Nor Mohamed Yakcop told reporters during his visit to the St Nicholas Home here yesterday.