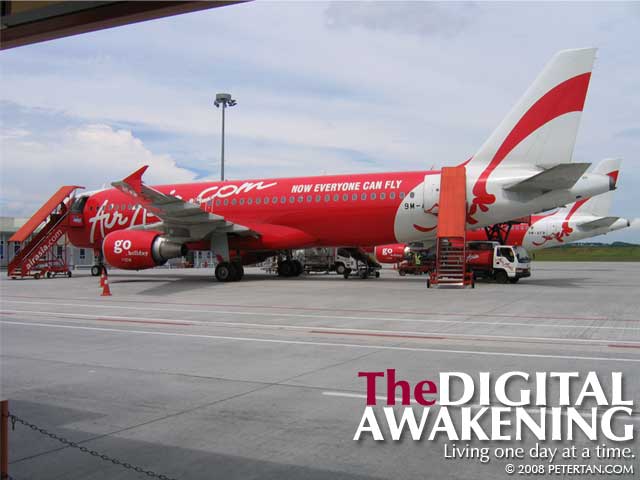 The government has given the greenlight for another Low-Cost Carrier Terminal (LCCT) to be jointly developed under a private finance initiative between conglomerate Sime Darby Bhd and AirAsia. The proposed airport currently dubbed the KLIA East would be built on a 2,800ha plot of land in Labu which is between Nilai and Bandar Enstek.

The Star reported in AirAsia: We can give better deals with own airport that the airline’s budget fares will go even lower with at least a 15% reduction in prices when the airline’s proposed low-cost terminal opens in Labu, Negri Sembilan, in February 2011. That is good news for travellers who are always on the lookout for the best deals in air fares to stretch their ringgit even further.

However, my concerns are more than cheaper air fares. Will the new terminal be built according to the principles of universal design? Will disabled people have unimpeded access to all public areas in the terminal? Will wheelchair users still need to board the aircraft via an ambulift? If we have to and when one is unavailable will there be a safer and more convenient method of boarding other than to physically carry us up to the aircraft? Will this better deal include a waiver of the RM12 fee for using wheelchairs provided by the airline? Really, can AirAsia give a better deal to all its passengers irrespective of whether they are disabled people or otherwise with its own airport?

The Star Online
Sunday December 21, 2008
AirAsia: We can give better deals with own airport
By LESTER KONG

KUALA LUMPUR: AirAsia’s budget fares will go even lower with at least a 15% reduction in prices when the airline’s proposed low-cost terminal opens in Labu, Negri Sembilan, in February 2011.

A senior AirAsia official said the airline’s plan was always to look for a cheaper venue to lower costs as it was paying about RM100mil in airport fees yearly to Malaysia Airports Bhd.

“We have been looking for another place for a long time, whether it was to buy or build a new airport,” he told The Star yesterday.

The official said the current terminal in Sepang was only a temporary measure as it could comfortably handle only 10 million passengers yearly.

“By March next year, it would reach 15 million. AirAsia needs an airport that can handle more than 15 million by 2011,” he said.

The Cabinet on Friday gave the greenlight for the new RM1.6bil airport to be developed under a private finance initiative between conglomerate Sime Darby Bhd and AirAsia on a 2,800ha plot in Labu, which is between Nilai and Bandar Enstek.

The new terminal will be large enough to handle some 15 million passengers yearly and will feature a wider array of shops as part of an integrated city in Labu, comprising five townships and facilities for education, health, sports, high technology and entertainment.

Closer to the nation’s capital than the current low-cost carrier terminal, a 7km link to the North-South Expressway was also slated to be built, along with an Express Rail Link to KL International Airport.

“We will provide shuttles between the main terminal and LCCT. The road and rail links between KLIA and the new LCCT would also be privately financed,” he said.

The AirAsia official said the cost of operating the new airport would be lowered by incorporating advanced technology and it being run privately.

“The airport will be built entirely by us. The latest technology and better retail facilities will mean more money. More money will mean lower airport tax and fares.”

According to him, the proposal was brought up by Sime Darby in the first place as they wanted an airport in the centre of a large development project – to turn the area into an Asean community hub.

4 thoughts on “Can Air Asia Really Give A Better Deal?”