Wuan and I were in Ipoh from Saturday to Tuesday for Chinese New Year celebrations. We had planned to make our way up north at 6am to beat the notorious festive season crawl at the North-South Expressway. A series of unexpected events held us back in Kuala Lumpur until 11am. When we reached the Jalan Duta toll plaza, we had the first taste of what we would experience for the rest of the journey. It took us five hours to drive from Kuala Lumpur to Ipoh for a trip that usually took two hours only.

Traffic was crawling most part of the way. What made it worse were irresponsible drivers who breezed through the slow-moving traffic on the emergency lane and then abruptly cutting back into the expressway proper whenever there is a stalled vehicle on the emergency lane or they caught sight of the Polis Lebuhraya 4WD with the blinking blue lights in the distance. For many of these smart alecks, by the time they saw the police, it was already too late. There was no way to escape in the crawling traffic. We even witnessed a highway police walking to the right lane to flag down an MPV.

After spending four days, we left Ipoh on Tuesday at 4pm, half expecting another five hour drive back to Kuala Lumpur. Fortunately, traffic was moving at a faster pace except for a few kilometers before the Tapah Rest and Service Area. Emergency lane hoggers were aplenty. Law enforcers were out in full force too. Somewhere along the expressway, there was a joint enforcement by the Polis Lebuhraya, Road Transport Department officers and PLUSRonda personnel catching emergency lane hoggers. As we drove pass, the driver of the Mercedes Benz that overtook us at very high speed on the emergency lane was being issued a ticket by an RTD officer.

The drive back took three hours. The heavy rain in Rawang slowed traffic to a crawl again. Visibility was poor in the failing light. We reached Kuala Lumpur at around 7pm, worn out but glad that we got back safely. What still puzzles me till now is why drivers still want to use the emergency lane knowing that it is an offence and there will be a fine if caught. Abusing the emergency lane may also endanger their own life should they collide with stalled cars parked there. What does it take to educate such irresponsible drivers other than occasional enforcements? 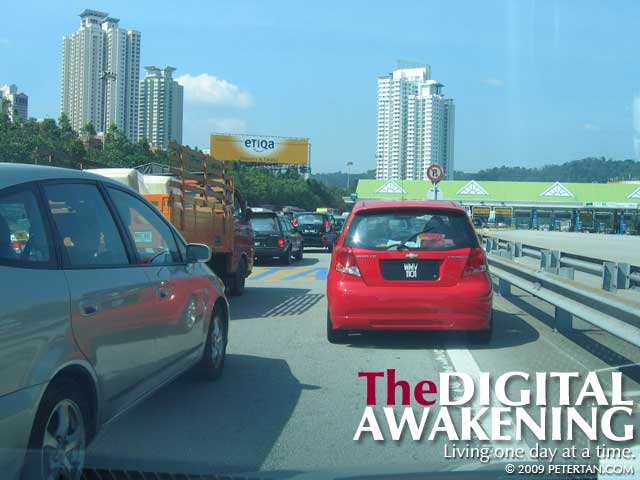 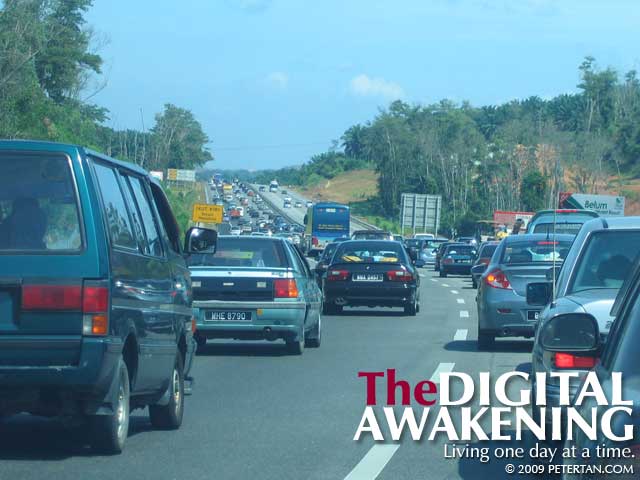 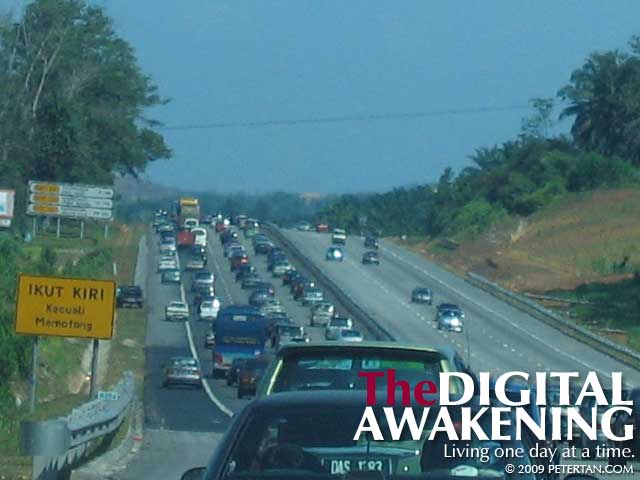 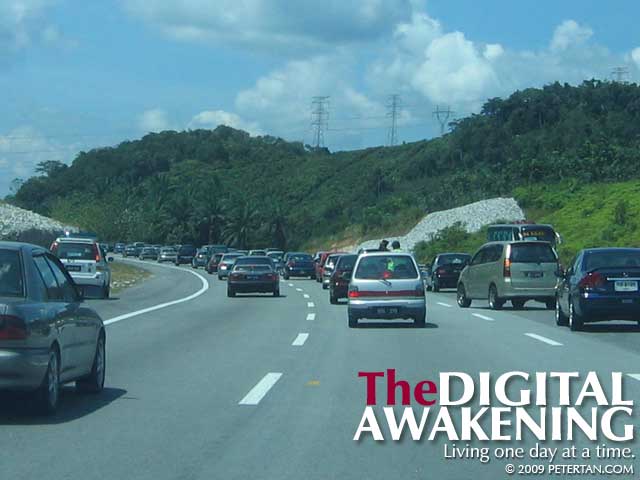 Highway police flagging down a northbound MPV on the right lane.
Photo by Wuan. 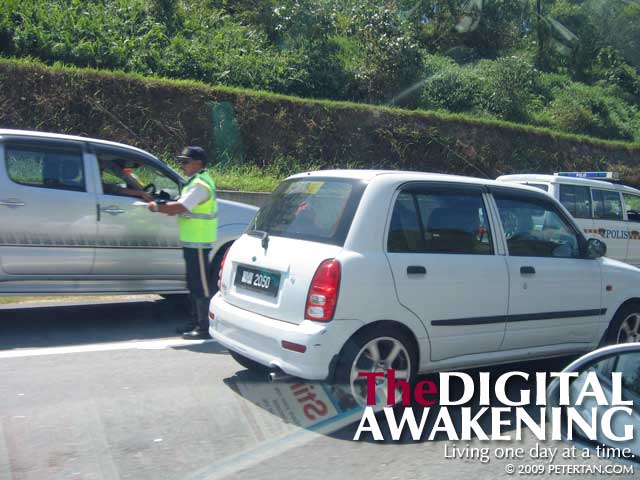 Highway police issuing a summons to a northbound driver.
Photo by Wuan. 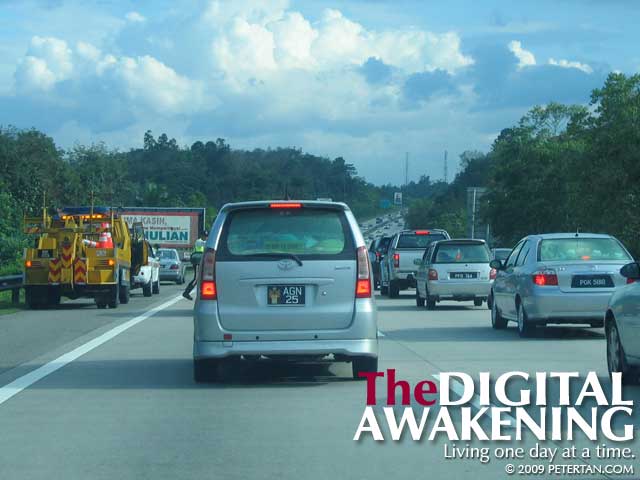 Highway police flagging down a southbound vehicle on our way back to Kuala Lumpur. 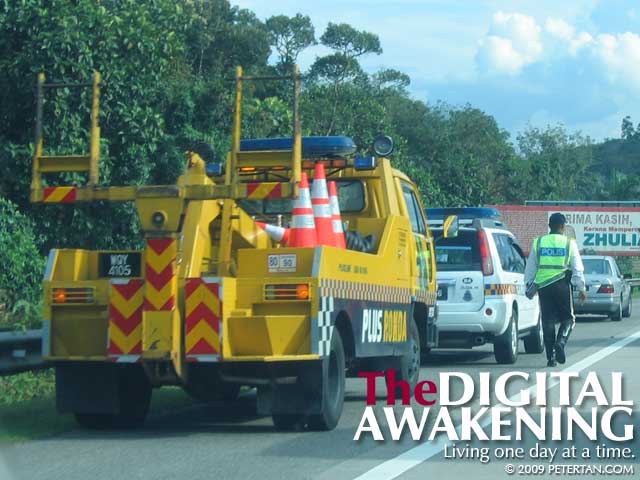 Highway police walking towards a car he flagged down. 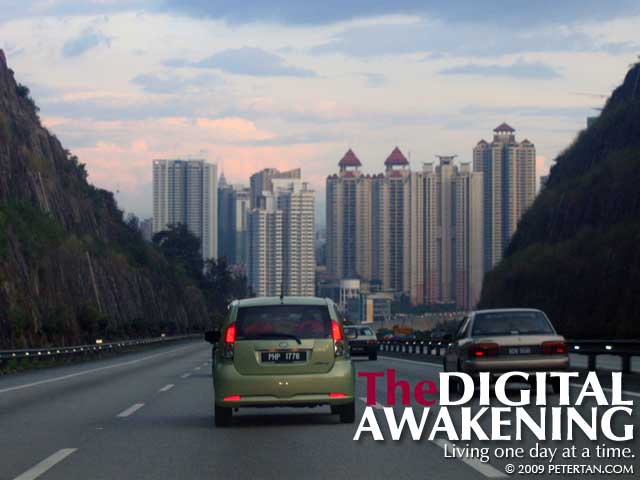 A welcoming sight just before the Jalan Duta toll plaza.

2 thoughts on “Emergency Lane Hoggers Getting Their Just Dessert”