We did not make it to the Ipoh pasar tani (farmers market) after all last Saturday. The front left tyre of the car hit a deep pothole somewhere in Taman Shamelin a short while after we started our journey. Stupid Dewan Bandaraya Kuala Lumpur (DBKL) never bother patch up potholes on the road. There was an obvious swell on the tyre wall. We had to replace it for RM180. That was the second incident with potholes in Kuala Lumpur and the third time the car tyres had to be replaced.

The first time was just a few months after we got the car. It happened at Taman Shamelin just outside Taman Pudu Ulu. There were piles of granite rocks on the roadside for building the perimeter wall for the park. We were following a Toyota Unser. The MPV avoided a rock that was lying in the road. We did not see until it was too late. The tyre was punctured and deflated immediately.

Anyway, we reached Ipoh at 12.30pm, just in time for lunch to celebrate with my father-in-law’s birthday. Before we left Ipoh, we bought some Gunung Rapat hiong piah and then went to Tambum for some pomelos. We left Ipoh at 3.45pm and had expected to reach home just in time for dinner at 6pm. Somewhere along the North-South Expressway (NSE), I saw the road sign indicating exit to Bidor and Teluk Intan.

I have been to Teluk Intan once with my parents a long time ago. It was known as Teluk Anson then. Since we started driving up to Ipoh and Penang, I had wanted to visit this town again but never had the time for it. So when I saw the sign, and there was still a lot of daylight left, I took the exit, thinking that we would drop by for a short while and still make back it in time for dinner.

Little did I realise that Teluk Intan is nowhere off the NSE. We had to drive 40km to 50km through Route 58 to reach the town. Nevertheless, we enjoyed the journey. Kampung houses and durian, rambutan and mangosteen trees lined the road. Then there was a long stretch with oil palm on both sides and nothing else. 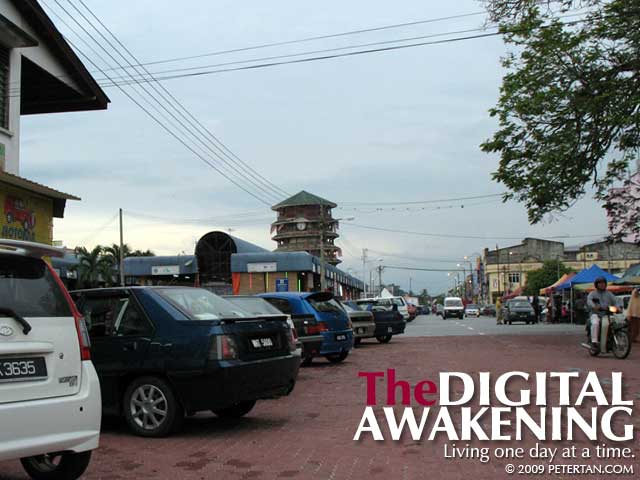 Leaning Tower of Teluk Intan from a distance.

When we reached Teluk Intan, the GPS device provided some confusing directions. We turned it off and circled around for a while before we found a place to park near the tower. The sky was gloomy. It had rained before we arrived. There were puddles on the road. The clock on the tower struck 6.15pm as I was getting out of the car. Canopies for the weekend market surrounded the tower. We did not have an unobstructed view for nice shots. 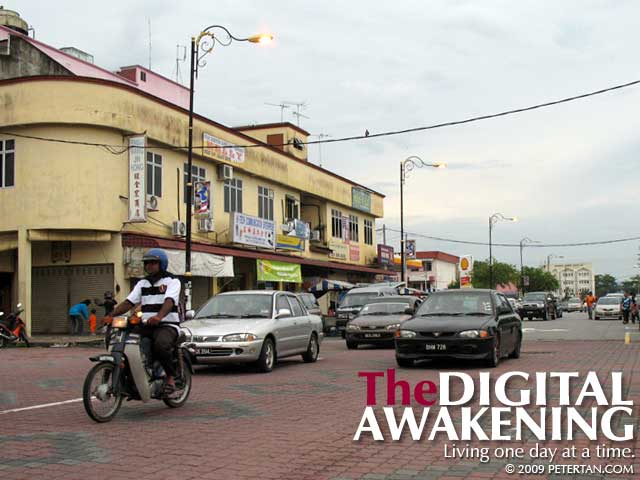 Traffic around the Leaning Tower of Teluk Intan.

Under the canopies were stalls selling colourful jellies, meatballs on skewers, clothes, toys and other knickknacks. A foodcourt offering Malay food was just across the road. Traffic around the area was heavy. A signboard beside the tower provided a brief history and description of this famous landmark. The tower tilted to one side but did not look precarious. It certainly did not look like it would toppled over any time soon. The architecture has heavy Chinese influence as evident from the roof and balustrade. 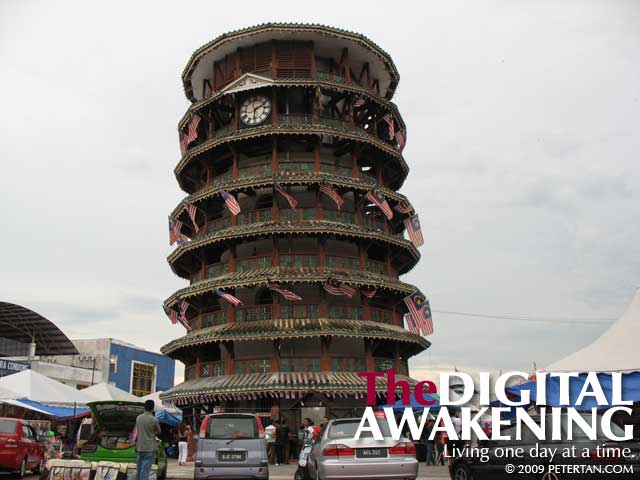 We moved around the plaza where the tower sits on, checking out items on display at the stalls. It was humid. The sky was getting dark. We decided to leave although we would have loved to sample some of the local food. The road out to the NSE was long and narrow. I did not fancy driving along the unlit road in an unfamiliar place. Darkness came quickly nonetheless. 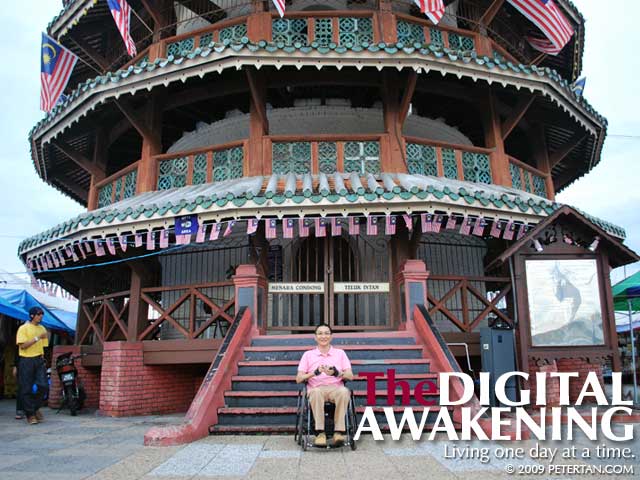 Posing at the entrance to the Leaning Tower of Teluk Intan.
Photo by Wuan.

Halfway out, it was already pitch dark except for the headlights of vehicles and lights from the kampung houses. The GPS device acted up again. It showed that we were off the road but driving parallel to it. It was a great relief when we saw the toll plaza to the NSE. We reached Kuala Lumpur two hours later than we had anticipated. Although it was fun, I am not sure if we want to brave the long drive to Teluk Intan again. 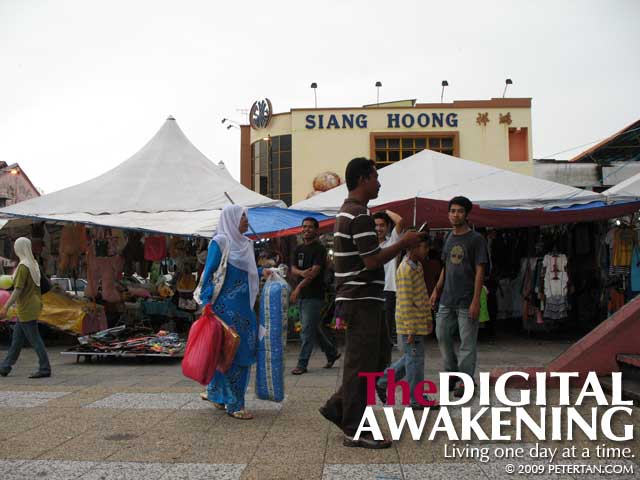 View from beside the Leaning Tower of Teluk Intan. 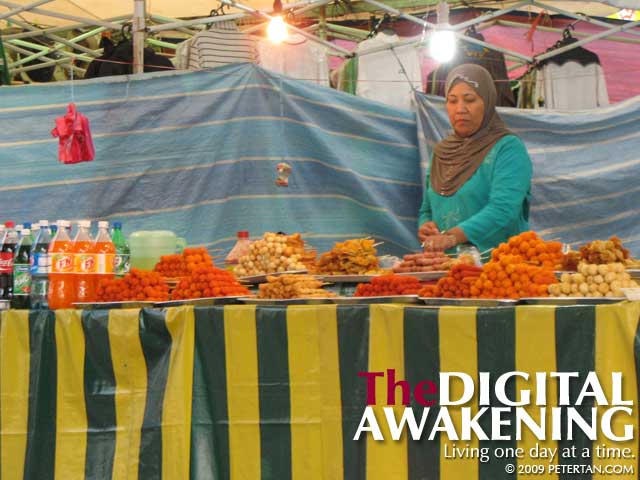 One of the stalls selling skewered meat balls beside the Leaning Tower of Teluk Intan.