It is not often that I come across restaurants that serve food with flavours that my tastebuds wholeheartedly embrace. Good food is hard to find anywhere, be it in Penang, Ipoh or the Klang Valley. Nevertheless, Wuan and I were pleasantly surprised to discover a restaurant near where we live that has never failed to tantallise our our appetite. This restaurant is one of the few that has us going back for more, more of the same and a little more of the good spread available in their extensive menu.

Now, I am not a great fan of fish head noodle. The messiness of picking out the bones always puts me off. Besides that, the fish head noodles in Penang usually came with thick noodles that I did not quite like. I cannot even remember the last time I had it. One day while deciding what to eat in Restoran New Curry at Jusco Taman Maluri, Wuan convinced me to give the fish head noodle there a try. We were already regular patrons there long before that but we usually ordered rice or noodle dishes. 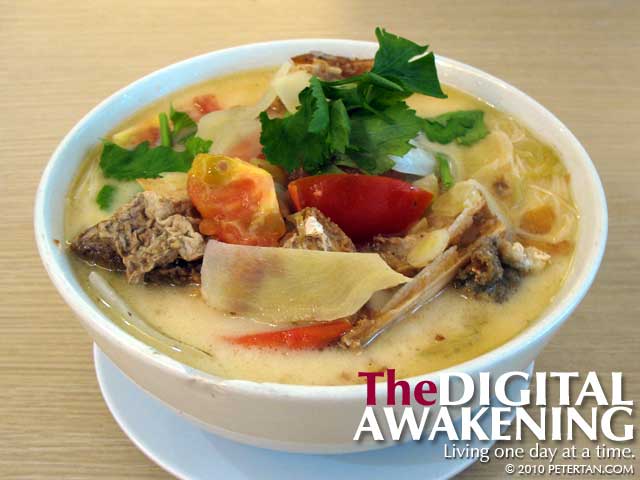 I can still remember when I took in the first spoonful of the murky soup. “This is delicious,” I told Wuan. She agreed. That was the beginning of my gastronomic love affair with the restaurant’s fish head mee hoon soup. We have eaten it inumerable times since. Wuan has also brought home take-away for dinner on many occasions.

Unlike the fish head noodles from Penang which has clear soup, this was creamy sourish and tasty at the same time. The different layers of tastes all complemented each other very well. There is nothing more appetising than starting a meal with a few sips of the warm soup. The deep-fried fish head was generous in portion as were the strips of salted vegetables, Chinese cabbage and ginger slices. The bee hoon was soft but not soggy – done just right. I have tried a few more at different places in the Klang Valley but none came close. 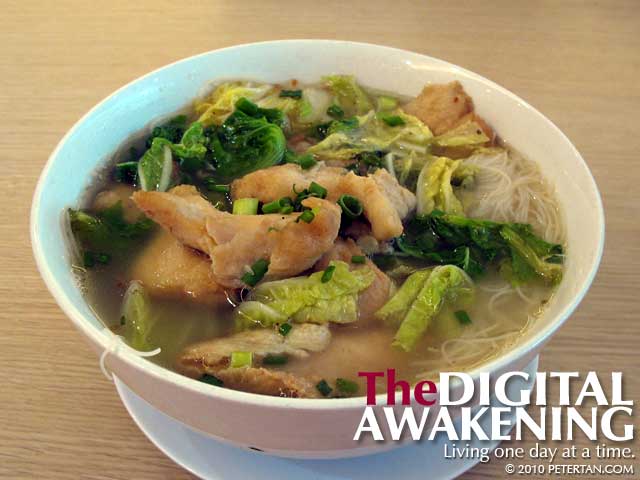 We were there again for lunch yesterday after my medical checkup at UMMC. I wanted something light on the stomach because I had not eaten anything since I woke up. I have never noticed that they have fish fillet with bee hoon soup in the menu and ordered that. Wuan went for the fish head bee hoon soup. That was an unmistakeable choice. We have not been disappointed each time we had that.

My order of fish fillet bee hoon soup was equally as appetising. The fillet was fried. It came in clear soup with lots of Chinese cabbage and the same soft but not soggy bee hoon. The soup was delicious. By the time I was done with the meal, I had finished the entire bowl of soup and the bee hoon but left behind about half of the fillet for Wuan. I had already eaten as much fish as my diet allowed. Food like this makes me wish I could throw caution to the wind and indulge.

At RM9.80 per bowl, the bee hoon soups are not exactly cheap but I reckon that is a reasonable price considering the location and atmosphere. Restoran New Curry’s signature dish is fish head curry. We have eaten that before too. It was creamy but not too much and aromatic. That was also one of the better fish head curries I have tasted. There are also a number of rice and noodle dishes that we like. This is the restaurant that we usually go to whenever we feel like celebrating with a good and hearty meal.