On weekends, Wuan and I would invariably ask each other the same questions: “What to eat?” and “Where to eat?” We often eat out at shopping malls because we spend quite a fair amount of time there for their accessibility and air-conditioned environment. We have eaten at most of the restaurants in those places and have gotten bored with the same food. We wanted to look for new flavours to titillate our taste buds. In the end, we would invariably end up eating at those few shopping malls because we either could not decide on what to eat or were not sure if the restaurants that we wanted to go to elsewhere were accessible. 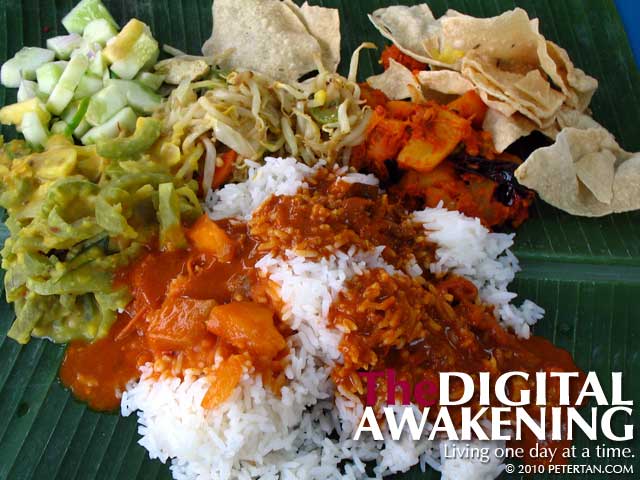 The same happened last Saturday. As we threw the questions back and forth, I suggested banana leaf rice at Restoran Kanna Curry House. The last time we had banana leaf rice was in December last year in Penang. I checked the GPS map for the restaurant’s location. It is just off the Rothman Roundabout. We have never been to the restaurant before although we pass by the roundabout every now and then on our way back from 1 Utama or Ikano Power Centre.

We were not familiar with Section 17 of Petaling Jaya. We got lost even with guidance from the GPS. When we finally found our bearings and found the restaurant, we developed an instant liking for the place. The restaurant was situated on one of two blocks of shophouses on high ground overlooking a road below. The lush clumps of bamboo and mature trees on the slope invoked a sense of serenity. Traffic was light. Parking spaces were ample. There was a police station a few doors from the restaurant at the next block. 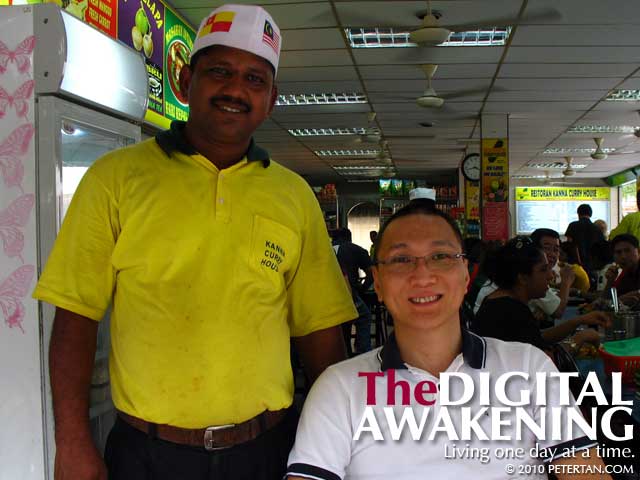 There was a ramp up to the five foot way, a little steep, but Wuan had no problems getting me up and into the restaurant that was abuzz with activity. The waiters busied themselves with taking orders and serving food. We found a table at the back. The weather was humid. The ceiling fans and mist fans made it bearable. Service was prompt and friendly. We ordered two banana leaf rice. The side dishes that we wanted, namely chicken varuval and deep-fried bitter gourd were sold out. Wuan settled for chicken rendang instead.

The atmosphere was lively with a steady stream of customers coming and going. We tucked heartily into our food made more delicious by several types of curry gravy that we kept adding to our rice for that extra spicy flavour. In fact I ate a little too much. Some of the waiters were having their lunch and one of them asked me if I wanted extra rice. I told him I have had enough but he insisted that I should accept the ladleful of rice that he was offering. 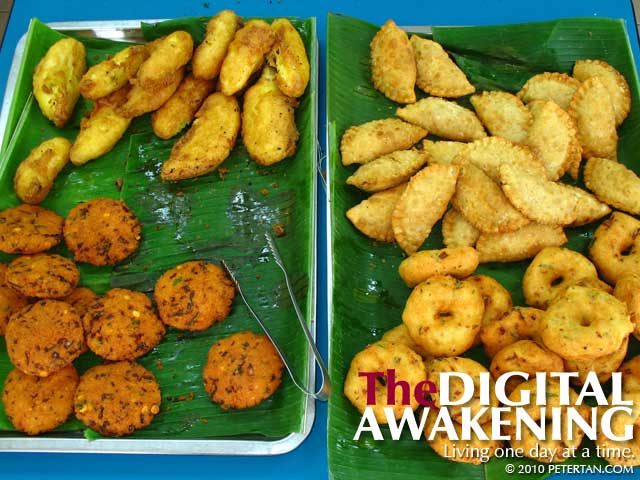 Apart from the food, this restaurant gets extra points for the ramp and friendly service. Banana leaf rice is RM5 per person for as much as one could eat. The price for the side orders and drinks were stated on the signboard. The next time we eat at Kanna Curry House, we want to try the deep fried chicken and fishes as well, and not forgetting the vadais, curry puffs and deep-fried bananas. They looked tempting but we were already too full from just eating the banana leaf rice alone.