On our way up to Ipoh last Saturday, we were caught in crawling traffic at the North-South Expressway about 2km from the Bukit Tagar Interchange. We thought it was a police roadblock. The 30 minutes driving at a snail’s pace on a road with a 110 km/h speed limit certainly felt like an eternity. 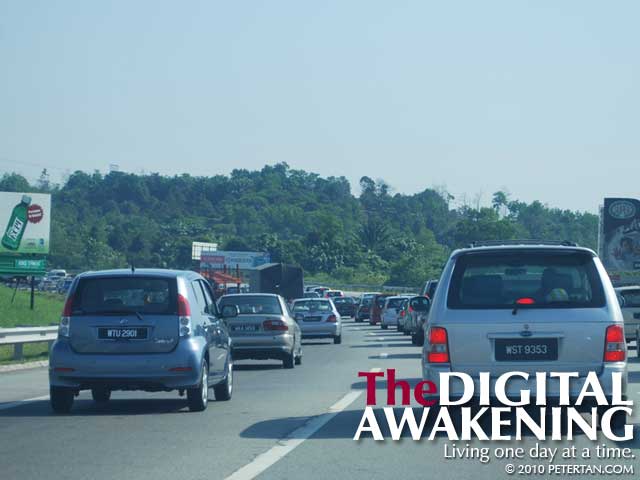 Somewhere before the Bukit Tagar Interchange at the North-South Expressway.
Photo by Wuan.

When we reached the head of the queue, we saw that it was not a road block. Drivers had slowed down to have a better look at the police and PLUS personnels peering down the ravine by the side of the road. The centre and side guardrails on the northbound direction were badly mangled and broken. We guessed that it must have been a very large vehicle to be able to cause such serious damage. Although the scene had been cleaned up, it was still littered with smaller pieces of debris. 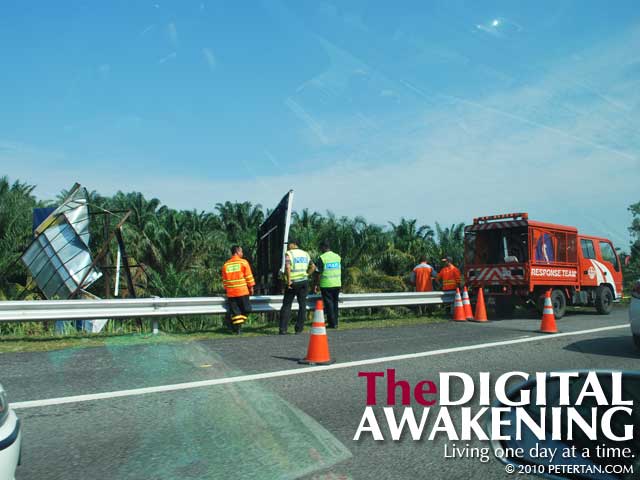 Rescue personnel at the site of the accident.
Photo by Wuan.

It was only when I read the news the next day that I knew what happened.

The following is an excerpt from The Star (June 20, 2010), Five die in separate road accidents:

Che Hussin (Selangor public order and traffic chief) said two members of a family were killed half an hour later, and four others were injured when the car they were travelling in was hit by a tanker coming from across the opposite side of the NSE at Km418 after it lost control.

Roslawati Hassan, 43, and her youngest child, one-year-old Mohd Faiz Haikal, were killed at the scene while her husband and three other children were seriously injured.

The tanker, which was heading south, plunged into a ravine.

The driver, who was pinned to his seat, suffered serious injuries.

The injured were sent to the Sungai Buloh Hospital.

Although driving on the expressway with guardrails separating opposite traffic is safer than driving on state roads, we have to be aware of oncoming traffic. There have been cases of vehicles crashing through the centre guardrails and collide head-on with vehicles on the other side. 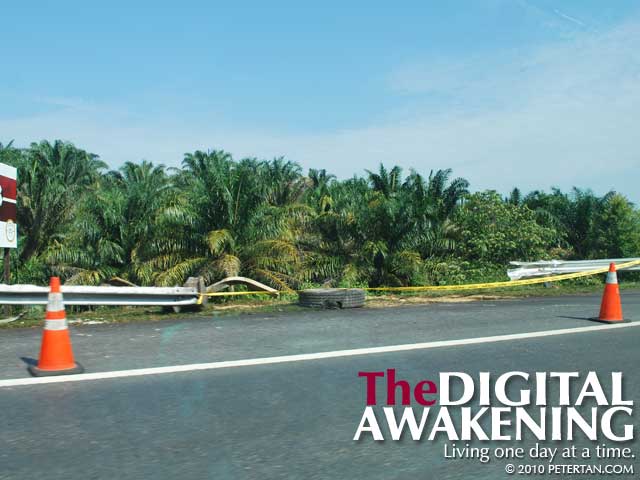 Broken guardrail and a tyre by the ravine.
Photo by Wuan.

I am most cautious with express buses. Many times, I have been overtaken by these heavy vehicles while driving at around 110 km/h. One can imagine how fast they were hurtling down the road when their speed limit on the expressways is 90 km/h only. 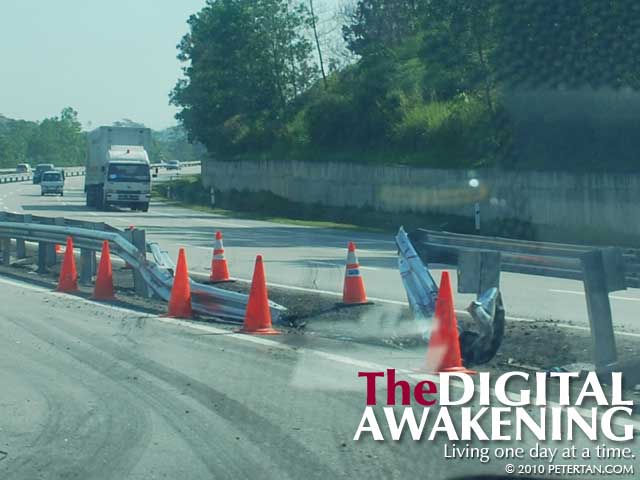 These vehicles, with their mass and number of passengers they carry, will cause the most damage should they be involved with an accident. Drivers of such heavy vehicles who constantly flout the rules should be taken off the road. They are a nuisance and danger to the safety of other road users.