Our flight landed at the Kuching International Airport 25 minutes late as it arrived late at KLIA from Changi earlier. A short while after the aircraft docked, I saw a ground crew lugging my wheelchair up the stairs into the aeroridge. 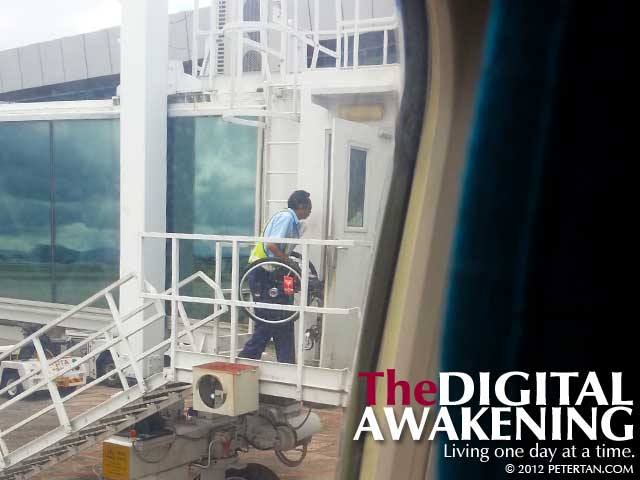 I got off the plane in less than 10 minutes after the last passenger stepped off. It was faster than I had expected. As soon as I transferred to my wheelchair, I checked to see if all parts were intact. I ran my fingers over each and every of the fibre spokes. None were broken. I leaned forward to see if the casters fluttered as I was being pushed to the baggage claim area. They rolled smoothly. Fluttering casters indicate a bent fork or worse, a damaged frame. I breathed a sigh of relief.

We were greeted by the officers from the Jabatan Kebajikan Masyarakat Negeri Sarawak outside the arrival hall. They were there to take us to the Merdeka Palace Hotel & Suites, the venue of the seminar and also our place of accommodation. In the same vehicle with Victor and I were Katsura Oikawa, Chief Advisor on Project to Support Participation of Persons with Disabilities (Phase II) to the Japan International Cooperation Agency (JICA) and Terumi Shikata, JKM-JICA Project Coordinator. We were in the same flight from Kuala Lumpur just now. 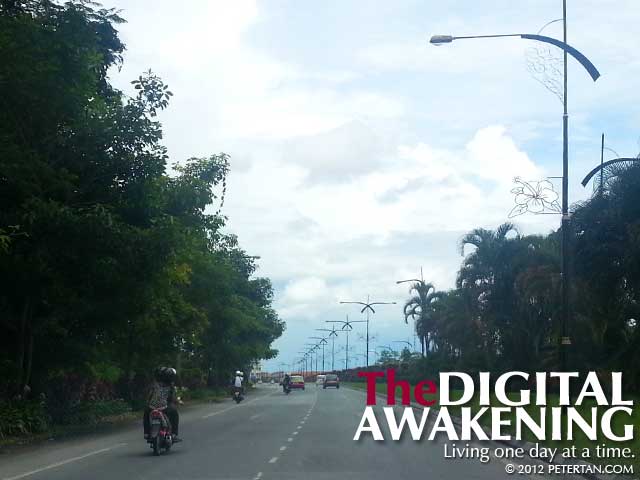 When we got to our room in the hotel I discovered that my wheelchair could barely fit through the bathroom door. I could go in as far as the basin counter only. The toilet bowl blocked the way to the shower area. As I catheterised, I wondered how I could get past the toilet bowl to take a shower. Obviously, that was not an accessible room. 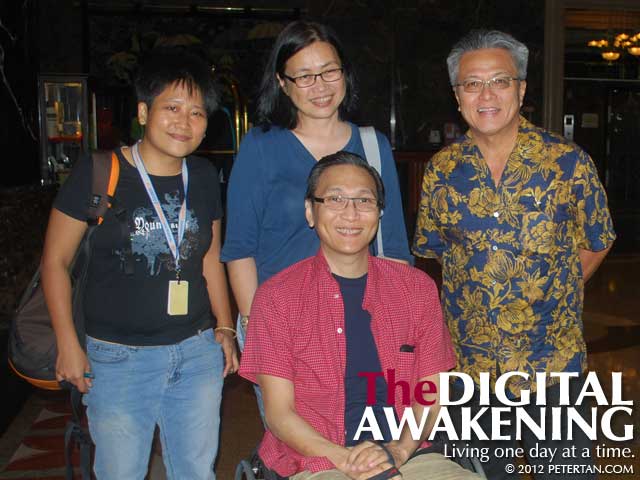 First order of the day in Kuching was a meet up with Phyllis for lunch at the hotel and a press interview at the same time with her colleague Joanna from the Borneo Post. Phyllis got this lovely gift for Wuan, a traditional ceramic bead necklace made by a famous craftswoman of the Lun Bawang tribe in Sarawak. Thank you, Yan! 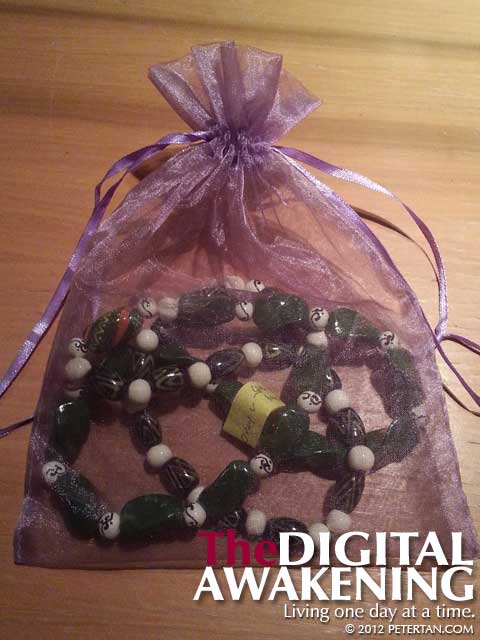 Friends have insisted that I must at least eat laksa and kolo mee while there. The Aurora Court only had the former albeit at an exceptionally inflated price. The Sarawak laksa looked somewhat similar to Penang curry me. Joanna told me that Sarawakians take exception to their laksa being equated with curry mee. The gravy did not taste the same though. The other difference is that the chilli by the side came with calamansi lime. 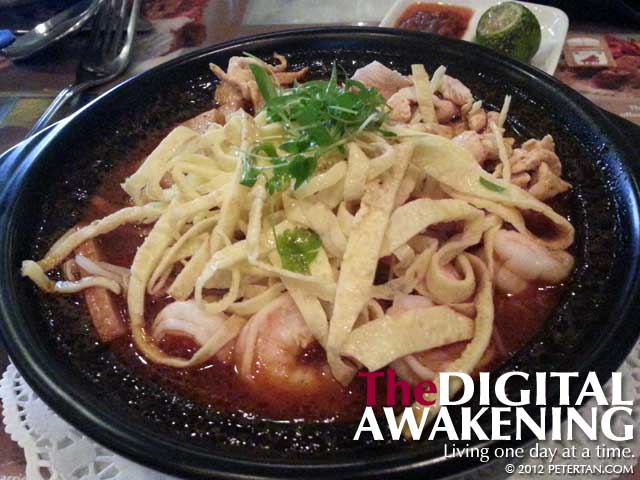 We adjourned to the Seattle Coffee & Tea at the other end of the lobby to continue with our conversation and the interview after lunch. I enjoyed the conversations that the four of us had. We not only talked about disability issue but also the heritage buildings in Malaysia and the people of Kuching and their food.

Victor suggested that we go on a short city tour by car for me to see the sights in Kuching as it would be difficult to move around by wheelchair due to the poor accessibility of the street environment. The concierge hailed a taxi for us, a Toyota Innova, that I struggled to get into due to its high seats. 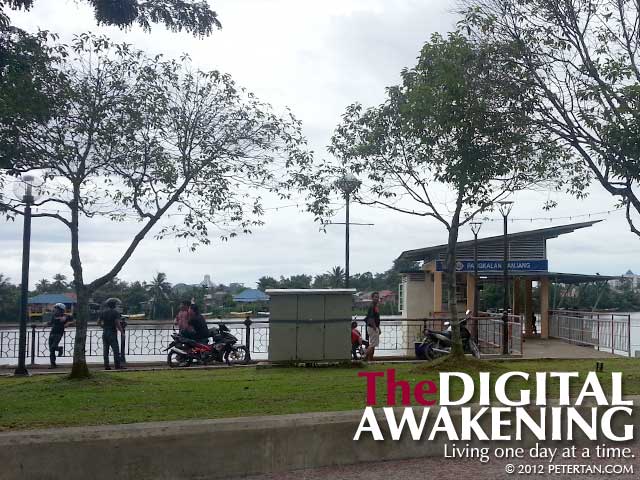 Joanna played tourist guide as she narrated the significance and history of the various buildings and landmarks along the way. I thought the Kuching Waterfront is an interesting place to hangout for watching boats traverse the meandering Santubong River and people going about their activities along both sides of the riverbanks. 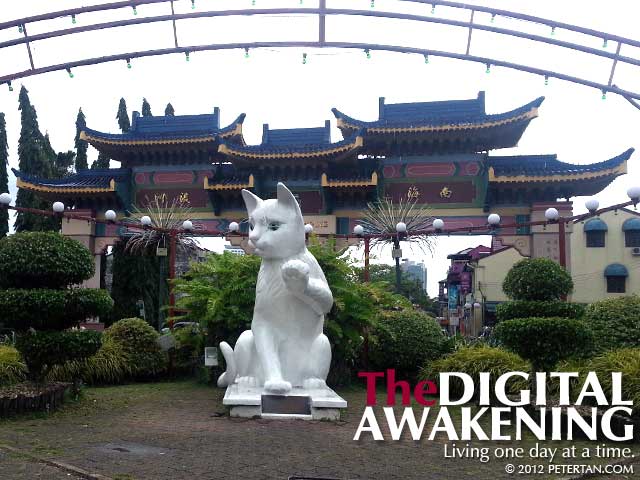 This cat statue at Jalan Padungan will be dressed according to the various festival celebrated.
Photo taken with the Samsung Galaxy S III.

It was said that one has not really visited Kuching if one has not seen the cat statues located at several intersections of main roads in the city. The cat statue at Jalan Padungan, we were told, would be garbed in different ethnic costumes according the the festival of the day. It was just plain white when we visited.

The half-hour tour around Kuching, while enjoyable, revealed that moving around in a wheelchair would be very difficult and dangerous. I was glad we took the easy way by cab. If not, it would have been one struggle after another moving from place to place. Nevertheless, I certainly would like to visit this city again to savour the old world charms and for the food that I did not get the opportunity to savour. Thank you again, Yan, for arranging this wonderful tour at the spur of the moment and for insisting to pay for everything. 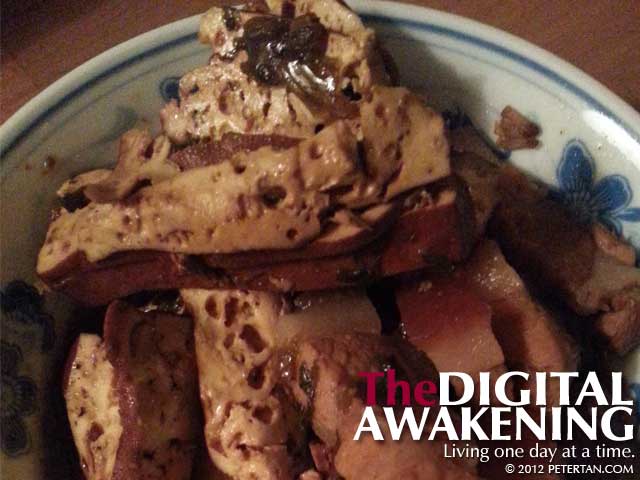 Back at the hotel, after a short rest, Victor got dinner from a popular kuey chap shop nearby. It was different from the kueh chap that I used to eat in Penang. Meat, innards and coagulated blood were braised in a soy sauce gravy. It tasted very similar to tau eu bak. The belly pork I had was tender. I liked it very much, and truth be told, I exceeded my protein quota for the day. 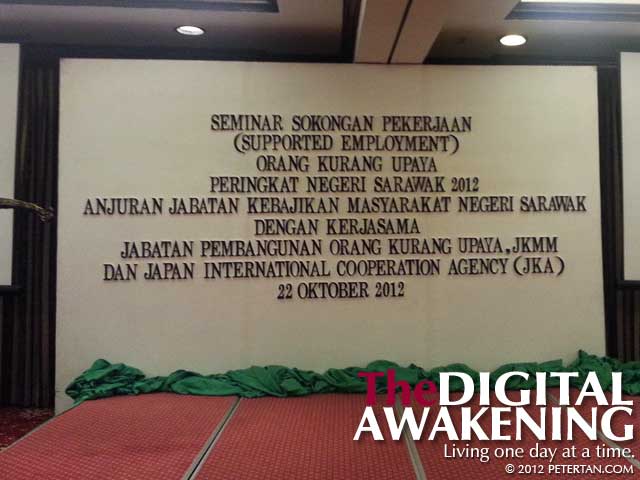 There was a meeting of speakers later in the evening. It was to ensure that our presentations and the equipment would be running smoothly during the seminar. Good thing we did a trial run as the first laptop we used could run stream the videos. The videos running in second laptop did not have sound. After fiddling with the settings for some time, we got everything to run perfectly. I went back to my room and hoped it would work during the seminar as I would be the first speaker for the day. But Murphy’s Law struck when I least expected it the next day.