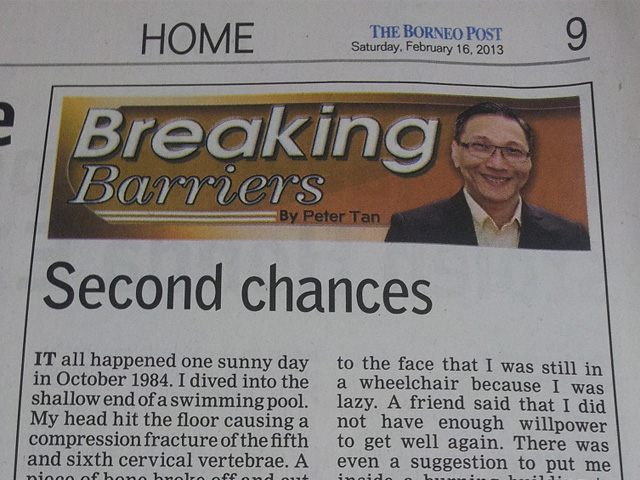 First article for the Breaking Barriers column in The Borneo Post by Peter Tan.
Image courtesy of Phyllis Wong.

IT all happened one sunny day in October 1984. I dived into the shallow end of a swimming pool. My head hit the floor causing a compression fracture of the fifth and sixth cervical vertebrae. A piece of bone broke off and cut into my spinal cord.

Paralysis was instant. I floated face down in the water, unable to stand up or even lift my head above the water to breathe. As my lungs ran out of air, all the things that I have done and images of my parents flashed before my eyes. If not for my classmates who rescued me, I would have drowned.

The full impact of the injury only dawned on me when I was examined at the hospital. There was no sensation from my upper chest down. My arms were weak. I could not move my fingers. I did not know where my legs were.

As my mother was feeding me in the hospital one evening, I wondered if the rest of my life was going to pan out like that, having to depend on her to clean, feed and do everything else for me. What would become of me?

The doctor’s prognosis was depressing. He indicated that there was a very slim chance of me ever being able to walk again. My mother held my limp hand as we openly cried at the great tragedy that had befallen me.

The doctor put me on skull traction for eight weeks. It was to realign my spine. When that failed, I had to undergo a four-hour surgery to remove the bone fragment and have the two vertebrae fused together for strength.

I was 18 then. I was in Form 6. My parents had great plans for me. My father had wanted me to become an electrical engineer. I had no idea what I wanted to be. That tragic accident put paid to whatever ambitions they had for me.

They never once asked me what happened in the pool. Silently, my father blamed himself for the accident. I was given a place in a mainstream school but he made me enrol in a private school. That, he reasoned, allowed me to spend too much time at the swimming pool resulting in the accident.

The doctor sent me home after four months in hospital. Although I regained back some sensation and strength in the limbs, it was not enough to allow me to be independent. My mother had to help me with most of my activities of daily living.

For five years, I underwent intensive physiotherapy and exercised hard at home, hoping against hope that I could walk again. When that did not work out, I resigned myself to the fate that I would remain in the helpless condition I was in, always having to depend on other people even for the simplest of tasks.

One relative told me straight to the face that I was still in a wheelchair because I was lazy. A friend said that I did not have enough willpower to get well again. There was even a suggestion to put me inside a burning building to literally make me stand up and run for my life: “just like in the movies”.

Perhaps, they were right. If I had put in more effort, I really could be walking again. I really wanted to try harder but my body could not take it any more. My back and right knee were already injured from overexertion.

After my mother passed away, I had a domestic helper to cook, clean and do laundry. When she left two years later, I attempted to live by myself. It was hard work even though I had occasional help from the neighbours.

Cooking took up most of my time. I practically did not have the strength to do anything else after I had cleaned up. That was the most trying time of my life.

In 2005, a couple of disabled friends suggested that I attend an Independent Living Programme workshop organised by the Welfare Department and the Japan International Cooperation Agency.

I thought I could finally learn how to perform household chores and live by myself more efficiently. To my disappointment, the workshop taught none of those skills. However, the two disabled resources persons from Japan opened up my mind to a totally different meaning of independent living.

I was selected to undergo further training in Tokyo after that workshop. The two weeks in Japan gave me a deep insight into how disabled people there live a dignified and productive life.

They have personal assistants providing the necessary support for their activities of daily living which include toileting, cooking, feeding, household chores and even assistance at work.

Together with a very accessible built environment and public transport system, even the most severely impaired persons were able to lead a fulfilling life, be gainfully employed and realise full participation in society.

That experience changed my misconception that being in a wheelchair was condemnation to a life of misery. From seeing myself as a helpless person, I turned into a change agent, working with other disabled activists to influence society to be more inclusive.

After more than two decades of trials and tribulations, at the age of 40, I finally discovered what I want to be! And I invite you to take this journey with me to make Malaysia, and the world for that matter, a better place for everyone. 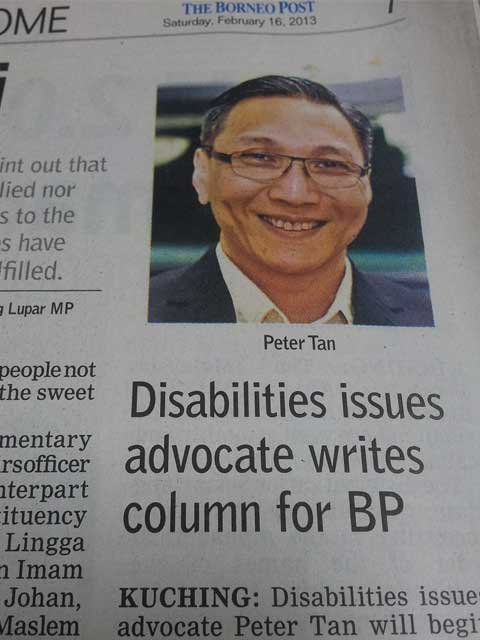 Titled ‘Breaking Barriers’, Tan will share his experiences of having sustained a spinal cord injury at the age of 18 and life since.

He will also use the column to educate readers on disability issues as well as advocating for the rights of the disabled.

Tan has a blog called ‘The Digital Awakening’ at www.petertan.com and facilitates as a senior disability equality training (DET) trainer through public seminars and workshops.

The training seeks to transform society’s entrenched attitudes and misconceptions about people with disabilities (PWDs) towards a more inclusive community for all.

During a seminar in Kuching last year, Tan told participants from non-governmental organisations (NGOs), private sector and government agencies that PWDs are created when people with impairments experience disabling factors in society or the environment they live in.

While recognising the importance of rehabilitation for PWDs, Tan believes that it is ultimately more beneficial for society as a whole to remove physical, mental, attitudinal and environmental barriers and empower PWDs to participate fully as active, productive and equal members of society.

Born in Penang, Tan has travelled around Malaysia and to Japan and Thailand for training as a peer counsellor for the Independent Living Programme for People with Disabilities.

This project is supported by the Welfare Department and Japan International Cooperation Agency to empower severely disabled persons to live independently in the community through self-respect, self-determination and social reformation.

In 2007, he was a speaker at the 7th World Assembly of Disabled Peoples’ International and Global Summit on Independent Living in Seoul, South Korea.

Tan currently resides in Kuala Lumpur with his loving wife and their pampered cats.

He is also a passionate amateur photographer and food aficionado.

Link to the article: http://www.theborneopost.com/2013/02/16/disabilities-issues-advocate-writes-column-for-bp/