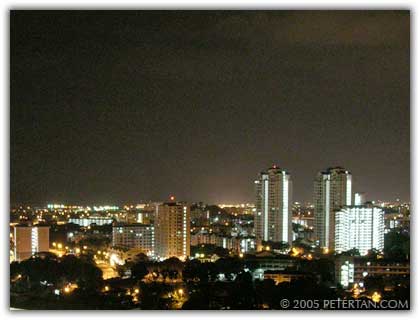 Night panorama from my window – 0411hrs.

It is common to hear the wailing of sirens here. The apartments are close to the main road of Jalan Bukit Gambir. After six years, I have gotten used to it. It does not bother me much. But this morning, one after another came blaring. The first thing that crossed my mind was something big must be happening.

Still groggy from sleep, I listened, my eyes closed. That sounded more like the sirens of a fire engine than an ambulance. It was getting too close for comfort. With the ineffective security guards here, I thought I better get up to see what the situation was. I did not want to be caught dead with only a sarong and nothing else should I need to evacuate. I groped in the darkness and finally got onto my wheelchair.

Looking out the window, I saw the flashing blue and red of a fire engine racing into the Taman Pekaka housing estate. It then made a left turn and stopped at the five storey flats. It was quite a distance from where I was and I could not see very clearly in the darkness. I looked at the clock. It was already 0400. Since I was already up, I thought it was a good idea to snap a few shots of the night panorama. The fire engines left a while later. It must have been a minor fire only. I went back to bed and woke up at 1100 this morning.

Mack Zulkifli of Brand New Malaysian has taken up the issue of the building manager’s refusal to draw up a contingency plan for the 4 blocks of apartment where I stay in his entry titled Malaysia Service Desk -Lost and Found announcement. Blocks 31A, B, C & D of Taman Pekaka consists of 544 units of which 504 units are contained in three 22-storey blocks and another forty units in a 5-storey block.

Several fires have broken out in some of the apartments. Fortunately they were extinguished quickly with only minor damages within the respective units concerned. After the last fire at the apartment one floor below mine, I wrote a letter to the building manager and blogged about it here. I am pasting it here again for context.

BLOCK 31A, B, C & D CONTINGENCY PLAN FOR FIRE AND EMERGENCIES

If you do not already know, a fire broke out at 31B-19-4 today at approximately 2:25pm. The guardhouse was promptly notified. I am extremely disappointed that the guards arrived at the scene of the incident only after the fire was extinguished. At the first instance when a fire is reported, the security guard posted at the respective Blocks should take control of the situation. If your security guards were not trained in fire fighting, then they should have been instructed to notify residents staying in the immediate vicinity and if the situation warrants, evacuate them in an orderly manner. None of these were done. Lives were at stake and your security guards were acting in a lackadaisical attitude which is truly appalling.

As the Manager of the four blocks of apartment here, it is your responsibility to ensure the security and safety of all residents at all times. I would like to know what contingency plans you have in the event of a major fire or emergencies. Surely, for the amount of management fees and security guard fees that are being charged to the management fund every month, you must have already drawn up a strategy to ensure the safety of residents here.

In addition, despite protests from parcel owners, you have been grossly irresponsible in continuing to allow cars to be parked at the driveway in such a manner that they will obstruct the movement of fire engines and ambulances. This will seriously impede rescue and fire fighting attempts. Are you going to wait until lives are lost because of these obstructions before you are ready to consider the safety of residents?

I trust you will furnish all parcel owners and residents here with a copy of the Contingency Plan for Fire and Emergencies within fourteen days to see if any amendment is needed. This will allow us to reside here with a peace of mind knowing that our safety and security is being looked after. However, if there is no such plan, I urge you to immediately initiate a dialogue with parcel owners and put together one for the safety of all residents here.

We have experienced two earthquakes and several minor fires here but the building manager has yet to draw up a contingency plan nor hold a dialogue with the unit proprietors here to get feedback and suggestion on what steps to take in the event of a major emergency. In between that period the nozzles and couplings for the fire hoses on many floors were stolen due to the lack of security. The missing items were recently replaced and the costs charged into the management fund.

There are other major issues and disputes with the building manager who is also the developer that is being looked into by the Residents Association. I understand that those issues have been escalated to the Pengarah Jabatan Tanah dan Galian and the Secretary of the MPPP and they are looking into our grouses and problems. We are currently waiting for the issuance of the strata titles for our respective units. Hopefully when we get the title and form the management corporation, the unit proprietors and residents here can see better days because we will then have the right to determine the management of this place that we have come to call home.

I sincerely thank Mack for taking a personal interest in this issue. His concern has really touched me. We have not met in real life apart from chatting online a few times. I have met a lot of people who took a cursory interest in my plight but Mack is one of those few who is making it a crusade to see that my concerns and problems will be properly addressed. Thank you again Mack. The underprivileged and the underdogs need more people like you. 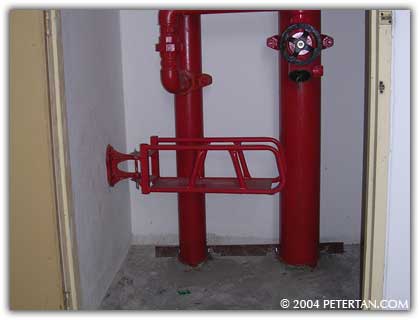 Where in the world are the fire hoses?

This photo of the wet riser at Level 20 of my apartment block was taken at 3:26pm just now. Previously, the discovery of missing nozzles and couplings of many fire hoses was blogged here. Now the fire hoses are missing as well. I want the Developer/Management Corporation of Block 31A, B, C & D of Taman Pekaka to enlighten me on what the firemen are supposed to use to extinguish a fire should a major one occur in one of the apartments on my floor right now. 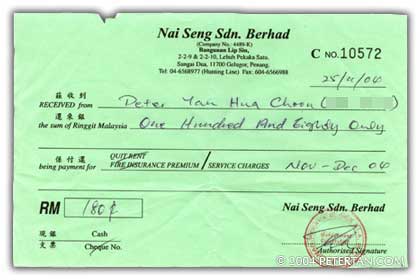 This receipt for the monthly service charges was issued by the Developer who is also acting as the Management Corporation. Each of the 544 units here pays RM90 monthly. This is used to pay utility bills, security and cleaning services, and other general maintenance services.

Follow this and this for previous entries on the same issue of fire safety at the apartment blocks where I am staying.