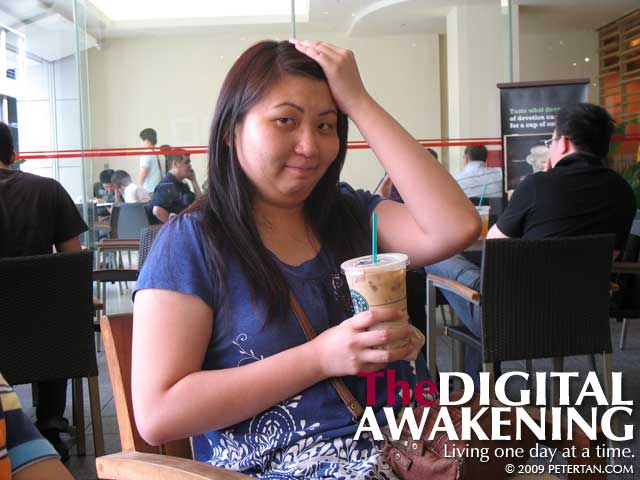 It is Earth Hour and the living room light is on. Yawn. I am supposed to be preparing for a presentation for tomorrow but here I am blogging about the Old Fart Bloggers Meet at Starbucks at The Gardens Mid Valley this afternoon. This meet was organised by Dustyhawk to get some of the veteran bloggers to chill out together. 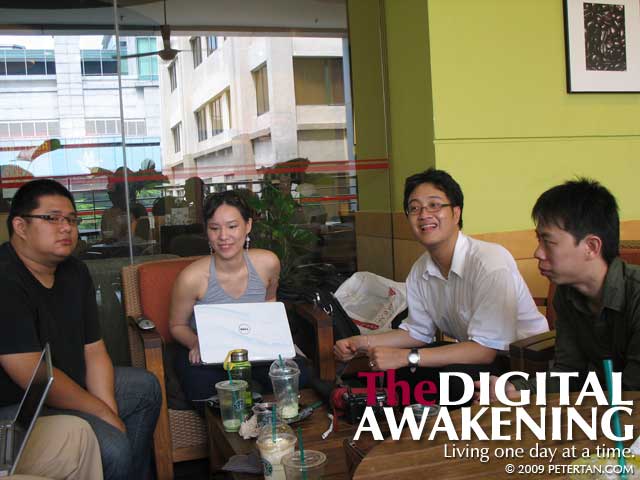 Wuan and I arrived just before the appointed time. Dustyhawk, Jason Mumbles and April Pole Dancing Queen were already there. Suanie came a while later with KY. The rest who came after that were (not in chronological order as an old fart blogger like me has poor memory) Eyeris, Redzuan dj PhutureCybersonique, Thomas, Albert Glaring Notebook, Fazri Silencers and FireAngel. 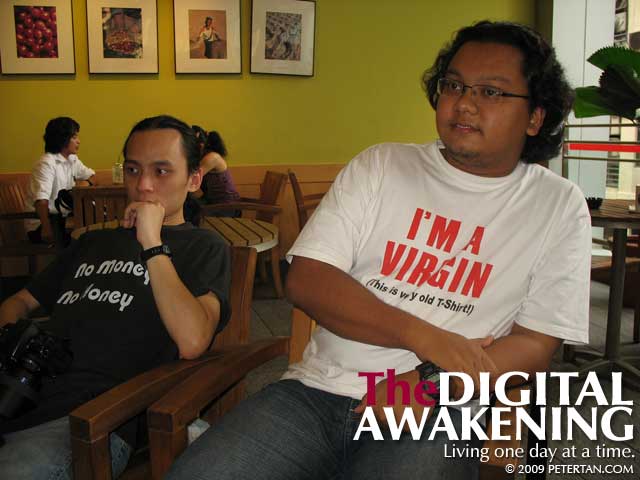 Albert No Money No Honey and Fazri the Virgin.

Chilled out we did, talking about the change of ownership of Project Petaling Street (PPS) among others. Most of us met through organising bloggers meets through PPS. The first bloggers meet that I organised and met other bloggers was way back in January 2005. No doubt it was a small gathering, it was fun meeting some of the bloggers again, some of whom I have not met for a couple of years already. Great work Dustyhawk. Woops, Earth Hour is almost over. That is my cue to end this entry.

BLOGGERS gathered for a day of networking and sharing at the second All Malaysian Bloggers Project (AMBP) jointly organised by The Star Online and Cinema Online recently.

The project was aimed at providing bloggers in Malaysia a platform to share their thoughts at a get-together instead of just via online communication.

“We started off as a pilot project sometime last year but things kicked off in January. We changed the look of our website and a lot of sponsors began coming in.
Giving his views: Tan (in wheelchair)sharing his thoughts about blogging on disability issues.

“Today, we have more than 2,000 bloggers from all over Malaysia registered with us,” said Fredericks during the gathering at the Outpost Café in Cathay Cineleisure in Mutiara Damansara, Petaling Jaya.

He said the first gathering that was held at The Gardens in MidValley had been a more informal meet.

Aizaruddin said he had been blogging since 2001, long before blogs became popular.

“Project Petaling Street (PPS) was started in 2003, and we celebrated our blog’s fifth anniversary on June 5. We have over 9,700 members registered with us,” added Aizaruddin.

He said any blogger could inform PPS to highlight it in its blog.
Perks: Low said the perks that came with blogging included getting to try products and services for her reviews.

“In short, it’s like a snapshot for people to see what it is going on in the Malaysian blogosphere.

“It’s convenient and easy for those of us who are lazy to surf what others are writing about in other blog sites.”

Tan spoke on how blogging helped him advocate effectively a cause he believed in – the rights of disabled people.

“The public don’t really see many of the disabled people in the city because the environment and public transport is not made accessible to them,” said Tan, a disabled person himself.

“I know of airlines that don’t accept the disabled.

“Those that do, meanwhile, require us to sign indemnity forms whereby we cannot sue the airline in the event the craft crashes or some other untoward incident occurs.

“Why the need for such conditions when disabled people pay the same airfare as everyone else?” he asked.

Tan said blogging allowed him to disseminate information with ease and reach out to people who were in the dark about disabled issues, as not many reports on this could be found in the mainstream media.

“It also provides unlimited space for us to give more radical views about a certain situation which is sometimes not reported in the mainstream media,” he added.

Low said she loved the perk of being able to forge friendships quickly, and getting to sample different products for reviews.

“I feel your personality shines through when you blog. It’s exciting to have a voice and be able to draw people to listen to you!

“The power of blogging can actually evoke thoughts and influence people to discuss a topic that you have written,” said Low.

She however, feels that blogs should never be used as an avenue to make baseless claims or to cause harm to people.

Cinema Online editor Chin Vin Sen and Rohan Thomas of Microsoft, which was one of the sponsors of the event, were also present to share tips about usage of popular social networking website Facebook. 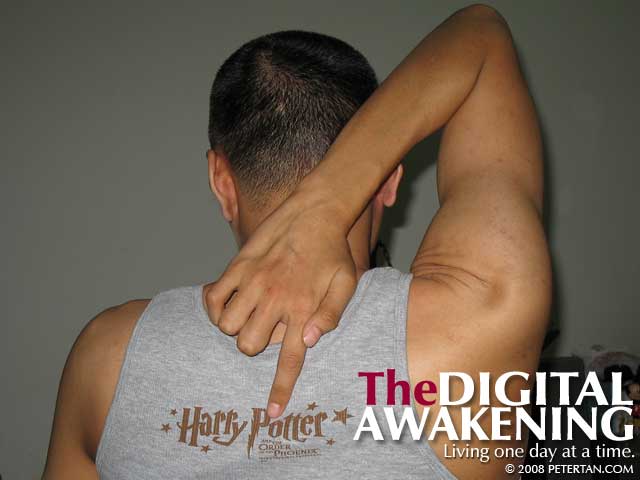 I went to the AMBP Bloggers Gathering and all I got was this lousy Harry Porter singlet for ladies (but look at that deltoid!), two movie tickets that I could not use as it was for a weekday show and a Bee Movie toothbrush holder. Those came in the lucky draw goody bag that I won.

Wuan and I were the very last few of fifty people to get the free drinks voucher courtesy of Starbucks although we were one hour late. I had Mocha Frappucino which is taboo food to me while Wuan had Rooibos Herbal Tea Latte which tasted quite nice actually. Met up with some old friends like Redzuan aka DJ Phuturecybersonique aka Mr. Pot Cit, Sashi of Sashi Syok Sama Siti Mix fame and Suanie who missed me so much that she called to check if I was really going to the gathering.

Kudos to the gang at AMBP for organisng this gathering, especially Mike, Sashi, Ivy, Andy and whoever else was involved. I look forward to more events with targeted themes to keep the younger and restless participants occupied. As for me, I will be contented with just sitting in a corner and soak in the ambience. Anyway, well done guys! And one last thing, better prizes for the lucky draws for subsequent events perhaps?