I cannot but have to admit that I am getting on in age. Every now and then my will body ache. I am currently experiencing a deep numb pain in the back of my left shoulder. It cannot be pinpointed to a specific spot and is causing me much discomfort for the past hour. Old people call it hong sip or fung sup, meaning wind and dampness.

This malady is attributed to wind and dampness getting into the body from constant contact with water, especially the from the habit of bathing after sunset. The other causes are believed to be contributed by injuries such as sprains that are left untreated and not adhering to taboos during confinement for women.

I am not aware if there is a cure for this as I have been living with it for as long as I can remember. My bad right knee also acts up like this once in a while. The only temporary relief that I can get is by massaging the aching spots with with hong eu that my paternal grandmother used to make and sell. She was a midwife back in the middle of the last century. Grandma passed away in the early 1980s when she was in her eighties. Sixth uncle took over the production after she passed away. Now that uncle has also passed away. I do not know where else I can get it.

Hong eu means wind oil. It is believed to dispel wind and dampness from the body. This is accomplished by massaging it onto the aching spots. The body part is then kept warm with bandages. Grandma used to have this huge kuali outside her house for making the hong eu. She would buy fresh and dried herbs and simmered it in coconut oil for several days until the concoction became thick and dark like soya sauce. It was then bottled and sold in sundry shops and Chinese medical halls all over Penang. The label pasted on the bottle had a pink background with the logo of a one-humped camel. The blue-coloured Chinese characters indicated what it could be used for.

Grandma’s hong eu worked. I can vouch for it. It had eased the aches on my bad knee many times. However, its coconut oil base made it greasy. Anything that came into contact with it became greasy too. That included bedsheets and clothes as it was advisable to apply it before bedtime for its its magic to work even more. The pungence of the herbs was another turn off. One cannot bathe after applying it as after massaging, the pores in the skin are opened and may absorb even more wind and dampness. This will aggravate the condition. That was the reason why I used it very sparingly and only when I absolutely had to.

Mum once recounted how she had used the hong eu to stop bleeding. An Indian coconut plucker had accidentally cut a deep gash on his hand and was bleeding profusely. Mum quickly poured the hong eu on a piece of gauze and wrapped it around his wound. The bleeding stopped a short while later. The wound healed in no time and he was soon back to plucking coconuts again.

The hong eu was also effective in dispelling wind in the tummy of babies. Babies with flatulance will cry incessantly. I have heard Mum advising new parents to gently massage the hong eu on the tummy for relief. Another method is to apply the hong eu onto a piece of betel leaf and heat it over charcoal embers. The warm leaf is then placed on the baby’s tummy, ensuring that the navel is covered as well. And the baby would stop crying and get well soon after. Such was the efficacy of my grandma’s hong eu.

How can I not feel old when, in addition to my bodily aches, I can dispense such traditional old wives treatments that only people of my grandma’s and Mum’s generations knew of? Nevertheless, there are benefits to my aches. They are good for forecasting the weather. I can predict with 98% accuracy that it will rain within 48 hours when the aches attack. This is a skill only people with hong sip possess. You can be sure that I will not be caught unprepared on rainy days. As I am typing this now, the ache on my shoulder has disappeared only to be replaced by an ache on the bad knee. There is no doubt it will rain soon. Anybody want to place a wager against that?

Note:
This entry makes it my one thousandth post in this blog that just celebrated its fifth anniversary two weeks ago. 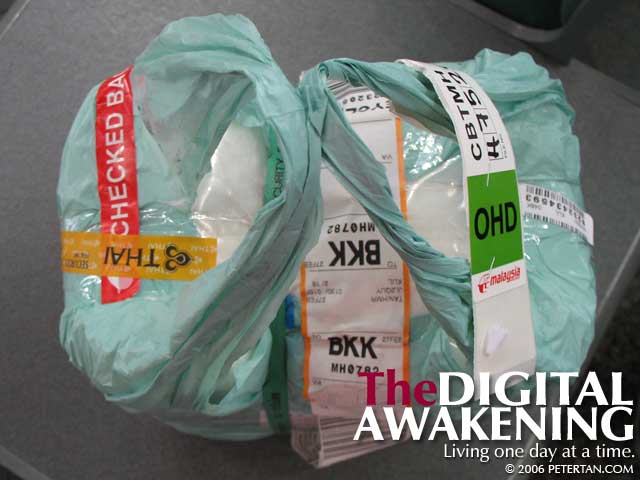 The pack of diapers after we claimed it from the Malaysia Airlines Lost and Found Office at KLIA.

This pack of adult diapers decided to play hide and seek at Bangkok International Airport when I was there for training in March. The Lost and Found Office could not find it when I lodged a report. It was annoying to be in a foreign city without diapers. Fortunately, they were easily available at convenience stores. 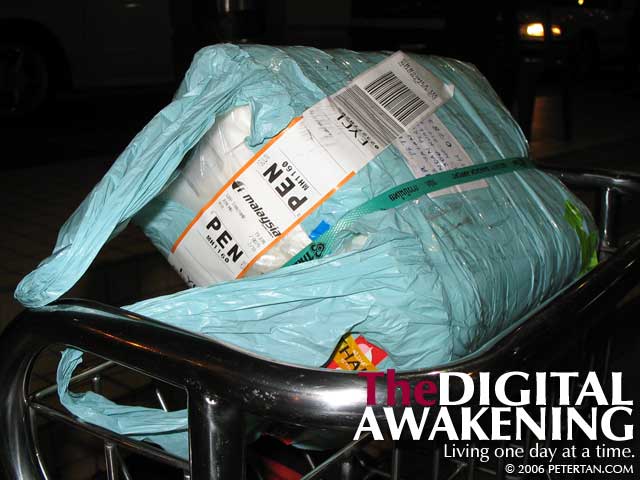 At the Penang International Airport.

I had given them up for good after I got back to Kuala Lumpur as they cost slightly over RM20 only. I was therefore pleasantly surprised when Malaysia Airlines called in April to inform me that I had an unclaimed item that was sent back from Bangkok. They would keep it for three months before disposing it 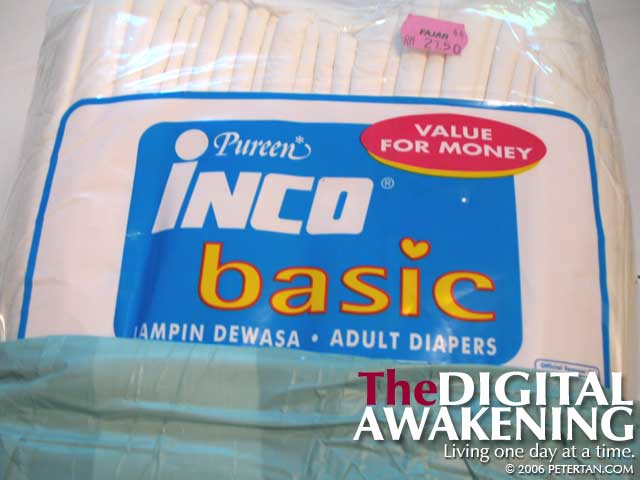 When Wuan and I was at the Kuala Lumpur International Airport to catch our flight to Penang on Monday, we went to claim it. The officer at the Lost and Found Office could not believe that it was only a pack of diapers when he caught sight of the label. It was a hassle lugging it into the plane with us. We checked it in at the counter, hoping that it would arrive safely at Penang with us. It did.