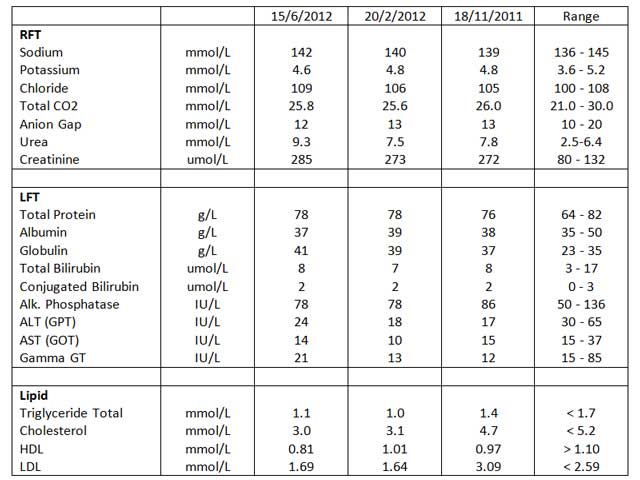 Serum creatinine went up slightly but still within range. Urea level spiked from 7.5 mmol/L in February to 9.3 mmol/L. It must be the fried anchovies that I have been indulging on a little too much of late. Need to cut down on that together with spinach and oatmeal. Otherwise, the doctor was not too concerned with the results and scheduled me for the next check up in six months instead of the usual quarterly. The consultation at the uropathy clinic in March also did not see the urgency for me to get a urodynamic test done as the blood tests have shown that the condition of my kidneys have somewhat stabilised at current levels. All is well, for now, and this gives me some leeway to enjoy some durians and hawker food when I am in Penang later this week.

The chronic kidney disease has curbed my enthusiasm for good food since I was diagnosed with it in 2004. Mr. Liong, the urologist at Lam Wah Ee Hospital in Penang, gave me an advice that I remembered till today, that I should take good care of my failing kidneys, which if not, would cause a lot of undue hardship to my family when they fail totally and I need to go for dialysis. I took that advice to heart and have been keeping to a strict renal-friendly low-protein, low-sodium and practically low-everything to keep the decline in check.

I pride myself for adhering to having just two matchbox sized portions of meat daily most of the time. I also scrutinise the mineral contents in the food that I eat. As hard as I try, there have been occasions that I allowed temptation to get the better of me with the notion that I should reward myself with some taboo food for depriving myself for so long. So, I would tuck in the food and savour every mouthful like it was my last meal. Food never tasted so good.

And as always, inevitably, the moment I put down the cutlery, I would ask myself if I over-indulged. Did I eat more meat than I should? Was that gravy a tad too salty? I would regret even more should I start to itch and had to take anti-histamine tablets. I did say I stuck to the low-protein diet most of the time. Those other time I did not, I would be trouble over a period of time wondering if I overloaded my kidneys and tipped them over the edge.

I am writing this post because I have a scheduled blood extraction together with an ultrasound of the kidneys, ureters and bladder on Friday, and I am troubled by the few times I ate more than I was allowed to or did not catheterise as often as I should have. This is the same emotional cycle that I go through every time I have to go for blood tests and ultrasound. It would persist until I get the test result when during the scheduled medical appointment two weeks later.

The needles no longer give me the jitters anymore. It could be that I have become hardened to the pain or the phlebotomists (individuals trained to draw blood samples for medical testing) that I encountered were very good at what they do. I used to turn my face away to avoid seeing the needle going into the skin. Now, I watch the entire blood extraction process. 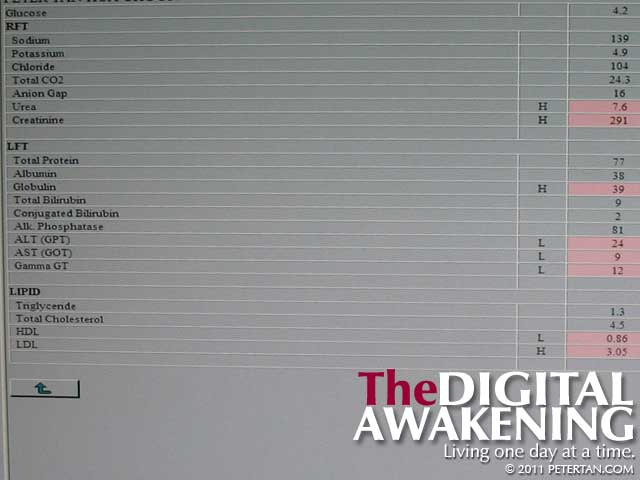 I went for a blood test last Friday and then for the scheduled appointment at the UMMC spinal rehab clinic on Wednesday. Serum creatinine has gone up a little to 291 umol/L, nothing to be unduly worried about as it has been hovering around this level for a while now. On the other hand, the low-density lipoprotein level is above normal at 3.09 mmol/L.

The doctor advised me to watch my diet. Admittedly, I have been rather reckless with what I eat lately. I am scheduled for another blood test in November and also a KUB (kidneys-ureters-bladder) ultrasound at the same time. Hopefully, by going on a healthier diet now, the results then will be more favourable.