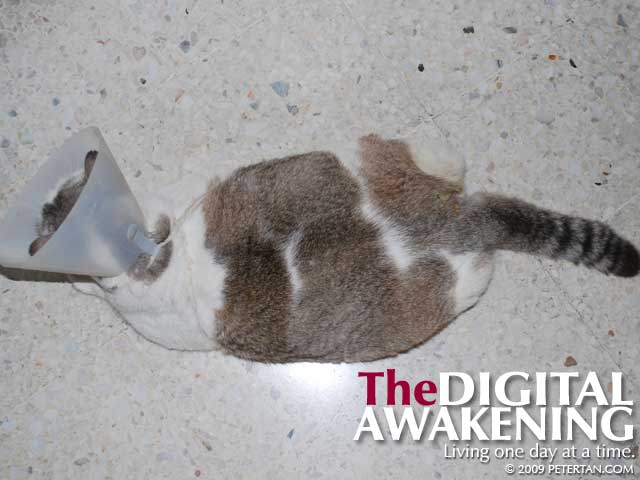 When Fei Por first came and made our home hers three years ago, she was already rotund, hence the name. Her idea of exercise was to walk from the basket where she slept and napped to her feeding bowl a mere meter away, and going out of the compound to do her business. In the three years that she has been with us, she had at least three litters of kittens but none survived. That was when we decided to spay her.

Occasionally, she would chase away female cats that dared to stray into her territory; male cats she allowed to come into the garden. That was how she got fleas on her and consequently the sore from licking the spot where the fleas made their home on her. That was also about all she did. Wuan even had to get a mouse trap to catch the rats that have been terrorising the garden. Fei Por just could not be bothered with the rodents scampering all over the place.

We have kept her in the house the past month because she is wearing a cone collar. We do not want her to get caught at the gate while squeezing through the grilles. The sore on her buttocks has healed. We will let her out after the scabs have fallen off, which is any time soon. Hopefully, she will not get anymore flea infestations after this.

She has balloned up even more since staying inside. She still gets the same amount of food. We attribute the obesity to her extremely sedentary lifestyle. She eats and sleeps only. The toys that get Cheeky excited do not work on her. She would just look at them nonchalantly. She would not move to allow me to pass even when she was blocking my way. That is how lazy she is.

If she continues putting on weight like this, she is going to resemble Totoro soon. We are not sure if she can go out through the grilles or not now. She already had problems going through the last few months. She definitely has to go on a diet after we let her out. It would be a tragedy the day we have to cut the grilles to release her should her belly gets stuck in between. 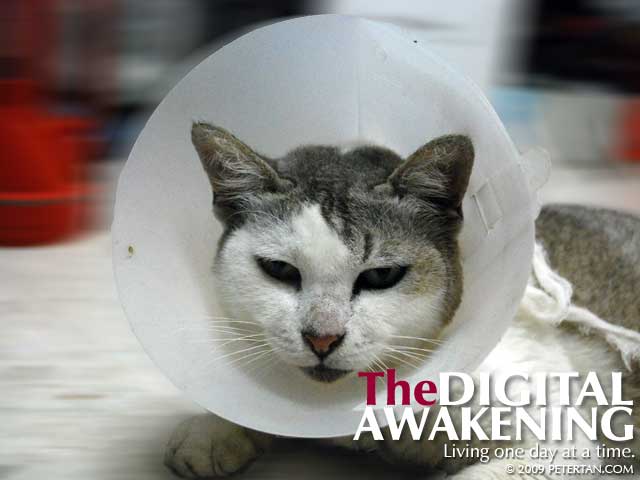 Fei Por with the cone collar.
Photo by Wuan.

“I come in peace. Take me to your leader.”

Fei Por has been wearing the cone collar since the day we took her back from the vet in Ipoh last Friday. She has an open sore that she kept licking, making it raw. It looked painful. The collar has effectively prevented her from doing that. The sore is healing day by day. She was also prescribed antihistamines, antibiotics and iodine solution. Although she refuses to take the tablets, Wuan has little problem making her swallow them.

We have to keep her in the house to prevent her from wandering around the neighbourhood for now. Hopefully the collar can be removed soon so that we can let her out. She looks uncomfortable and miserable cooped up inside. Cheeky is not helping either by playing rough with her every now and then although she is very patient with his antics.