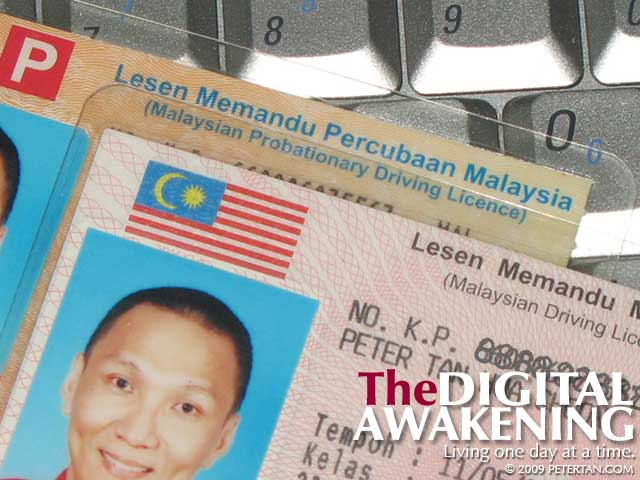 My Malaysian Probationary Driving License (PDL) expired last Sunday. Thankfully, that was one day after Wuan and I went to Ipoh to celebrate Mother’s Day as Wuan’s driving license had also expired. We stayed home on Sunday as I had to collect my urine for a period of 24 hours for the 24-hour urine creatinine test. Wuan renewed her license at the post office on Monday morning before we went to the hospital.

We had planned to renew and change the license after dropping off the urine and got a blood sample taken. By the time we were done there, it was already twelve noon. We took a chance to go to the JPJ office at Padang Jawa even though it was almost time for lunch break. We reached there at 12.15 pm and quickly made our way into the building, got a queue number and waited. The waiting area was rather crowded.

Before we could even settle down, it was already my turn. Wuan passed my expired license, a colour photograph and RM150 to the officer to renew it for five years. The bottom right edge of the expired license was snipped off and returned. Less than one minute later, the officer presented the spanking new Malaysian Competent Driving License (CDL) to me. I looked at my wrist watch when we got out from the office. It was barely 12.25pm. The speed and ease of renewing the driving license was astonishing.

For the past two years, I had enjoyed the freedom of mobility that came from driving. Wuan and I had done more things, went to more places and travelled further than we could ever imagined. Doing what I am doing now, having a car is not only a convenience but a necessity. If the public transport is accessible, I would not be driving this much, especially around Kuala Lumpur. Ah well…

Nevertheless, driving was one of the things that I thought I could never do again after the accident. Having achieved it, I credit this to the good friends around me who gave me encouragement and support in this endeavour, and especially Wuan who drove me to driving lessons and did everything she possibly could to help me achieve this. Thank you all! You know who you are.

An interesting piece from BBC via Wheelie Catholic. Too bad this is in Birmingham and not in Malaysia.

The city council has vowed to take tough action against those caught, threatening fines of up to £1,000.

Hundreds of people had already been caught, council leaders told an investigation by BBC’s Inside Out in the West Midlands.

A blue badge can only be displayed if the permit holder is using the vehicle.

Transport chiefs said the most common misuse was people using badges awarded to their relatives, without the relatives being in the car.

However, people had also been caught using fraudulent badges.

Currently, wardens only have the powers to tow away the offending vehicles and to issue a fine of £140.

However, the city council said it would now start using private prosecutions to bring people to court, which would allow them to impose higher fines and leave the drivers with a criminal record.

Extra patrols will also be out on the streets catching those flouting the law. 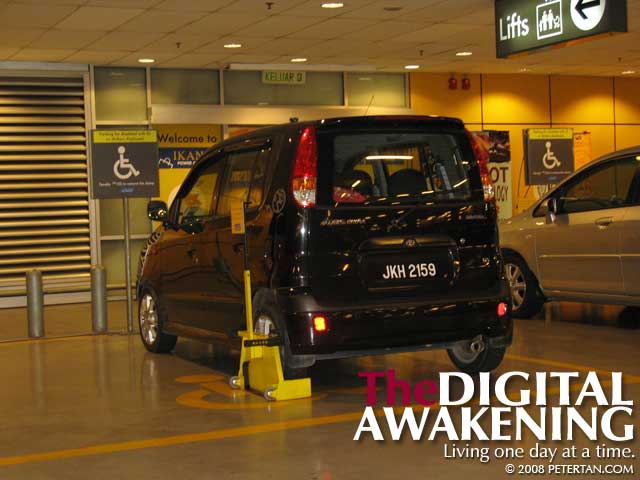 In Malaysia, offenders mostly get away with less than a slap on the wrist. Ikano Power Center is one of the few shopping complexes that enforces clamping of vehicles that do not display the wheelchair logo parking in spaces allocated to disabled people. However, no authority is responsible for issuing official parking stickers to disabled people that is recognized throughout Malaysia. Majlis Perbandaran Subang Jaya is issuing similar stickers but only to residents of the municipality for parking spaces managed by the council which I have spoken out against. Apart from that, anyone can print the logo and display it on their car dashboard and claim the right to park in such spaces.

The public must understand that such parking spaces are there for a reason. They are extra wide to allow for sufficient space to place a wheelchair beside the vehicle for the disabled person to get in and out. I have come across drivers who conveniently parked their cars in the accessible parking spaces at Mid Valley Megamall and Tesco Ipoh when they were not even walking with a limp. By occupying these spaces, non-disabled drivers are depriving disabled drivers a place to park their vehicles. We are unable to use regular-sized parking spaces. If our cars are sandwiched between two vehicles in such parking spaces, we will not be able to get out or into the cars because the car door cannot be fully opened due to the close proximity of the vehicles. 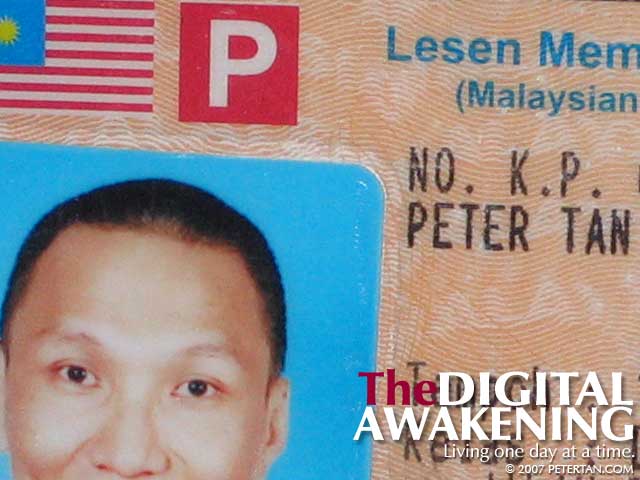 This Malaysian Probationary Driving License is valid for two years. Barring an driving offense that may result in this license being revoked and cancelled, I will be issued with the CDL (Malaysian Competent Driving License – Lesen Memandu Kompeten) after the probationary period. Wuan and I collected the license from Safety Driving Centre. I then attended a press interview with other members of BEAT.

Wuan and I went off to 1-Utama for lunch, shopped a little after which I drove all the way back. Being on the wheel again after twenty three years evoked so many emotions. I never thought I could drive again. That was the reason I stopped renewing my driving license ten years ago. My desire to drive again was inspired by Kuan Aw and Christine.

Now that I have obtained my driving license, William sowed the seeds of a long road trip in my mind to celebrate this milestone with Cynthia and Wuan. Penang? Ipoh? Melaka? My driving now is inconsistent at best. However, I am confident that I will be able to pick up the finer points in a very short time. There are some things that one does not forget. Driving is one of them. This is another momentous step in the liberation of Peter Tan.