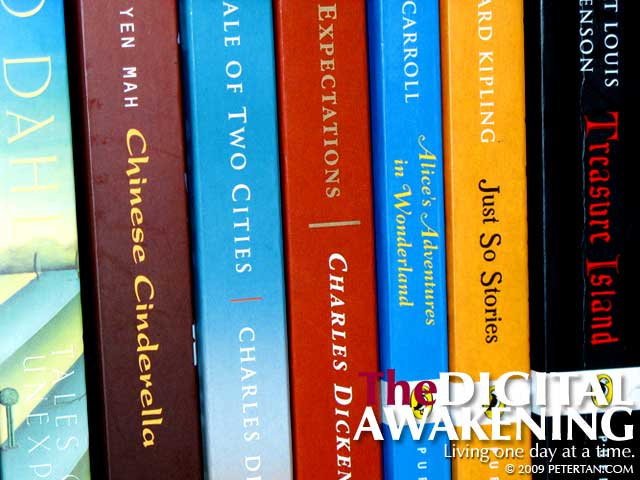 Wuan and I raided the Pearson & Penguin Books Warehouse Sale three weekends in a row. When the security personel saw us there for the third time, I waved at him. On the second time we were there, he had asked Wuan to drop me off at the entrance as we had to park quite a distance away. We told him in unison that I was driving.

“Third round,” he stated as a matter of factly.

The books were stacked under a zinc roof erected over the car park of Pearson Malaysia. There were children, non-fiction and fiction sections. Nevertheless, one has to be patient in searching as the books were not organised like what one would expect in a book shop. We have no complaints though. This was after all a sale with the books being offered at greatly discounted prices.

Between the two of us, we spent more than RM400 the three times we were there. I bought classics mostly. Wuan bought the series by Terry Brooks. At the rate I read, these books will last me for at least one year, coupled with the more than ten books that I brought down from Penang which are still unread.

The good thing is that I have started to read again, seriously, and spending less time online. I have always wondered what I would do if there was no Internet. What did I do before I discovered the Internet? I read! And I watched television. I do not watch as much as I used to now as most of the shows on Astro are repeats. I have been feeling stupid lately with all the unproductive time I have been spending online. Hopefully, reading will make me a little less stupid.