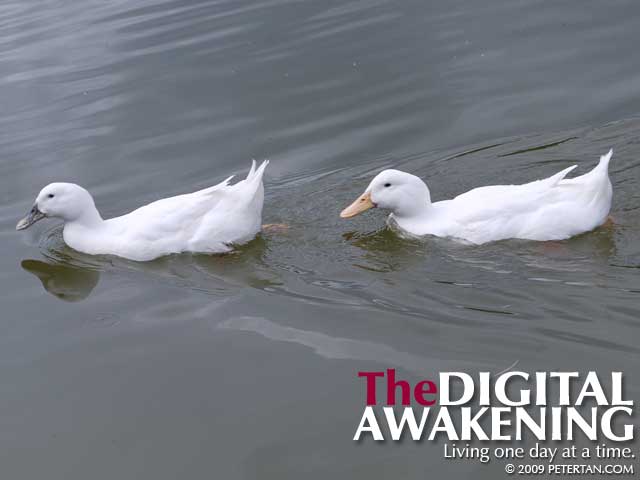 There were at least 200 of us, Boy Scouts, Venture Scouts and Girl Guides, forming a horeshoe around the bonfire. The healthy flames rose four or five feet. The bakau wood popped and crackled. From where I was standing, I could feel the heat on my face. We were all basked in a glow of orange, singing and clapping merrily. That is what I remember most about my Scouting days.

Until today, I can still sing some of those songs that we sang during Jamborees, JOTA (Jamboree On The Air) campfires and gatherings. These events were organised by the various Scout troops Girl Guide companies in the disctrict. Among the songs that have stuck in my mind are Ging Gang Goolie, Brownsea Island, Millipede Dance and This Little Scouting Light.

The ducks at Sentul Park reminded me of my favourite campfire songs – Two Little Ducks. It is an action song. We would all walk in Indian file mimicking the actions in the lyrics. Those we the days. How I miss them so. At one stage, I spent so much time in Scouting activities that Dad became worried that I was neglecting my studies. He was right. I did not do that well in SPM. Still, I have no regrets. Those were the best days of my schooling life.

Two little ducks that I once knew
Fat one, skinny one, two by two
But the one little duck with a feather on his back
He ruled the others with a quack quack quack

Down by the river he would go
Wiggle waggle wiggle waggle two by two
But the one little duck with a feather on his back
He ruled the others with a quack quack.