Despite assurances by AirAsia CEO Datuk Tony Fernandes on July 20 and again on August 4 this year that disabled passengers will be treated with dignity, the airlines is still subjecting disabled passengers to discriminatory policies. I personally experienced this recently and I am not pleased at all. Even though I am part of a group that is working with AirAsia in addressing issues related to disabled passengers I am going to reveal this as I do not take lightly to being subjected to such practices.

Wuan and I flew from Kuala Lumpur to Kota Kinabalu on October 27 without incident. We were allowed to board first. AirAsia’s ground crews carried me up the boarding stairs and into the plane. Wuan took the window seat. I was seated next to her in the middle. A young woman took the aisle seat. We had a wonderful flight and were all praises for AirAsia. 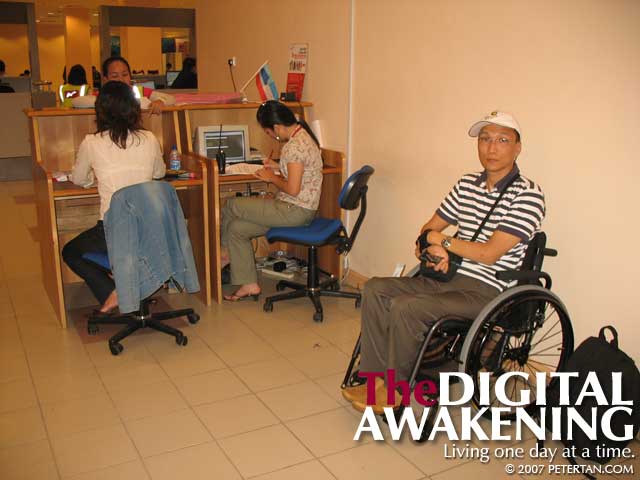 Not looking too pleased while waiting for an AirAsia staff confirm with
her boss whether I needed to sign the indemnity form or not.

Our journey back to Kuala Lumpur on October 30 was another story. I was required to sign an indemnity form to release AirAsia from all liabilities. I protested vehemently but was informed that if I refused I would not be allowed into the plane. When asked why I was not required to sign an indemnity form on the previous flight, the officer said she does not know but that was a requirement and I had to sign no matter what. I called up a staff from AirAsia Academy regarding this but she could not do anything.

I also witnessed several other disabled people on flights different from ours signing the indemnity form. As we did not want to miss our flight back, I relented but indicated in the indemnity form that I was signing under protest at being discriminated based on my condition. I paid the full fare like other passengers in the same flight but by signing the indemnity form, I was agreeing to give up my rights to hold AirAsia liable for damages, injuries or other claims even if those arose from the negligence of the airlines. 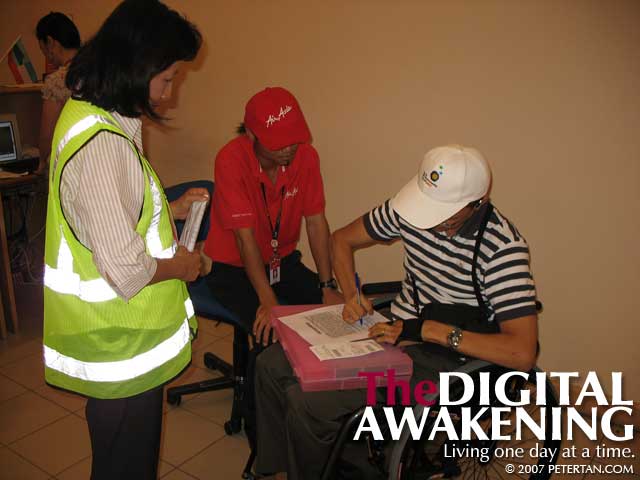 Signing the AirAsia Release and Indemnity Form under protest while two AirAsia staff looked on.

This in essence deprived me of the same rights as other non-disabled passengers. In AirAsia’s eyes, a disabled passenger is a person who has no rights whatsoever. By carrying me, I was supposed to be grateful. If I was injured, well, too bad. Additionally if I made AirAsia incur additional expenses due to their generosity in allowing me to fly with them I had to reimburse the amount. Where is justice in this?

The most preposterous part of this all was the last line which indicated that I signed the form on my own free will and was not under the influence of AirAsia or other parties. I was arm-twisted into signing it or risk missing my flight and AirAsia has the gall to add this nonsensical line which was truly adding insult to injury. 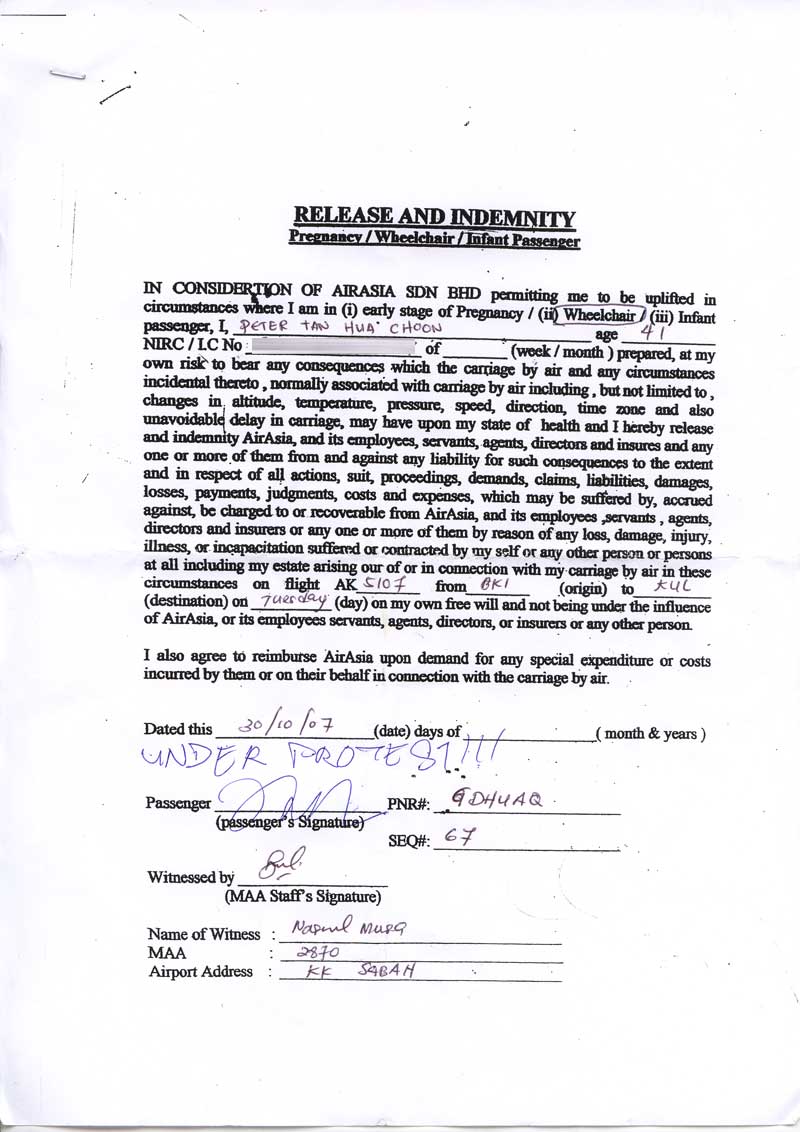 Release and Indemnity Form that AirAsia made all
wheelchair users sign at Kota Kinabalu International Airport before we
were allowed to board the aircraft.
Click on image for larger version.

That was not all. I was allowed to board first. One of the cabin crew indicated to the ground crews who carried me into the plane to place me on the bulkhead seat. I insisted on being seated on the second row. After kicking up a fuss, the cabin crew reluctantly agreed. I have poor balance. Bulkhead seats have extra space in front which does not give me anything to hold on to when the plane lands and decelerates. The sudden change in momentum will throw my body forward and may cause injury.

Instead of changing seats with Wuan, I took the aisle seat. The same cabin crew again approached me. She refused to listen to my explanations and was adamant that I take the window seat, citing that she had consulted the safety officer who was on-board. The reason was that I would be blocking other passengers’ path in case of an emergency evacuation if I was seated anywhere other than window seats. Not wanting to create a scene or being sent off the plane, I agreed to that too. Some disabled passengers are unable to move from the aisle seat to the window seat. I would like to see how AirAsia deals with that.

It is evident that AirAsia is not consistent in its policies with regards to disabled passengers. After those two incidents, I will never ever fly with AirAsia again unless they remove those discriminatory conditions imposed on disabled people no matter how attractive their air tickets are priced. I will not tolerate discrimination against disabled persons like those perpetuated by any party. Never mind the promises made by Datuk Fernandes. AirAsia is still practicing discrimination against disabled people. Most of all, AirAsia has ruined the beautiful memories I had in Kota Kinabalu on my honeymoon.

In December last year, Malaysia Airlines made Professor Yutaka Takamine sign an indemnity form before allowing him to fly from Japan to Malaysia to speak at the Real Access for Life (ReAL) Roundtable (Persidangan Akses untuk Kehidupan Sebenar) organised by the Ministry of Women, Family and Community Development. Professor Yutaka revealed this to Dato’ Seri Shahrizat who opened the conference. Malaysia Airlines later apologised to Professor Yutaka and indicated that it was a mistake and not a policy to compel disabled passengers to sign indemnity forms. AirAsia better take note of this.

AS a wheelchair user for the last 23 years, I am absolutely upset with Jerai member of parliament Datuk Badruddin Amiruldin for telling fellow-MP Karpal Singh that the latter’s use of a wheelchair is a punishment from God (“Kar-pal: Lawyer wrote part of judgment for civil suit” — NST, Oct 23).
Badruddin’s remark is an affront to all wheelchair users, implying that our condition is a punishment and that we are all sinners.

I have been using a wheelchair long enough to have experienced many times such drivel from holier-than-thou people. People must be educated that being disabled is one of the things that can happen to anybody. People can become disabled. People can become afflicted with diseases. It is part of life.

He should be working towards empowering disabled people instead of insulting us. After all, he was elected to serve the people and not otherwise.
I call on Badruddin to retract that statement and apologise to all wheelchair users and the disabled community for such an insensitive remark. It does not matter if he was targeting Karpal.

His utterance smacked of insensitivity and ignorance and has insulted the dignity of all wheelchair users.

THE Society of the Orthopaedically Disabled Malaysia is disappointed with the statement made by Badruddin that the disabled in wheelchairs have been punished by God. The statement was uncalled for.

THE Malaysian Spinal Injuries Association is outraged at the offensive remark made by Badruddin during the parliamentary session on Oct 22. Referring to MP Karpal Singh, he said: “You are no better calling us (BN MPs) animals. You insult people. Now you are in a wheelchair. God has punished you.”

Disability is not a punishment from God. Badruddin reveals his insensitivity and ignorance in making such a statement. The lack of dignity and decorum shown by several MPs during parliamentary debates recently is appalling.

Instead of abusive personal attacks on fellow MPs, they should focus on fulfilling their responsibilities to their electorate.