Wuan and I had a productive day yesterday. Early in the morning, we were at UMMC for my first ultrasound of the kidneys and bladder there. After circling around the hospital compound several times looking for a parking space Wuan dropped me off at the drop off zone to find a place to park as I was already late for the appointment. Nothing new from the radiologist’s initial observation – hydronephrosis of the kidneys, left kidney athropied and a neurogenic bladder. In short, my kidneys are in a bad shape. 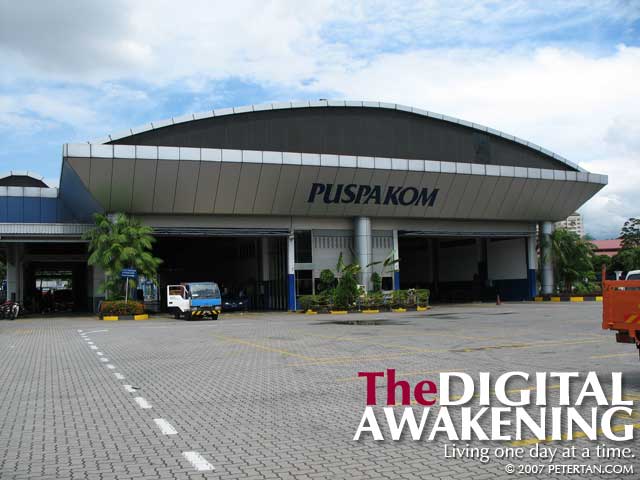 After the ultrasound, we went to Wangsa Maju to have the car inspected at Puspakom. We needed to get the hand control attachment inspected and then get the vehicle registration card endorsed by the JPJ. The inspection cost RM15. The officer checked the chassis and engine number, briefly glanced into the car cabin, asked Wuan what the attachment under the steering column was and nodded when she explained. Wuan had to remove the tinting film on the front windscreen because it did not allow enough light through.

When we finally got the inspection report, it was already 1230pm. The JPJ Wilayah Persekutuan for was just next to Puspakom. We wanted to get the vehicle registration endorsed on the same day to save us the trouble of having to go all the way there again. After lunch, we went to JPJ. An idiotic motorist parked his motor just beside the car. There was a slight drizzle. We wondered if I should go with Wuan to get the endorsement or wait for her in the car. We finally decided that it would speed things up if the officer saw me in person.

There as just enough space to open the car door on my side. After I transferred to the wheelchair, Wuan retreated a little to allow me to back out my wheelchair. When I heard her shriek, I thought I had rolled over her toes. She had actually burnt herself on the exhaust pipe of the motorcycle. We cursed under our breath as that space beside our car was supposed to be left vacant for wheelchair users’ ease of movement into and out of the car. Fortunately, the burn was not that bad.

We went to the customer relations office to get the officer to assist us with the procedures of getting the endorsement. He filled up some forms and directed Wuan to a counter one floor above. All was completed in thirty minutes. That was another major hurdle conquered. Wuan and I were upbeat and chatted merrily on the way back. I can almost feel the exhilaration of driving legally soon.

We went back to pick up William and Cynthia who had agreed to accompany us to pick up Wuan’s digital camera at Canon Malaysia’s head office office at Shah Alam. The LCD screen of her Canon Powershot A95 could not display images properly during shooting mode but could display the images from the compact flash. The officer who served Wuan a few week earlier believed that it was a connection problem. The problem was rectified at no charge. The memory card cover of the same camera was also broken. It was replaced at RM35 – very expensive for a small piece of flimsy plastic.

That was a full day for us, running all over the Klang Valley. Later today, William, Cynthia, Wuan and I are going out for our usual weekend movie outing. It has been a while since we have watched a movie as we were busy with work respectively. I am looking forward to a relaxing evening. After several busy weeks, I really need this pick-me-up to propel me into another hectic week.