When Wuan and I started dating about ten years ago, I wrote a number of poems that were dedicated to her. These poems were put up at Geocities and the website aptly titled “Poems for Wuan.” When I got my own domain name and hosting, I parked the website under the subdomain wuan.petertan.com.

A while later, I registered wuan.org and moved the site there. After I presented Wuan with a digital camera, the poems were taken down to make way for her photoblog called “Point and Shoot.” This photoblog is currently undergoing a facelift.

Since then, I have been wondering how I could put these poems back online again. I want the website for these poems to be a labour of love but I have yet to find the inspiration to create one. As such, I have decided to post these poems in this blog first until such a time I get down to building a permanent domain for them.

I can still remember
how you looked
the first time we met
that disarming smile
those gentle eyes
and lips so sweet
gosh
if only you are
the last I see
before I sleep
and the first
when I awake
I’d be happier
than pigs in a puddle. 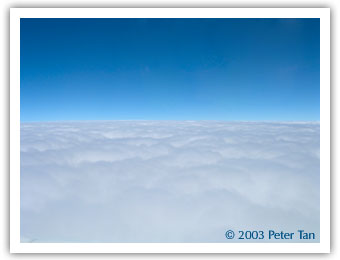 We soared above the garden of clouds
With a prayer and on wings of faith
To be near where the angels crowd.

Wuan took that photograph on our way to Penang from KLIA. We were flying somewhere over Perak. As the plane emerged from under the clouds, a carpet of feathery white greeted us. We could almost feel the fluff under our feet, white and cottony as far as our eyes could see. The cerulean ceiling stretched into infinity, infusing in us a sense of interminable tranquillity.

“We are in heaven,” Wuan remarked.

Indeed, for a moment it felt as if we were, and I wondered if I could see Mum up there. That was only the week after I had interred Mum’s ashes. The grief was still very intense then. As I looked out the window, I really wished I could see Mum somewhere out there amongst the clouds for just one more time. 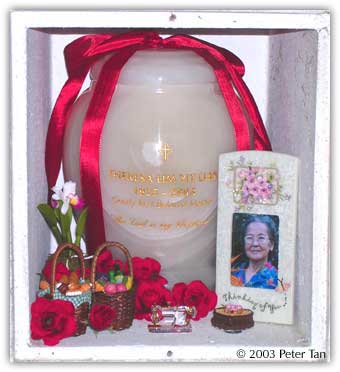 Gently rest beloved Mother
And listen to the angels sing
They came and took you hither
Where you?ll be eternally rejoicing.

One hundred days have passed. My tears may have stopped flowing but the beautiful memories of you shall live on. How can I forget such a wonderful person like you? You had touched my life in more ways than one. You were a mother, a confidant, a friend and more. You are the epitome of motherhood. You had coloured my life with the hues of altruistic love and compassion. I shall miss you dearly. Gently Rest Beloved Mother.