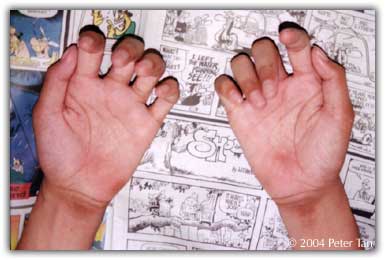 This photo was taken circa early 1999. Wuan and I just started to chat online. I had that shot taken to show her the condition of my hands. It does not reveal much actually. In reality, I have about 20% to 30% functional use of them only, depending on the tasks. That is due to the fact that my thumbs are of little practical use. I have difficulty picking up coins and similar sized and shaped objects. It takes a lot of exertion to grip a pen and write. I use a fountain pen mostly because it requires less effort to write with one. I select what I eat prudently. Holding a spoon is laborious enough, let alone removing meat from bones or cutting through steaks. Picture this: Going about your daily routine wearing a pair of boxing gloves all the time. That pretty much sums up how much use I have of my hands.

For as long as I have been paralysed until Mum’s demise, her hands performed all the tasks that needed delicate finger movements for me. I did not know how fortunate I was until I had to do those tasks by myself. Her hands not only rocked my cradle, they became the hands that I no longer had control of. This was on top of having to perform daily chores like cleaning and washing, and doing what she loved best – gardening. Mum had green thumbs. Anything that she sowed thrived and bloomed. She was a great cultivator, not only of plants but of humans, too. She lifted me up and nursed me back to health. Despite all the hard work she had to endure to look after me, she never considered me a burden. Truly, I tell you, Mum’s love for me knows no bounds. HAPPY MOTHER’S DAY MUM, wherever you are.